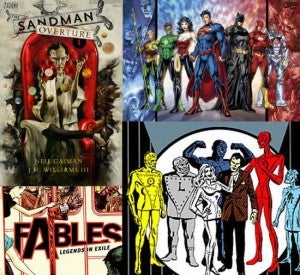 What DC Comics properties will be next to make it to the big screen? If DC Entertainment Chief Diane Nelson gets her way, then it will be Sandman, Fables, Metal Men, Justice League, and Aquaman. When The Hollywood Reporter asked Diane Nelson what five DC characters or titles she would like to see on the big screen, she replied, "Sandman is right on top. I think it could be as rich as the Harry Potter universe. Fables. Metal Men. Justice League. And yes, I'm going to say it: Aquaman." Now, before her comment gets written off as just a wishful list of her personal favorites, it's interesting to note there is other evidence to indicate that she might have just rattled off Warner Bros. actual plans. At last year's San Diego Comic-Con, DC Comics surprised everyone by announcing that Neil Gaiman was returning to do a new Sandman series. How did DC Comics convince Neil Gaiman to come back? Could it be that they indicated they had bigger plans for Sandman, including a movie? That Nelson would list Sandman at the top, certainly suggests that it's a real possibility. For the other four movies on Nelson's list, there have been recent reports and rumors indicating that Fables, Metal Men, Justice League, and Aquaman are all in development. We think Nelson's list isn't just what she would like to see next, but we think it could very well be a list of what fans will actually see next after Man Of Steel 2.