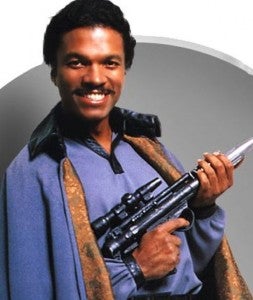 At Dragon Con this weekend, Billy Dee Williams, who played Lando Calrissian in the Empire Strikes Back and Return Of The Jedi, revealed that he wants to return with a beautiful Jedi daughter for Star Wars Episode VII. He also revealed that there's a popular CBS television show that he would like to make a guest appearance on. When asked if there were any shows that he would like to guest star on, Billy Dee Williams said, "Big Bang [Theory] is my favorite show. I've got to tell you the dialogue is some of the most brilliant dialogue I've ever witnessed. And those actors, that ensemble cast is just amazing to me." Williams continued, "It's scary for me. That whole situation scares me. Sitcoms, they are not easy to do. They are very hard to do. You've got to be really quick. And I'm not so quick a lot of the time. But that would certainly be one of them." Williams also added, "If I didn't have my…my back has so gone out on me, but if I was a little bit younger, a show that I find…the people who do Dancing With The Stars. That is absolutely , totally amazing for those people that do it."