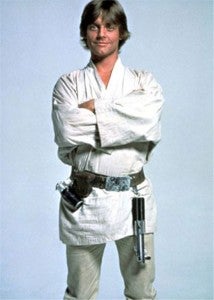 Mark Hamill is out doing publicity for his new film Sushi Girl, so you know what that means. Yes, it means reporters have an opportunity to ask him more questions about Star Wars Episode 7. Not surprisingly, Mark Hamill is playing it rather coy about his future involvement in the Star Wars franchise. In an interview with EOnline, Mark Hamill actually indicated that he himself had questions about returning for Star Wars Episode 7. Hamill said, "And really, they're not even at the stage where they're able to answer those questions because, as far as I know, is there a story yet?" While professing his love for his former Star Wars costars, Hamill said, "Until I know more about what they have in mind, I think it's better to let Lucas Film make the announcements." Hamill also indicated that Disney would have no problems finding an age appropriate actor if the story called for a Luke Skywalker that too young or too old for him to play. While Hamill might not think Disney has a story yet, he did have compliments for screenwriter Michael Arndt, who was officially brought in to create the script. In an interview with SFX, Hamill said, "Yeah. He's a very talented guy, very clever." As far as how Mark Hamill would like to see Luke Skywalker portrayed in the films, Hamill mentioned being an elderly recluse, a Jedi trainer, or married with a kid like in the books.  When SFX told Mark Hamill that Disney was supposedly diverging from the books, he seemed surprised. Hamill said, "They are? Okay… Because I had a beginning, a middle and an end. And when I finished, I never, ever dreamed that we would do any more movies. And so I really sort of let it go."