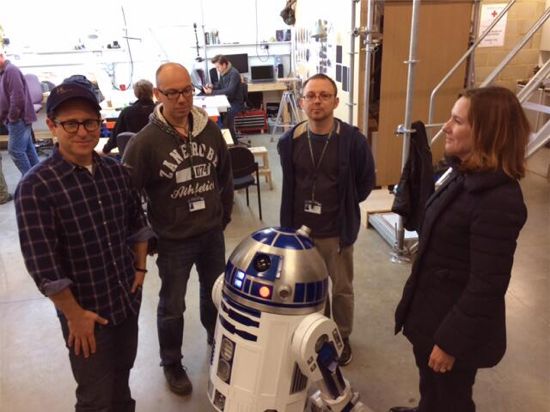 Last week, J.J. Abrams' production company released the first behind-the-scenes photo from Star Wars: Episode VII. The photo featured director J.J. Abrams, Lucasfilm president Kathleen Kennedy, and R2-D2. While most took R2-D2's presence in the photo as confirmation that he would be part of Star Wars Episode VII, Lucasfilm has not officially confirmed that assumption was correct. In addition to confirming R2-D2, Lucasfilm aslo revealed that the two mystery men appearing in the photo are Lee Towersey and Oliver Steeples, who are Star Wars fans and members of the worldwide R2-D2 Builders Club. They create fully functioning, film-accurate astromech droids like the R2-D2 seen in the photo, and they've been officially hired as part of the Creature Effects team for Star Wars: Episode VII. "It all started when Kathleen Kennedy toured the R2-D2 Builders area at Celebration Europe this past summer in Germany," said Steeples. "She posed for pictures with us, looked at all the droids we'd built and was very complimentary. I mentioned that the R2-D2 Builders in the UK were available if required, as a semi-joke. When I was contacted to work on the film by [executive producer] Jason McGatlin, it was on her recommendation." "We know the pressures of filming, prepping, and being able to assure reliability throughout the shoot," says Towersey. "We have a good knowledge of Artoo, with a large stock of parts for reference and drawings, plus we know what is involved throughout the whole building process, as well as potential problems we need to avoid." "What we do need to do is improve on the mechanics," adds Towersey. "We're currently in a research and design phase where we're looking at drive options for reliability on all possible terrains, whether it be a one-motor-does-all, or a system which is easily adjusted depending on terrain. We have a few mocked up ideas which we hope to road test very soon." "It's a dream come true," adds Steeples, "and I hope I can live up to the expectations of the thousands of R2-D2 Builders around the world, let alone the millions of Star Wars fans."