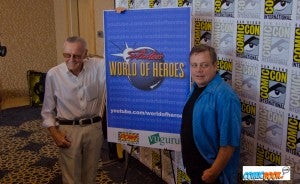 Star Wars star Mark Hamill appeared on Current TV's The Young Turks to discuss his recent, surprising foray into politics on Twitter. Having called Republican Presidential candidate Mitt Romney a "snake-oil salesman" on the popular social network after the first Presidential debate. "I debated in high school! If you told things that weren't true or just made things out of whole cloth, you were penalized. It's too bad they don't apply the same standards to presidential candidates as they do to high school students... I'm surprised at people who have a passion for Mitt Romney, because he's taken every position there is. I would cast this guy as the president as a heartbeat...but I just cannot believe a word he says." The famed actor, most recently known as The Joker in a number of Batman-related animated and video game projects, also praised President Obama (comparing him to Obi-Wan Kenobi) and took aim at the Bush Administration in the appearance. "I don't think it's fair to compare Dick Cheney to Vader -- it's unfair to Vader," Hamill joked, explaining that Vader eventually redeemed himself.