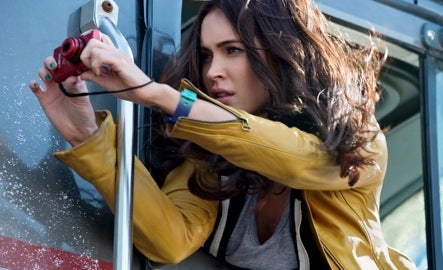 During a brief, new interview with UK film magazine Total Film released this week, Teenage Mutant Ninja Turtles star Megan Fox revealed that her character was originally a bit tougher in the film -- but a scene in which she held her own in a fight was cut.

"Unfortunately, my best kick-ass scene was cut because it seemed out of place for April, this skinny journalist, to suddenly turn into this martial arts expert and start beating up people," Fox revealed.

Of course, it's not exactly uncommon for reporters to take self-defense classes. Investigative or undercover journalists need to be able to take care of themselves when the subjects of their investigations become hostile, as do reporters covering war zones or even civil unrest at home and abroad. Many reporters who covered Occupy Wall Street had to learn the basics to minimize damage done to them by trampling crowds, swinging batons and angry protesters at various times in the course of weeks of coverage.

Still, the fact that they start her out covering soft news probably lends itself to director Jonathan Liebesman's interpretation...!

Ninja Turtles is in theaters now.