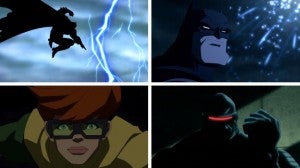 Peter Weller, best known to movie fans as Buckaroo Banzai and RoboCop, will play Batman in the upcoming animated feature film adaptation of Frank Miller's Batman classic The Dark Knight Returns, according to a story at The Hollywood Reporter's Heat Vision blog. Younger fans may recognize Weller as Mr. Yin, the depraved mastermind behind the Yin/Yang killings on the USA Network show Psych. Frank Miller, who wrote and drew the original miniseries, has ironically also worked on RoboCop a few times over the years. "Dark Knight Returns is the granddaddy of beloved comics properties that we've ever attempted (to adapt)," DC Animated Universe godfather Bruce Timm told THR. "There is definitely the imperative to get it right." It's also the first DC animated feature to be split into parts in order to give the story more breathing room; while the first part of the film will be released in the fall, part two is scheduled to hit shelves in 2013. With a little luck (given how short the DC animated features are), someone will cut together a "complete edition" for Blu-Ray which will allow fans to watch straight through the two hours-and-change that the pair of 70-minute films will eventually make up. Aiding Weller's caped crusader will be Ariel Winter (from Modern Family) as The Dark Knight Returns' female Robin, Carrie Kelley. Wade Williams from Prison Break will star as Two-Face, while Michael McKean (the comic genius from Clue and This is Spinal Tap, among many others) will be a psychiatrist from Arkham. The original report says that David Selby from the original Dark Shadows will star in the film as well, although it fails to identify his role. A safe bet might be that Selby will star as The Joker, considering that the character (who plays a major role in the story) is notably absent from the cast list--but then again, so is Superman. McKean may have chosen a dangerous way of researching his role as a doctor; he's currently in stable condition at a hospital in New York after being struck by a car yesterday afternoon. Man, that's method. Jay Oliva will direct the film; Oliva is best-known among comic book fans from his work on Green Lantern: Emerald Knights. He's also working on the upcoming Zack Snyder Superman film Man of Steel as a storyboard artist, according to THR.