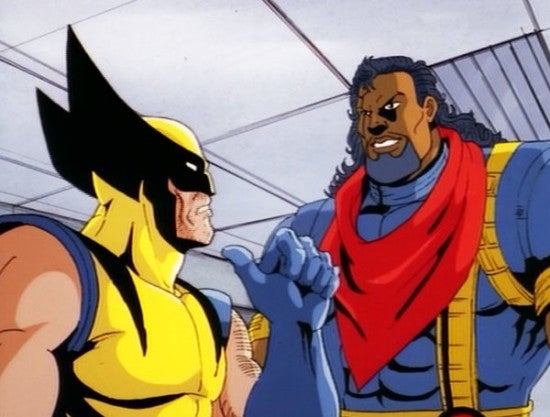 While this weekend's feature film adaptation of Chris Claremont and John Byrne's X-Men: Days of Future Past is expected to gross more than $100 million domestically and be one of (if not the) biggest opening in the history of the X-Men film franchise, it isn't the first time the classic '80s story has been adapted. No, a version of "Days of Future Past" appeared on the fan-favorite '90s X-Men animated series, which aired on Fox Kids' Saturday morning lineup from 1992-1997, and was released on VHS as a double feature with "The Night of the Sentinels." (There was a similar storyline in Wolverine and the X-Men, too, but it isn't a direct adaptation so we won't discuss it here. According to Wikipedia, Professor X is in a coma for 20 years, and awakens to find that the mutants are imprisoned by the Sentinels. He telepathically connects with the X-Men of the past to try to prevent that future from happening. By the end of the first season, the Sentinel-dominated future was averted. However, a future based on the Age of Apocalypse appeared in its place. Strangely, this closely mirrors one of the most popular theories fans had in the run-up to X-Men: Days of Future Past regarding how the movie would feed into X-Men: Apocalypse.) 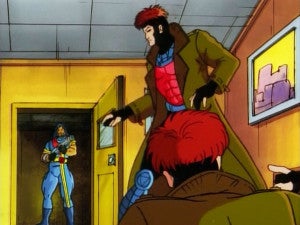 As with the feature film, the animated version took a lot of liberties with the comics on which it's based -- but how do the two compare? In the animated version, The Sentinels look more like they did in X-Men: The Last Stand's Danger Room sequence -- which is to say pretty much like the comics (although in both the comics and cartoon, the red-and-purple color scheme makes it in, whereas in The Last Stand, the head is grey and black, as you might expect from the film franchise. The cartoon starts more or less the same way as Bryan Singer's movie did -- with a look at the bleak, Sentinel-dominated future. In the animated version, we don't see a brutal and action-driven death scene for a half-dozen characters, but instead get a glimpse at their tombstones (we'll forgive the fact that they're conveniently just kind of out there in the middle of everything and nobody besides the X-Men seemed to have been buried there). Arguably the biggest difference is that in the animated series, Bishop travels back in time instead of Wolverine (although the plan was to do Logan), whereas in the movie, it's Wolverine who travels back, substituting for Professor X. He also can't quite remember why he arrived, so that when he goes back in time, he finds himself trying to cobble information together, which makes it more difficult to convince people of his mission or win them over. That he wants to kill the assassin rather than just stop the assassination is equally troubling for Xavier and company. Of course, it's worth mentioning, but probably not strictly necessary to do so, that Professor Xavier in this story -- whom we only see in the past, as his future self is likely already dead or at least not around -- doesn't have the crisis of faith that gave James McAvoy all that capital-A acting to do in the film adaptation.

While the movie version featured nearly every X-Man who has appeared onscreen before and some who hadn't, a number of characters played key roles in the animated version who either had only cameo appearances or didn't appear at all in the film. These include Forge (in the future), Jubilee, Rogue, Professor X, Cyclops, Jean Grey and Gambit. We also get a look at the super-Sentinel Nimrod (who traveled back after Bishop through the same time portal), although there isn't a ton of time to really let him shine. As a fun aside: at one point, Wolverine calls Bishop "Mr. Terminator here." That's not a bad parallel since in the new movie, many critics have noted that the time travel of Days of Future Past operates more or less like it did in The Terminator; things don't immediately start to change as soon as you make the first minor, butterfly effect-driven alteration to the past, instead waiting until the time traveler returns, basically, and then creating one massive wave of change all at once. Another fun aside is that Bishop calls Gambit "traitor." Lots. Funny since it's an aging Gambit who, in the original comics, sent Bishop back in time to look for a traitor against the X-Men (this may not have ever been clarified and verified but the implication was not ambiguous). For most of the story, there's no clear indication of who the assassination target is. Eventually it's revealed that it's Senator Kelly, a noted mutant opponenet in Congress, and that the assassin is Mystique, who was disguised first as his aide and then as Gambit. She monologues to Kelly before pulling the trigger, establishing for the Senator's bound-and-gagged assistant that the killing is the fault of the X-Men. Ultimately it's discovered that she is leading the Brotherhood of Evil Mutants, including Pyro, Blob and Avalanche, and working for Apocalypse. She escapes by convincing Rogue that she's her mother -- an ongoing storyline from the '90s that made its way into the cartoons -- and recruiting her to help with the escape. Mystique as Rogue's mother, rather than the weird co-dependent parent/child/sibling relationship between Chuck and Raven, is a relationship with similar dynamics to the film version. While Bishop is shunted back to the future at the end of the second episode of the two-parter, the story doesn't truly end. Bishop and Forge discover that it was all for nothing as the future hasn't changed at all, while back in the past (our present, Xavier and a couple of students are summoned to Senator Kelly's office to confer with him and find the place ransacked, the Senator having been kidnapped by Magneto. Next came the first season's finale. That's certainly a difference from the feature film where, if anything, the ending was a bit too explicit, spelling everything out and leaving nothing to the imagination (I liked it, but some of our readers compared it to The Lord of the Rings: Return of the King).

X-Men: Days of Future Past Movie Compared to the Animated Version From 1993