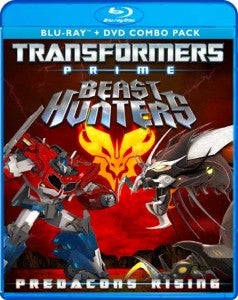 Out today on Blu-ray is Transformers Prime Beast Hunters: Predacons Rising. That's quite a mouthful, to be sure, but it's also the feature film conclusion to a fan-favorite animated series, a strange format decision in a show full of surprising approaches.

Transformers Prime has been, all along, basically a hodgepodge of different bits of continuity from previous Transformers cartoons, movies and comics--basically a rolling "greatest hits tour," incorporating elements of the histories of generations of the popular robot protagonists without letting itself get bogged down by all that continuity. It was essentially their way of rebooting the long-running cartoons so that they jived better with Michael Bay's blockbuster movie franchise.

And as a result, you get things coming in from those movies. The character designs certainly owe something to the Bayformers, and for the duration of the series--until the finale, anyway--Bumblebee couldn't talk.

When he did, it was Will Friedle whose voice came out, and so it's no surprise, given the popularity of the character and the extent to which he's a key part of the Autobots, that Friedle has a major role to play in today's Predacons Rising direct-to-video feature.

Friedle, who has also starred on Boy Meets World and Batman Beyond, joined ComicBook.com to talk about Beast Hunters, what it's like to work with actors whose work he loved as a kid and whether he'd like to continue on as Bumblebee in whatever the next iteration of Transformers cartoons is. 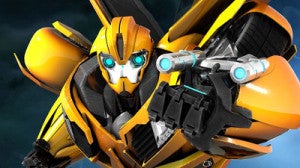 ComicBook.com: What was it like coming on late and joining the show's ensemble as it was a moving bus?

Will Friedle: It was incredible. It was one of those things where I joined in the last episode of the entire series and then did the movie afterwards. But I was a fan of not only the show but of the ensemble cast of actors for a long time. So being able to join playing anybody would have been amazing but getting to go and play Bumblebee was pretty incredible.

Being a fan of the show and a fan of the actors, I didn't want to go in and screw it up. The last thing you want to do is go in and be the weak link on this fantastic show. Hopefully I did the character justice, and the movie--which comes out Tuesday on Blu-ray--is amazing. Just absolutely gorgeous if you're an animation fan at all. It's all state-of-the-art and it's just beautiful from start to finish.

I started watching the original Transformers when I was a kid. It came out in '84 and I was eight years old so I was watching every day, running home from school. So to be able to be involved was pretty incredible.

ComicBook.com: And joining any show late in the run, you'll have that concern you were talking about, being the weak link, but you get guys here who have been playing the parts for thirty years and who have seen Bumblebees come and go. 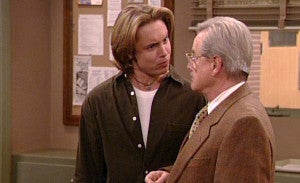 Friedle: Oh, yeah, of course. When you've got Peter Cullen and Frank Welker, you've got to those guys that started back in the day, you certainly don't want to make a fool of yourself when you walk into the room.

And you're right--they have seen the Bumblebees come and go so you want to go in there and make the best impression that you can, not just from an acting standpoint and a professional standpoint but from the standpoint of a fan, where you have been listening to them your whole life.

It was difficult to come in starting at the last episode but it was written so well that--that's when Bumblebee had to speak. You had to wait 'til the very end because it had to be a big deal and a big reveal. They absolutely did it right; I just hope I didn't screw it up.

ComicBook.com: When you and I were growing up, that wasn't a thing at all--I mean, Bumblebee talked all the time until the Bay films, right?

ComicBook.com: So when you tell people that you're playing Bumblebee in the new Transformers movie, do people immediately say, "Isn't that the dude who can't talk?"

Friedle: Again, it depends on who you talk to. If you meet a fan of the show and you say, "I'm playing Bumblebee..." at first, we kept it all secret. You didn't know if he was speaking or who was going to voice him. But the fans of the show really wanted to hear Bumblebee speak.

It just shows how incredible the writing of the series is when they can create the character so perfectly--give him all the depth, all the backstory, everything that you need. They wrote this brilliant character for the entire series of Beast Hunters and made it really easy for me to come in and give him his voice because the cahracter was all that. And they did all that without ever having him say a word. So it just shows the power of good writing where I could go in as an actor, sit down and know everything I needed to know about this character never having heard him speak.

It was, again, a real honor to be there and I really can't wait to hear the feedback from the fans when they see the movie because it answers a lot of questions and is, again, one of the most beautiful animated films I've seen in a long time. I think that people are really going to dig it.

ComicBook.com: When I spoke with the guys from Dan Vs., you basically had the two different approaches. We spoke to Maurice LaMarche, who of course does a billion different voices and then I spoke with Dave Foley, who basically is just Dave Foley in everything he does. It seems to me most of the Transformers characters are somewhere in the middle--is it interesting walking into an animation setting where you've got that kind of continuum in terms of people's performances? 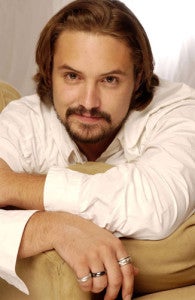 Friedle: It's one of those things where to be around that kind of talent always amazes me--when you see these men and women who can do forty voices, it's kind of amazing to sit back and watch. I think some of the greatest actors I've worked with in this business, in any aspect of the business, are the voice over actors. You sit down and you read it like a straight radio play and sometimes some of these actors are playing two or three characters on the same page. So it's pretty amazing to sit back and watch the pure talent take hold but many of the cartoons that I've been fortunate enouh to do tend to stay along the straightforward acting line where there's not a lot of real cartoony voices. I mean, yeah, I've done some--Kim Possible was pretty cartoony and Mad is very cartoony but then you do Batman and Thundercats and Transformers is all about the straight acting. So you get a chance to work with these actors who can do it all.

ComicBook.com: With Transformers, do you take a gig like this and sit down and say, "I hope they call me for the next one?"

I've had projects before that ended up not taking off where you'd walk in and it was a reboot of something or whatever and you get the producer who'd walk in and go, "Wow, I'd never heard of this project before they asked me to do it," and you kind of go, "Oh, okay." Luckily in this business on the V.O. side, that happens very rarely but when you do you're like, "Oh. Alright." As opposed to walking into something like Transformers or Thundercats or Batman where you know that the people in charge have been fans of the product for years. You know that the last thing they want to do is mess it up for anybody because they're fans, too. They want to watch whatever show they're doing and if it's not true to the property, nobody's going to like it--themselves included.