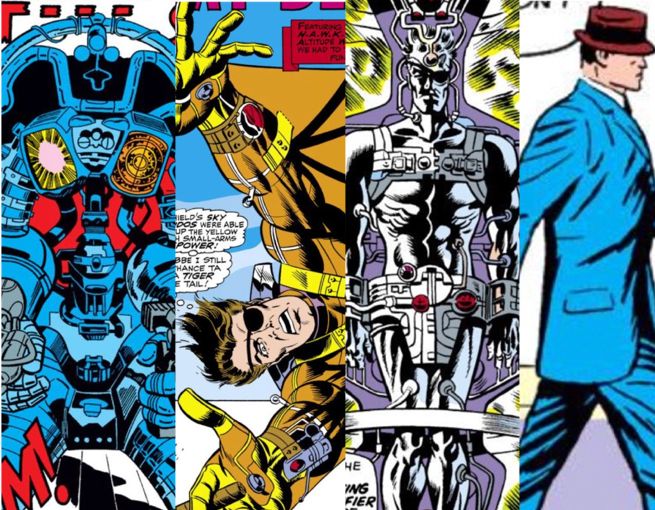 The first season of Agents of S.H.I.E.L.D. gave us Lola the flying car (don't touch Lola), guns capable of disintegrating evil Hydra agents with a single blast, and other wild and crazy contraptions and gizmos.

But readers of S.H.I.E.L.D. comics will note that the gadgets featured on the small screen only scratch the surface in terms of demonstrating the agency's ingenuity, innovation, and in a couple of instances, weirdness. This was especially true during Marvel's Silver Age in the 1960s when Stan Lee and Jack Kirby, and later Jim Steranko frequently used the pages of Strange Tales, which contained a monthly feature dedicated to the exploits of Nick Fury and S.H.I.E.L.D., to introduce technology that tested the limits of reader's imaginations.

Here are 10 of the coolest, most fun gadgets and gizmos that were featured in these Silver Age S.H.I.E.L.D. comics While some of these inventions were inevitably relegated to the "best left forgotten" pile, a number of them went on to become a part of S.H.I.E.L.D. and Marvel Comics lore. 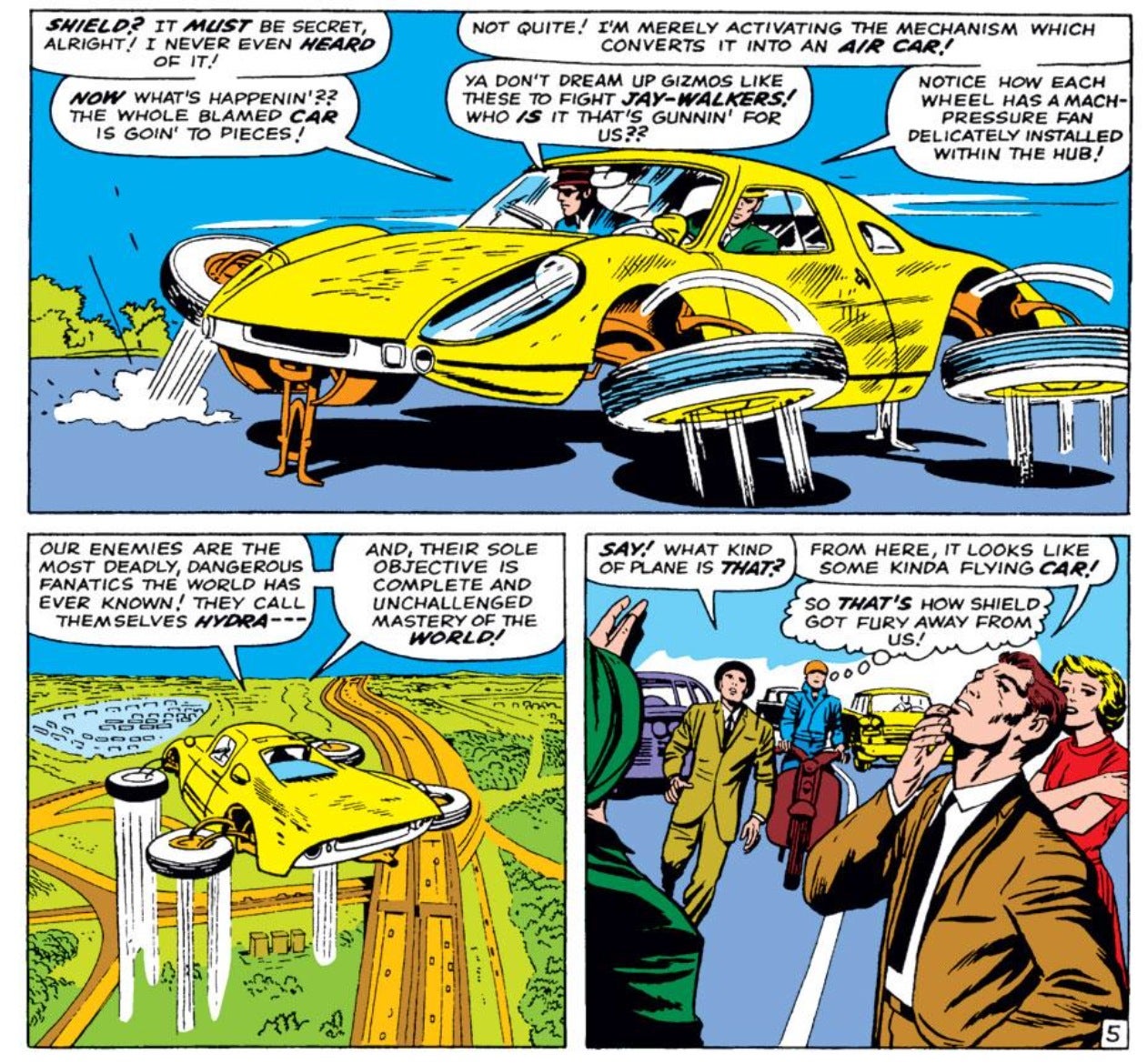 Stan Lee and Jack Kirby pulled out all the stops when they first introduced their readers to the world of S.H.I.E.L.D. in Strange Tales #135. Playing off the popularity of the recently released James Bond film franchise, Lee and Kirby made sure to pack this inaugural issue with plenty of gadgets and gizmos to make people "ooh" and "aah." Nick Fury's first car is both flame retardant (because it's made from the same metals and alloys used for the space capsule) and is able to flip its wheels up and convert into a flying vehicle. Remember, in the early 1960s, nothing was cooler than a flying automobile. In fact, few things are cooler nearly 50 years later. 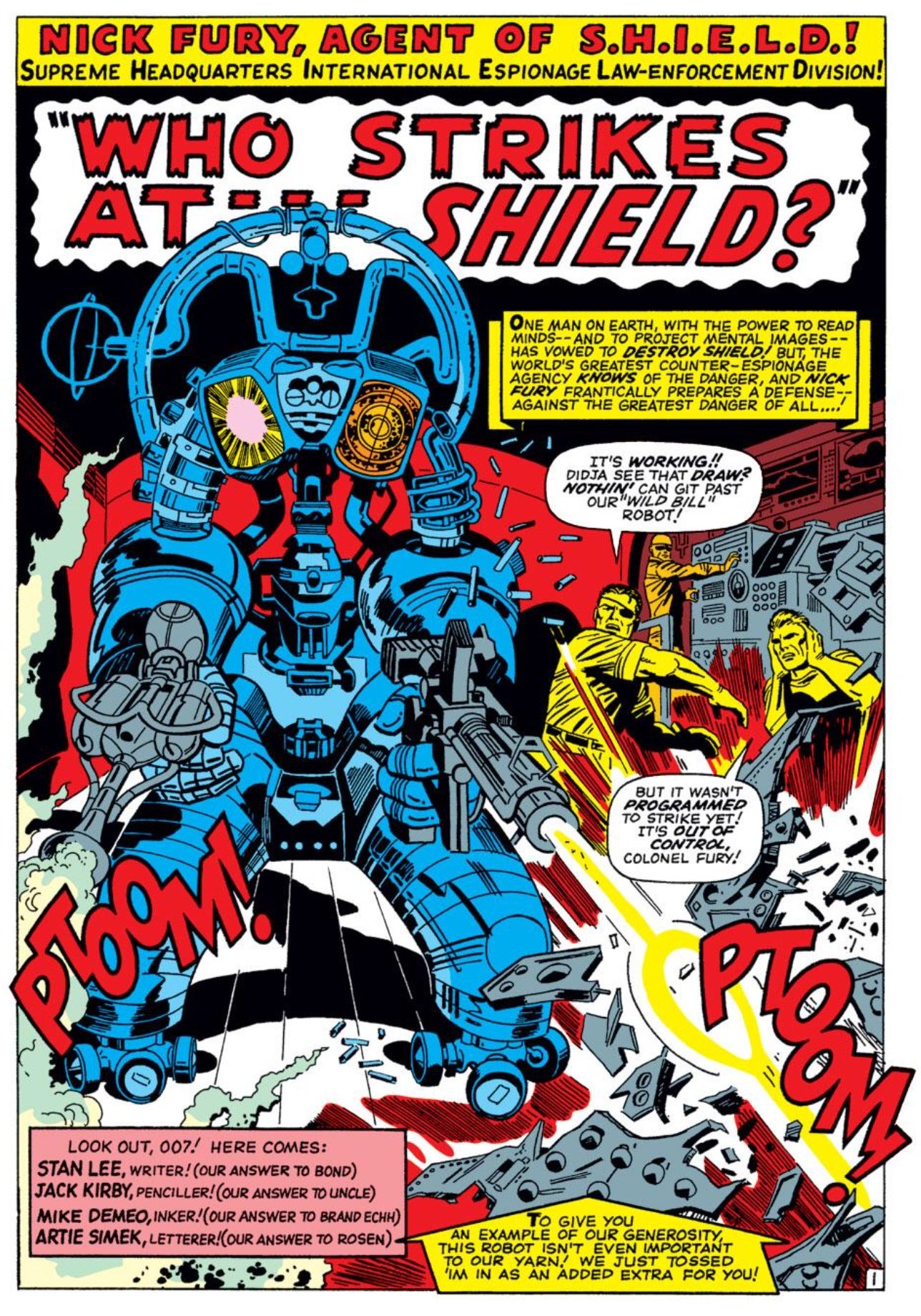 Not every piece of technology introduced in the early days of S.H.I.E.L.D. comics was practical, and in some instances, these new gadgets were downright nonsensical. Still, that didn't stop Lee and Kirby from showing off their extraordinary imaginations (and their sense of humor). On the opening splash page of Strange Tales #142, the reader sees a gargantuan walking robot firing a pair of very large guns. Fury refers to it as a Wild Bill Robot, though as the issue indicates at the bottom of the page, "this robot isn't even important to our yarn! We just tossed 'im in as an added extra for you!" Showoffs. 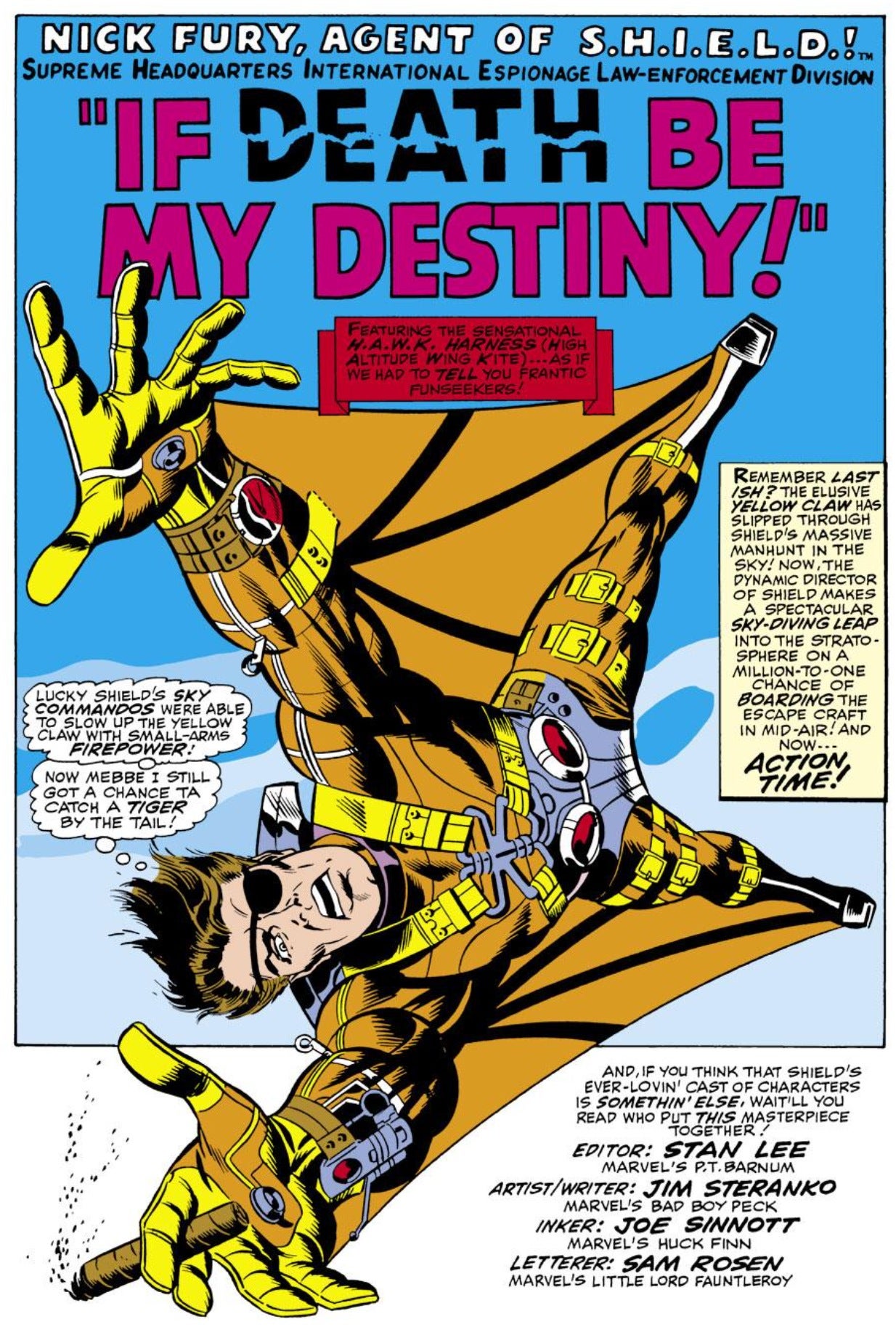 Not only is the H.A.W.K. Harness a great contraption, but it's a fantastic acronym – standing for high altitude wing kite (as if we had to tell you). First introduced in Strange Tales #166, these glider wings help S.H.I.E.L.D. agents in their air pursuits and to make drop zones. The wings remain unseen and folded in the harness until needed. In its debut issue, the H.A.W.K. harness aided Fury in making a death-defying leap onto the Yellow Claw's escape craft. They also provide Fury with the hands-free accessibility to enjoy a fine cigar. 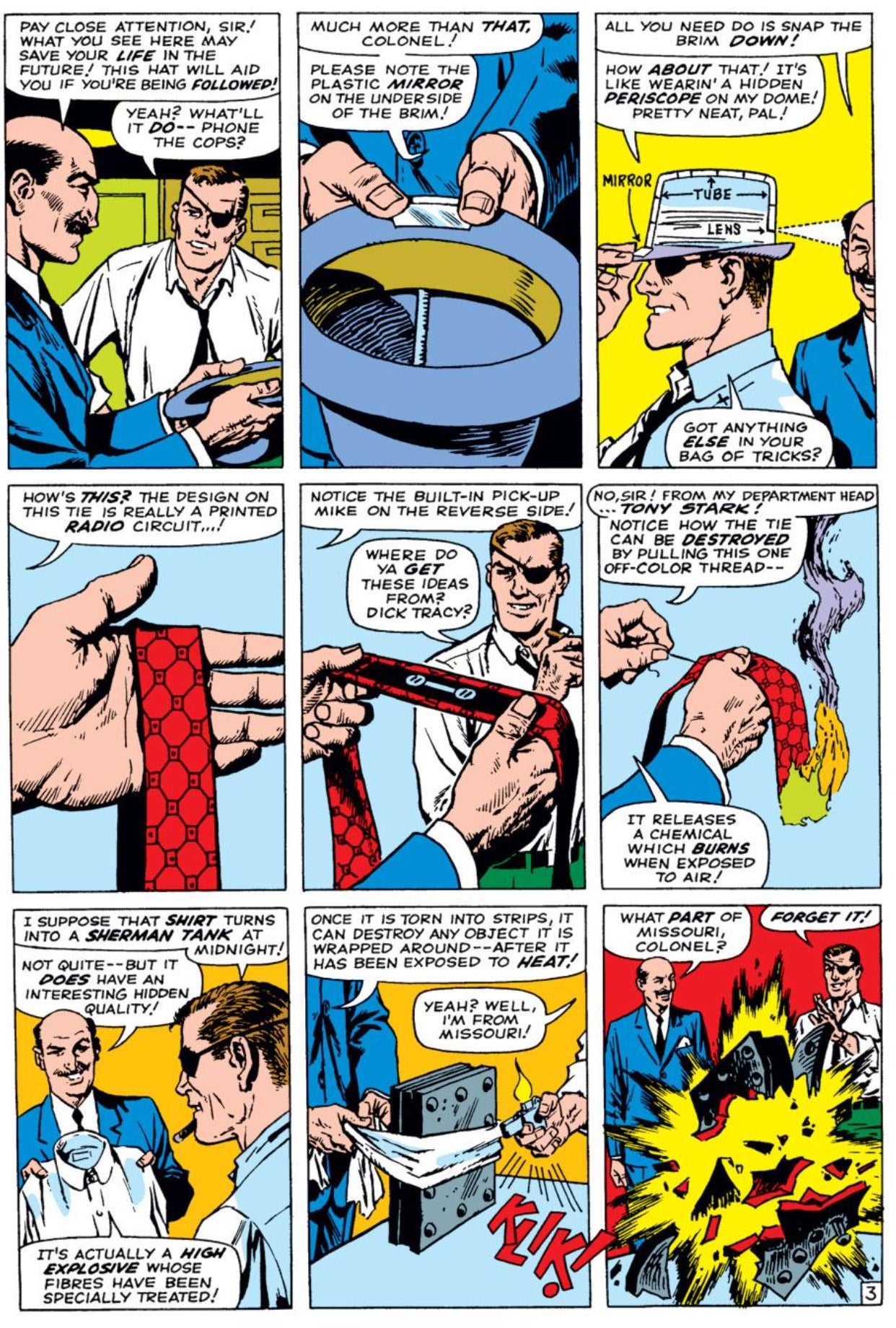 Well, no one can deny that Nick Fury is a man that dresses to kill (come on… you have to give me at least one pun in an article like this). While paying a visit to S.H.I.E.L.D.'s weapons design shop in Strange Tales #137, Fury gets a demonstration of three unique pieces of stylish apparel: a fedora that, when you flip the lid down, doubles as a periscope; a tie that releases a chemical that burns when exposed to air; and a dress shirt that also functions as an explosive when it's exposed to a heat source. In true Chekovian fashion, Fury successfully uses all of these devices to escape from Hydra custody in subsequent issues. 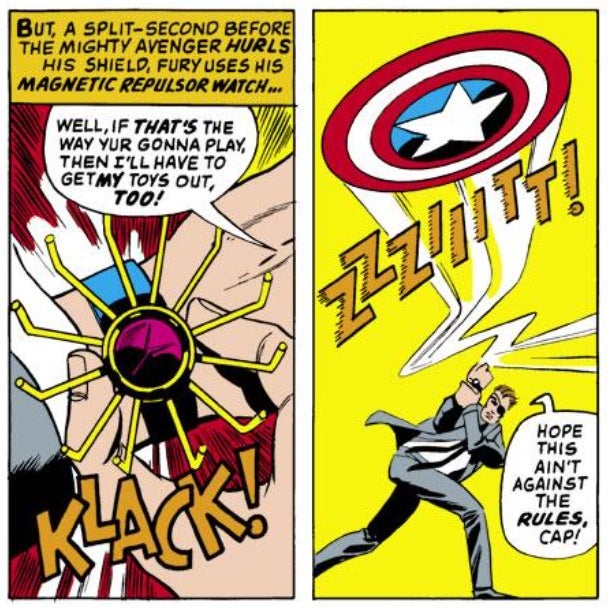 Fresh off of defeating Baron Von Strucker and Hydra in Strange Tales #156-158, Nick Fury returns to S.H.I.E.L.D. headquarters and immediately finds himself in the midst of a training session with the incomparable Captain America. While Cap's shield is considered one of the mightiest weapons in the Marvel Universe, it's apparently no match for the technological might of S.H.I.E.L.D. In Strange Tales #159, Fury busts out a magnetic repulsor watch to defends himself from Cap's red, white and blue projectile. The watch emits magnetic waves that successfully stop the shield in its tracks and returns it to sender. 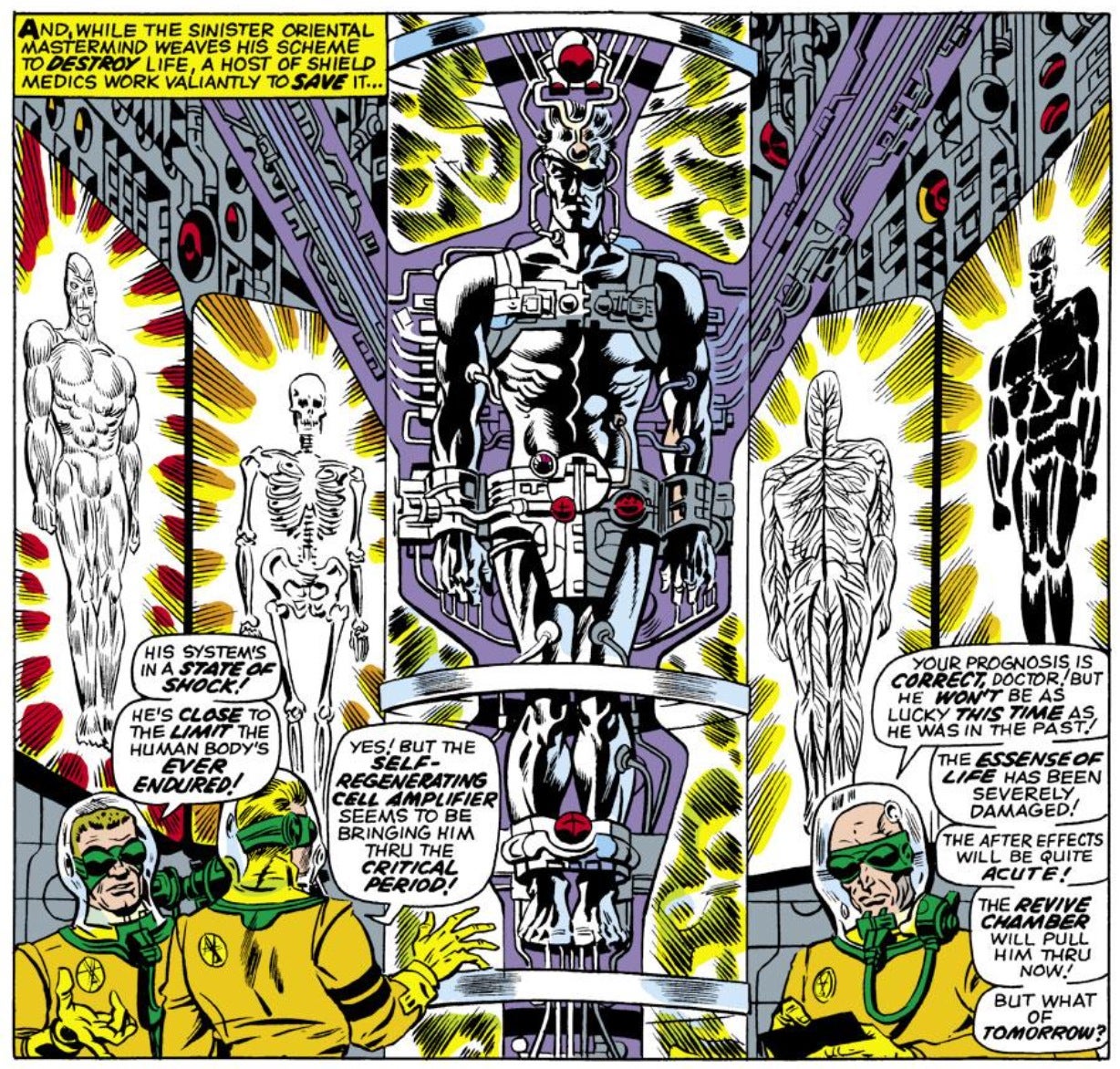 It looked like Nick Fury was toast when the evil Yellow Claw fired his deadly Ultimate Annihilator weapon at him on the final panels of Strange Tales #163, but he was able to survive his brush of death by teleporting away from the blast in the nick of time. However, the good Colonel was still pretty badly banged up, so the S.H.I.E.L.D. medical team busted out a contraption called the Revive Chamber. Once Fury is strapped into this machine, it helps regenerate his cellular structure, pulling his body out of its state of shock. Thanks to the machine, Fury survives, though he's warned by the doctor to stay clear of any future Ultimate Annihilator blasts for fear of blindness, blackouts or … ya know … death.

Also dubbed the ESP Machine, this S.H.I.E.L.D. device straps in three psychics  who then use their extraordinary mental powers to determine any imminent threats to the agency. In Strange Tales #160, Fury meets with Asian-American FBI agent Jimmy Woo to discuss the return of the villainous Yellow Claw,  a character that first tormented Woo in the mid-1950s series, Yellow Claw (which was published by Marvel predecessor Atlas Comics). While the Thought Communicator Beam Apparatus doesn't help Fury or S.H.I.E.L.D. fight Yellow Claw, it does provide an early warning signal before the entire system overloads from the imminent danger the supervillain poses. 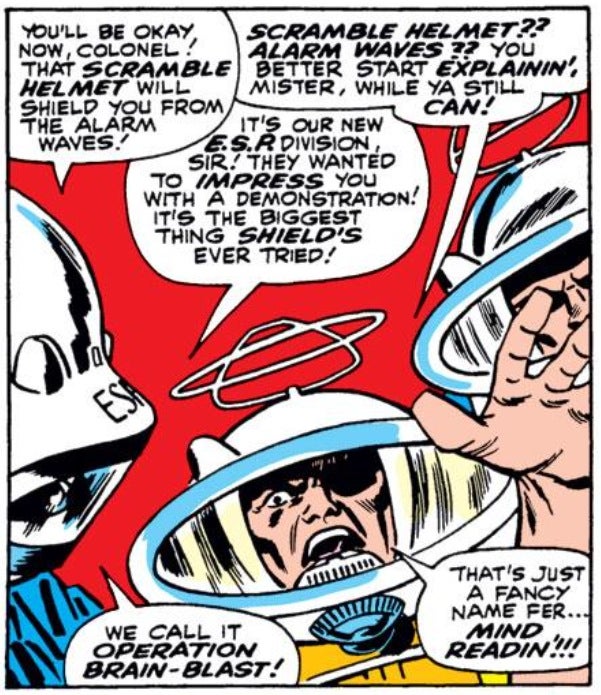 Stan Lee and Jack Kirby introduced S.H.I.E.L.D.'s ESP division in Strange Tales #141, and with it a number of far out gizmos and gadgets (including the aforementioned Thought Communicator Beam Apparatus). One of the innovations, a strange-looking, oval-shaped piece of headgear dubbed a scramble helmet, is developed to protect agents from potential mind-reading threats (like the supervillain, the Fixer). Fury gets a rude introduction to the helmet and the ESP squad when they psychically reach out to him in Strange Tales #141 to test their powers. Instead, they startle the Colonel when they ambush him with the protective (and hiedous-looking) headgear. 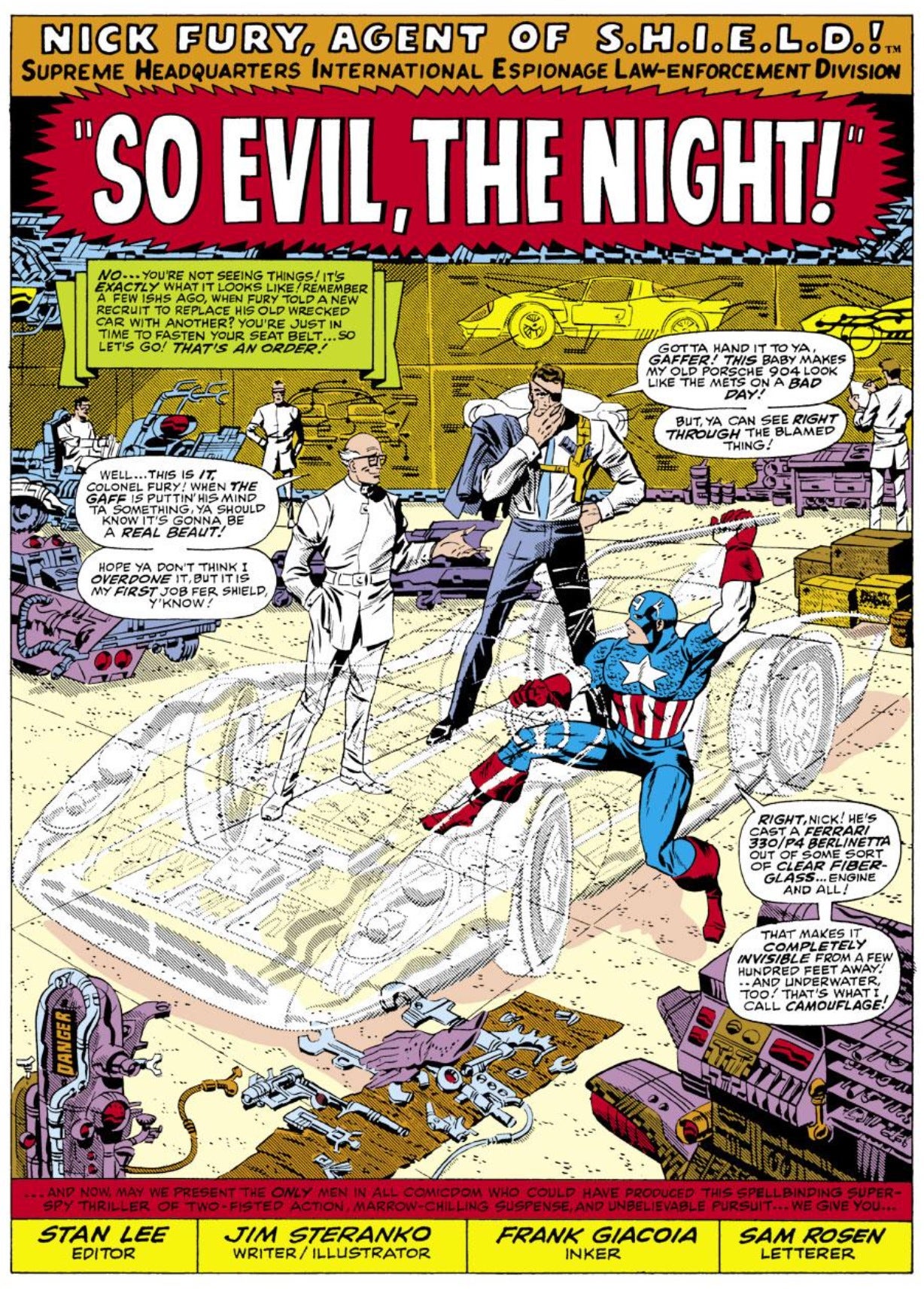 More than a year after Stan Lee and Jack Kirby introduced Nick Fury's flying car, Jim Steranko upgraded his model in Strange Tales #162. S.H.I.E.L.D.'s scientists utilize a clear fiber glass material to fabricate an entire Ferrari 330/P4 Berlinetta (aka, an extraordinarily awesome vehicle). Because of this unique substance, the tricked out car is invisible up to 100-feet away and underwater (for all those times somebody needs a flashy sports car in the deep blue sea). Additionally, the car's super-stealth is kicked up a notch when Fury dons an invisible tracksuit/helmet combo. Now that's driving in style.

LMD's and S.H.I.E.L.D. have been linked together going back to the espionage agency's earliest days. In the very first appearance of S.H.I.E.L.D. in Strange Tales #135, the comic opens with Nick Fury strapped into an "electric washtub" that is used to create a "master matrix" of the former Howlin' Commando's body. From there, four Fury replicas are produced and the LMD-era is born.

Over the years, a number of very popular Marvel characters have had LMD's made of themselves, including Steve Rogers, Thor, Bucky, Tony Stark and Sharon Carter. In the recently published Original Sins event, it was revealed that Fury's long-term friend Dum Dum Dugan actually died decades ago and was replaced with an LMD.

10 Cool Gadgets and Gizmos from the Silver Age of S.H.I.E.L.D. Comics