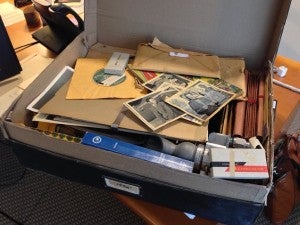 Yesterday, Brad Bird--director of The Incredibles, as well as the upcoming Walt Disney Studios tentpole epic 1952, about which almost nothing is known beyond the title and the fact that it stars George Clooney in a film written by Damon Lindelof--gave fans a look inside a box full of documents, photographs and other items that inform 1952.

The project, which has been speculated to be about developing Disneyland and at one point was connected to Star Wars Episode VII by fan and media conspiracy theories, remains as cryptic as ever, but the photographs of Walt Disney contained on top of the box appear to give a little credence to the theme park idea.

There's a vinyl record, some Technicolor film, a book called "Model Research" by Alex Roland. That book contains what is essentially an early history of the National Aeronautics and Space Administration (NASA), which was founded in 1958. That does indicate that this material will go beyond the simple scope of the year that the current working title of the film suggests. Early rumors that the film involves an unidentified flying object may also come into play there.

The box also contains a copy of Amazing Stories #28, a science fiction magazine that contains stories by H.G. Wells, Edward Elmer "Doc" Smith (creator of the Lensman and Skylark series) and Philip Francis Nowlan--whose story featured the first appearance of the character who would eventually come to be known as Buck Rogers. That book was published in 1928, so also doesn't seem to fit the 1952 date.

What, if anything, do these seemingly random items have in common? Maybe they'll tweet us a clue soon...!

Top Gun: Maverick Was Delayed Due to World Tour Plans Being Complicated

Who Will Hold WWE's Championships at the End of 2021?