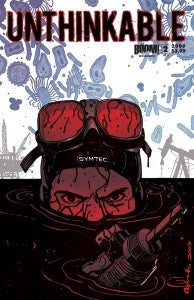 Howard Gordon, the former 24 showrunner who is developing a special miniseries version of the hit action-drama at Fox Television, has signed on along with producer Ben Queen (Cars 2) to bring BOOM! Studios's Unthinkable to television.

The Hollywood Reporter says the series will be an hour-long drama that "tells the story of the unlikely pairing of a by-the-book FBI agent and a washed-up screenwriters who team up to stop a plot to attack the United States that the screenwriter and others concocted at a government-sponsored think tank years earlier."

The comic, which was published by BOOM!, was created and written by Mark Sable and drawn by Julian Totino Tedesco--which mirrors what seems to be BOOM!'s philosophy of connecting to a writer and finding him an artist for his project, as opposed to takin pitches from writer/artist teams. That's apparently why Steven Grant got a "created by" credit on 2 Guns and the lion's share of the film revenue. BOOM! CEO Ross Richie will executive produce.