This week, Sam Wilson, aka, Falcon, headlines his very own ongoing comic book series for the first time, when the All New Captain America #1 by Rick Remender and Stuart Immonen.

However, this is not the first time Falcon has appeared in the title of a series. During the early 1970s, Captain America was renamed Captain America and Falcon at issue #134, and ran for 78 issues with both heroes co-headlining. Over the course of this run, Stan Lee wrote his final Captain America issues, while industry icon Steve Englehart took over, before eventually giving way to the return of Jack Kirby as a writer, artist and editor. In other words, the Cap and Falcon years were very eventful for both heroes and are worth celebrating.

Here are the five very best storylines as featured during the 78-issue run of Captain America and Falcon: 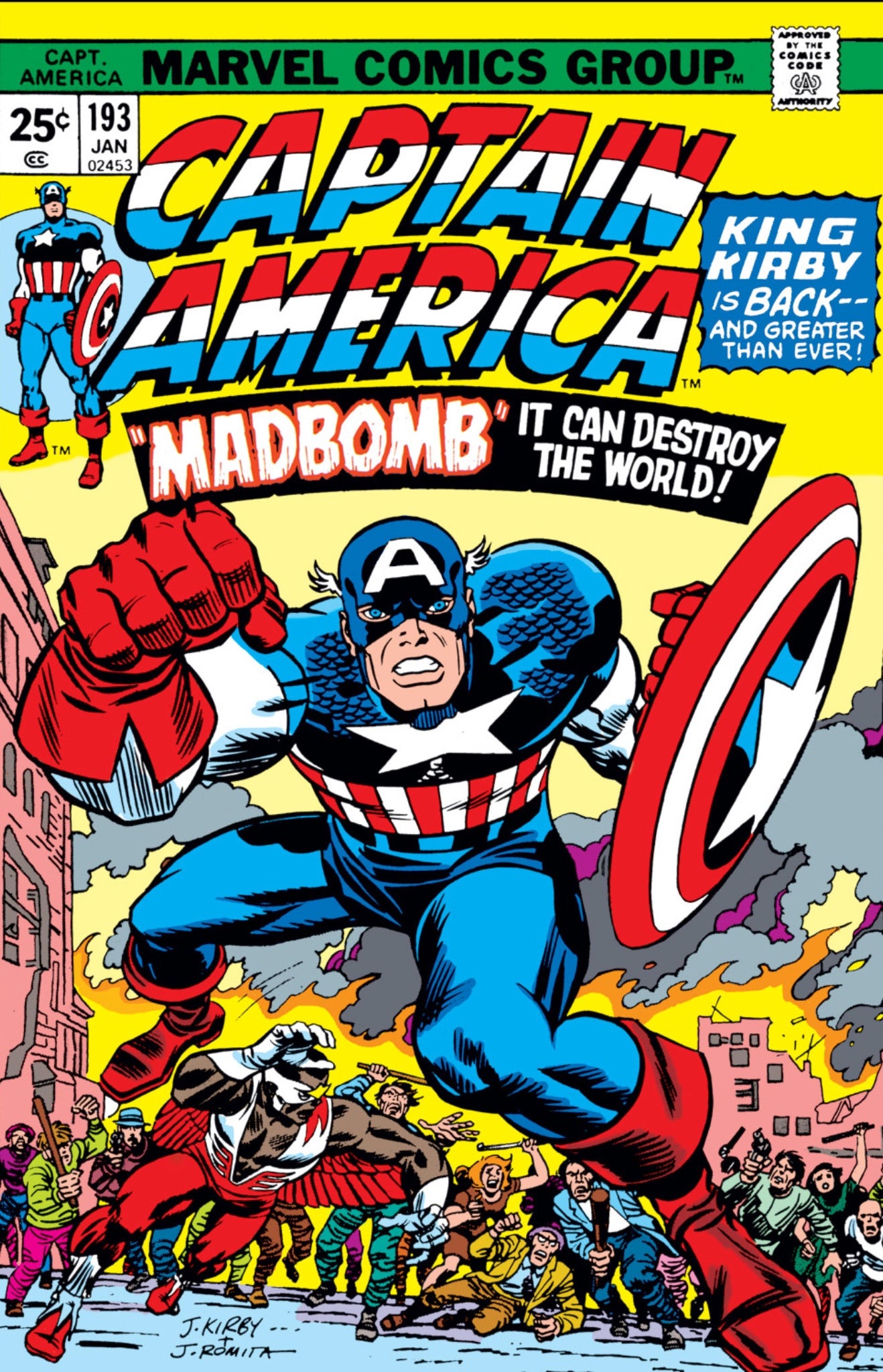 In the mid-1970s, Marvel was able to woo Jack "King" Kirby back from the "Distinguished Competition" by handing him the keys to the character the artist first created back during World War II. Kirby, scripted, illustrated and edited Captain America and Falcon for more than 20 issues, his first arc being "Madbomb."

Kirby definitely put his own unique stamp on the book during his run. Keep in mind, this run followed the King's far out Fourth World years with DC, which introduced such cosmic creations as Darkseid and the New Gods. After years of Captain America and Falcon being quite grounded and street level, with a specific emphasis on racial relations, Kirby introduced a group of out of time conspirators who wanted to set off a sonic bomb that would drive the entire world crazy with irrational anger. In retrospect, Kirby's 70s campaign with Cap and Falcon might read a bit strangely, but his first arc in particular had some great action and drama. Plus, seeing Kirby illustrate Captain Americaagain is worth the price of admission by itself. 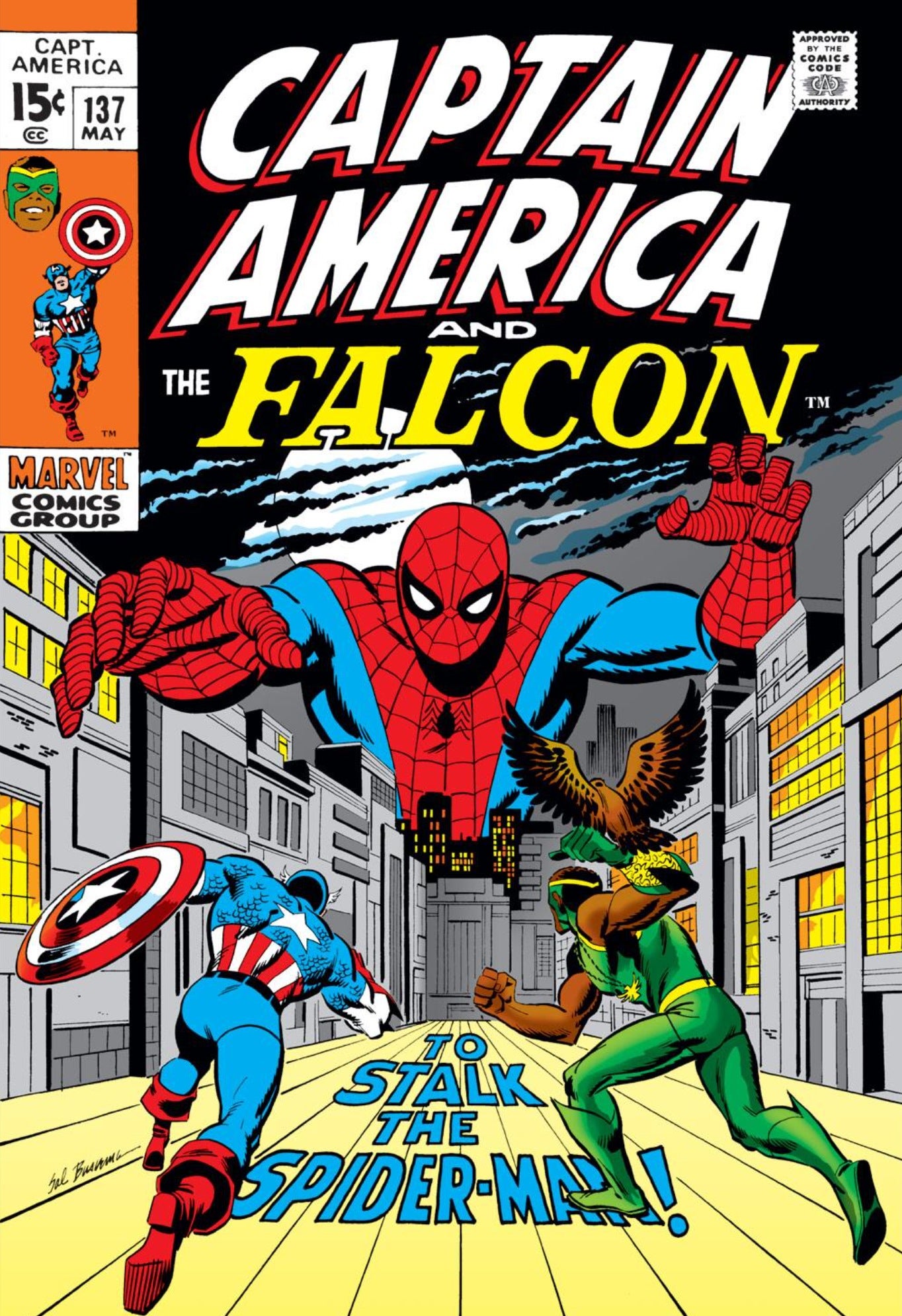 An ongoing theme once Falcon began his tenure co-headlining a book with Captain America was his insecurity about his ability to measure up to his iconic partner. In this 1971 story from Stan Lee and Gene Colan, Falcon decides the best way to prove his worth is to take down the masked vigilante Spider-Man. Even outside the confines of his own book, Spidey could just never catch a break when it came to his public perception. However, Wilson is unsuccessful in his attempts to capture Spider-Man, and eventually finds himself being held captive by the criminal, Stone Face.

Despite the hostile introduction, Spider-Man feels deeply responsible for Falcon's predicament, and sets out to rescue him. The storyline concludes with Cap, Falcon and Spider-Man all working together to defeat Stone Face – enemies becomes friends, and everyone is all the better for it.

It's not the most historically significant story, but it does mark one of the very first Spider-Man/Captain America team-ups, and it's definitely the first time Spidey and Falcon collaborated. And considering how Spider-Man and Falcon both had to deal with being perceived as second-class heroes, this story demonstrates some of the similarities the two characters share. 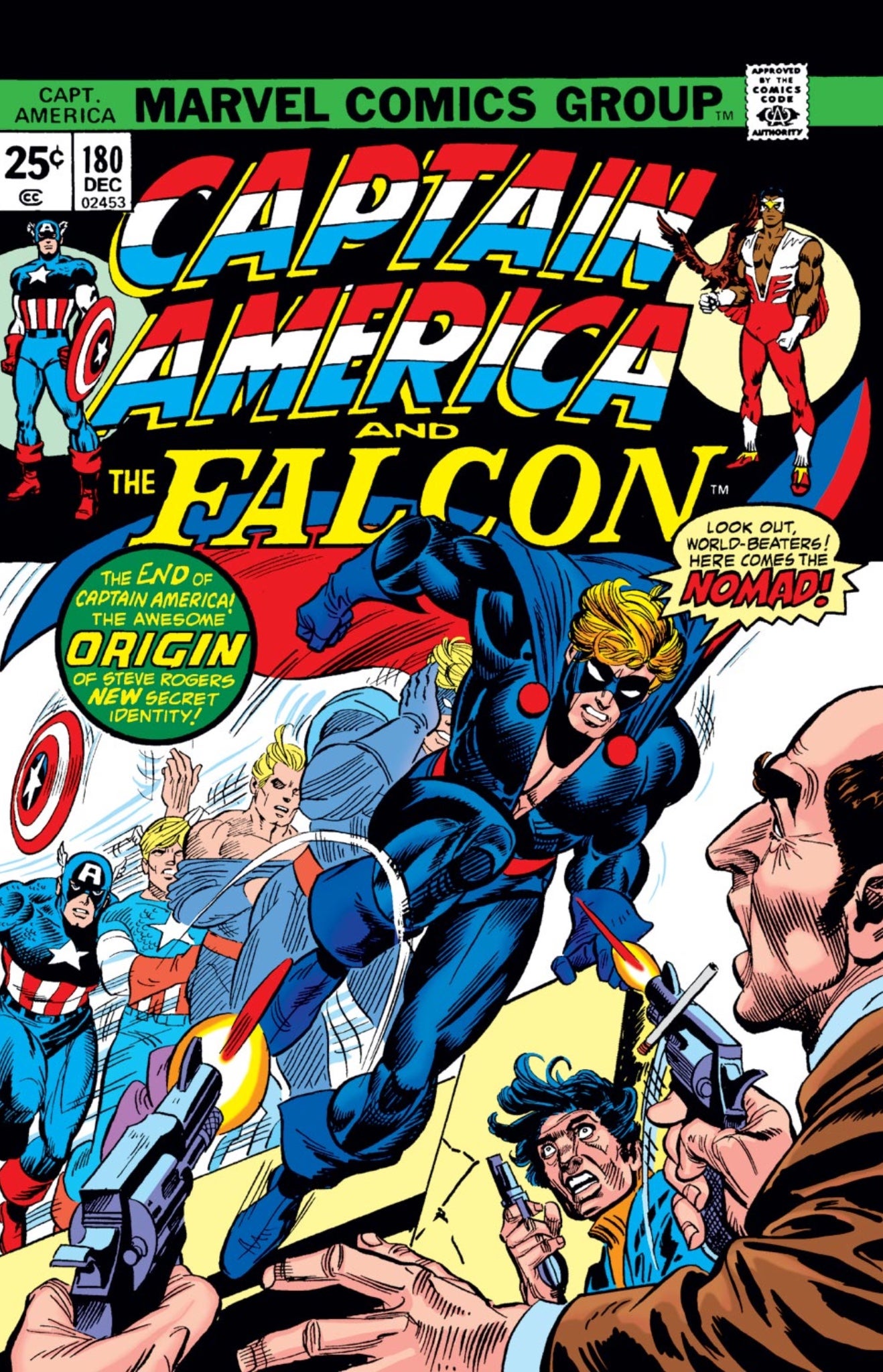 Written by Steve Englehart, in this story, Steve Rogers turns his back on his heroic alter ego and "retires" as Captain America, after he was betrayed by his country during the "Secret Empire" arc (more on that in a bit). However, it's only a matter of time before Rogers gets that itch to do good again. After being goaded by a poorly disguised Hawkeye as the "Golden Archer," Steve takes on the secret identity of Nomad, a hero "without a country."

Meanwhile, Falcon is finding he's having a hard time being a hero on his own. A litany of ordinary Joes audition to be the new Captain America alongside Falcon, with a blue collar guy named Roscoe eventually taking over. However, what was initially being played for yuks turns tragic when the Red Skull wants a piece of the REAL Captain America. Poor, poor Roscoe.

By the time Rogers comes back as Cap, his hatred for the Skull is palatable. However, as an added wrinkle, the final issue of this arc reveals the secret origin of Falcon - that he was once a street urchin named Snap Wilson before the power of the Cosmic Cube transformed him into the more naïve, altruistic Sam Wilson. Future creators haven't always embraced Englehart's Falcon retcon, though it was a vital part of the Christopher Priest-penned Captain America and Falcon series from the 2000s. 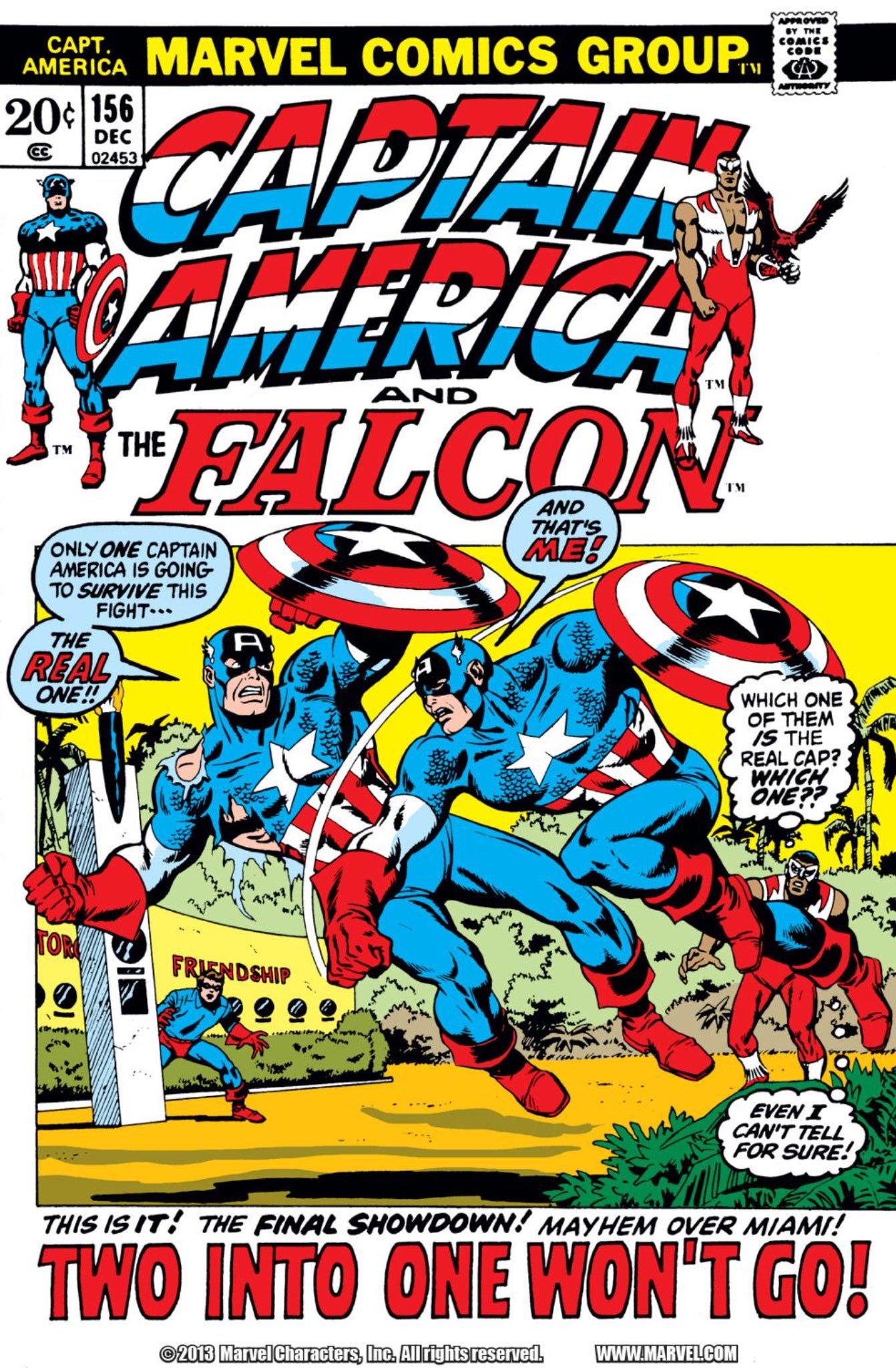 While Captain America: The Winter Soldier was undoubtedly inspired by the Ed Brubaker storyline of the same name, the film's high level of political intrigue and paranoid was certainly influenced in part by Englehart's excellent run on Captain America and Falcon in the 1970s.

Case in point, this storyline introduces a second Captain America, William Burnside, a man who idolized the original Cap so much, he volunteered for a second Super Soldier program during the Korean War in the 1950s. However, after the war ended, the country no longer had any use for Burnside-Cap, driving the man insane. When Burnside reappears in the present day, he's a hateful man who doesn't understand why Cap is going around with an African American like Falcon. That leads to an ugly confrontation between Cap, Falcon and Sharon Carter, and Burnside and his Bucky-lookalike sidekick Jack Monroe. Meanwhile, Englehart doesn't hide the fact that Burnside's paranoia and nastiness was triggered by how much his country neglected and disposed of him. 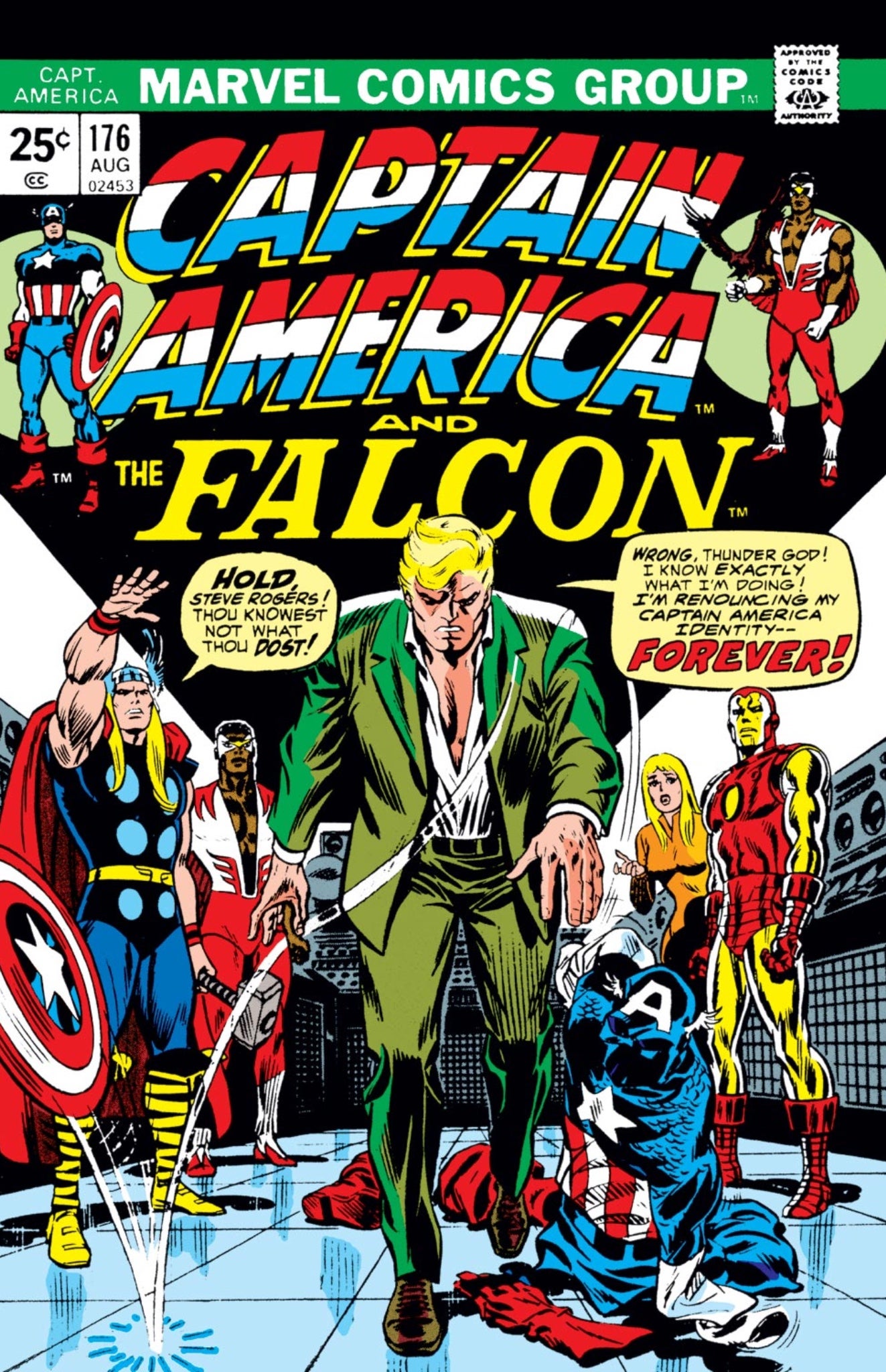 Arguably the most famous Captain America and Falcon story from the 1970s, Englehart crafts a haunting political allegory that was very heavily based on the very real fall of Richard Nixon's presidency.

But beyond how the storyline was ripped from the national headlines, "Secret Empire" is just a phenomenal tale about how Captain America's faith in the establishment he was created to protect, was destroyed. Cap tracks a conspiracy all the way to the highest office in the land, and then after making that discovery, witnesses the POTUS commit suicide. Horrifying stuff.

Falcon gets plenty to do in this storyline as well. Tired of being just a guy with a bird when fighting alongside Cap, Falcon goes to Black Panther and gets a brand new suit of retractable wings made, providing the character with a little more pizzazz.