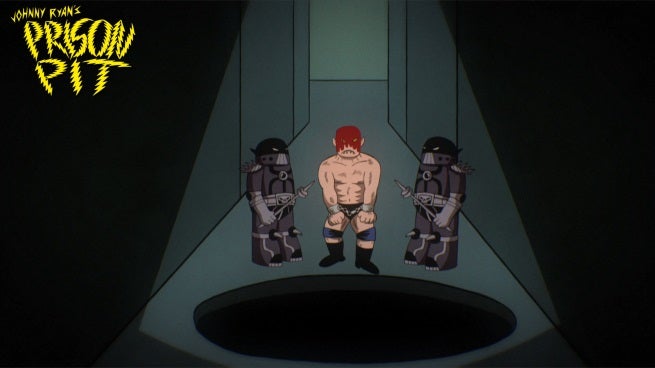 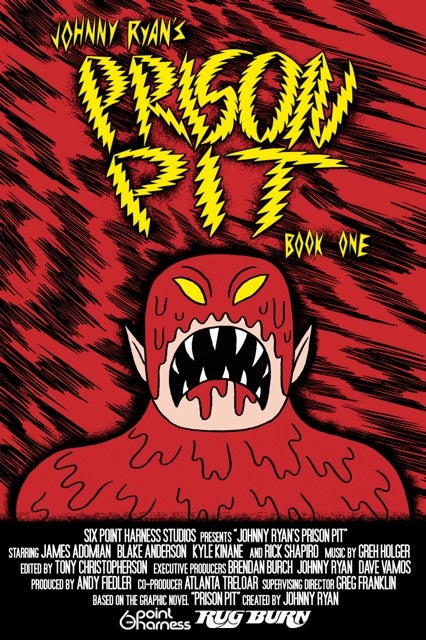 Johnny Ryan's Prison Pit graphic novels, published by Fantagraphics, have become a cult sensation, particularly among fans of underground comics. Formed from a mix of Dungeons & Dragons, the theatricality of professional wrestling, and the hyper-violence of games like Grand Theft Auto, along with the grungey weirdness and countercultural edge that is hard to find outside of alternative comics, the series has struck a chord with those looking for something very different from their comics than the usual superhero fare.

At the 2013 Comic-Con International: San Diego, it was announced that Johnny Ryan's unique authorial vision would be adapted into animation by 6 Point Harness, the animation studio who recently produced the animated segments of Fox's Cosmos: A Spacetime Odyssey, with a voice cast of popular comedians like James Adomian, Kyle Kinane, Blake Anderson, and Rick Shapiro.

The first two chapters of Prison Pit: Book One have already been released on the Rug Burn YouTube channel, with Chapter 3 set to arrive on Thursday. 6 Point Harness co-founder Greg Franklin took some time to talk to us about taking his studio from science non-fiction to alt comics, adapting Ryan's story, and bringing it to life with such talented voice actors.

So how did this project come about? Did Johnny Ryan approach you, or do you approach him?

We definitely approached him. My partner, Brendan, and I at 6 Point Harness, I've known him known him for years. We have a mutual friend who made a script for Angry Youth Comix, which was Ryan's earlier humor title, and it was so crazy that we just didn't feel like we could make it the way we wanted to. It was like, where are you going to show such a thing?

Now, there's a lot of audience, and we really just loved Prison Pit right off the bat. It's such an amazing comic book. It's so boiled down to a crazy Road Warrior, plus the violence of an Italian horror movie. It's such an amazingly original thing that we thought that we had to make it. Son we approached Johnny, and I talked to him, and he was on board, and we just went from there. 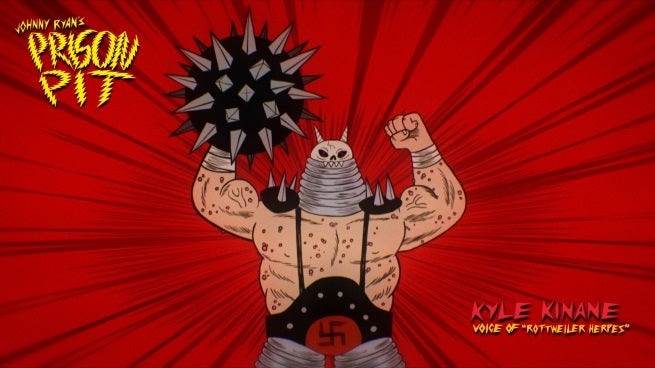 Before you took on Prison Pit, you were working on Cosmos for Fox, which is kind of this refined science show. Is there kind of a tonal whiplash for you and your team, going from that to working on an adaptation of underground comic whose main character is named Cannibal F***face?

Cosmos is very refined, very prestigious, very much its heart is in the right place, very much good for society. Which is a real contrast to Prison Pit, which is probably not great for society, but is just entertaining as hell. It's great, we run the gamut over here at 6 Point.

How involved has Johnny Ryan been in the adaptation process?

He's had approval over pretty much everything. We did some test animation that we released at Comic-Con last year, and we made an animatic that was very faithful to the comic. That was always our goal, was to basically adapt it, but there's a lot of stuff that changes. It's a whole new thing now.

One of the things that was great was that, when Johnny saw it, he was like, "Yeah, this needs to work as a film." With the color palette that we have, one of his great notes was always "make it more disgusting, make it more violent, add chunks," thing like that. It's just great that we could really take advantage of the medium like that.

You mentioned the color palette. The comic was in black and white, so color is an aspect contributed almost entirely by you and your team. What was the creative process when you were figuring that out?

The one thing we did have to go off of was that there's a limited amount of color on the covers of all the editions of Prison Pit. We took those as a starting point, and then built out the world to look as desolate, and acrid, and inhospitable as possible, while still making it nice to look at. We added a lot of things that we felt would fit the sort of filmic aesthetic of it, if it were to follow a logical extension. So that kind of went to a little bit of grindhouse style, like film scratches and grain, like it's a snuff movie or something that's been unearthed. A couple of things like a little projector gate wobble, all the film grain, and very subtle color separation. We showed Johnny a test of that, and he loved it, so we were pretty stoked. 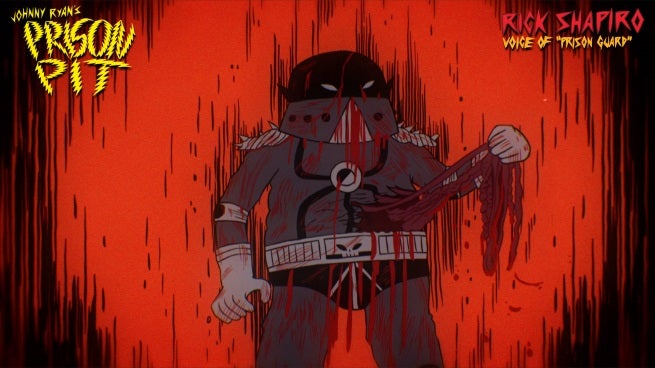 The other major addition that you guys had to supply creatively was the sound design. I notice it has almost an art house horror feel to it. Was the creative process for coming up with the sounds for the animation?

A lot of that comes from the composer, who is named Greh Holger, who is also known as Hive Mind, which Johnny's been a fan of and introduced us to as something that would be copacetic, or a likeminded soundtrack to Prison Pit. And we did kind of ask around to some producer and ask, "hey, can you like this?" Eventually, it was just like, after looking around, let's just ask him. So we just went to the source, and he was a huge fan of Johnny's and he was totally onboard. We all just met and it was just a perfect fit.

He's an old synth freak, so he has all these vintage synthesizers that make this sound that kind of makes you nauseous, some kind of weird frequency that he just kind of dials into. The same kind of dread, like you mentioned that it's like a giallo kind of soundtrack.

Also, our mixer, John, is great. He rips up lettuce for sounds. When we recorded the actors - like James Adomian, whose amazing, Kyle Kinane, Rick Shapiro – we had them eating putting and stuff, so it would sound like blood was boiling in their throats, so they could deliver their lines. Our booth has never been the same since.

Is it almost haunted now, at this point?

We clean up most of it, but we need to replace some equipment because there's pudding in there that you cannot get out. 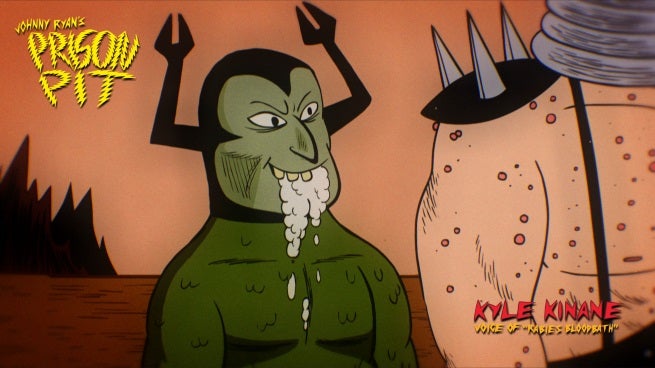 Speaking of the voice actors, were they familiar with the source material when you approached? Did, for example, Kyle Kinane known that he was going to be playing, essentially, a Nazi Dungeons & Dragons monster?

No, Kyle is not a comic book guy. He's actually way more into animation, like classic Looney Tunes and stuff like that. He was never a comic book guy, but he's down with anything that's cool. When we showed him Prison Pit and asked him to do it, he was like, "oh, yeah, great."

And, you know, it's hard to say, with Rick Shapiro, what he actually knows about. He definitely knows about stuff we don't on a metaphysical level, because he's insane. James was familiar with it, and James, Johnny, and I all share a crazy love of old wrestling, which was a huge influence on how the lines were deliver, and the writing of the dialog is kind of like the old style wrestling banter. So he was aware of it when we were doing it, and everyone go along pretty great around that.

Having seen the finished work, you mentioned that you had to change certain things in adapting for the source material. To me, it seemed pretty spot on. What were some of the tweaks and changes that you made?

A lot of it is subtle things, like Johnny can have a square composition, full page, and his ratio always change where we have that 16:9 space that we've got to fill. So there's a little bit of composition, and then, when you have that, why not go for a shot.

The changes are subtle, but probably the biggest change that we made, we asked Johnny about it and he was cool because he wasn't really happy with it, was the giant fight when C.F. is dropped into the pit and he fights with the prison guard all along the way. In the black and white comic, he had to kind of draw this halo around everything, because it was just dark. He really didn't want to have to do that, and we were going to have to change the coloring anyway, so we tought, the show's starting, why don't we this fight like a crazily animated, Peter Chung-like, with camera moves and characters flying all around and getting really brutal. Why not take advantage of it? It turned out great. One of the funniest things that we've ever animated, it's so great.

Do you have anything left that you'd like to say to fans?

Keep seeking out the unusual and the offensive. Thanks for supporting Prison Pit, and we hope to make a lot longer version of this in the future. Thanks for the support, and hopefully we get to long form all of the books, a feature film, something like that going. So thanks everybody.