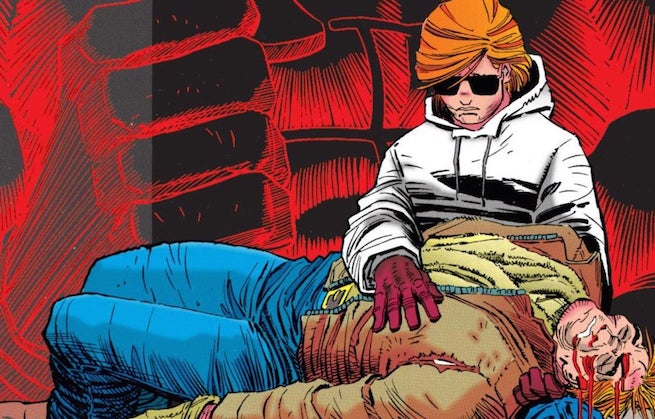 You've (hopefully) watched Daredevil on Netflix by now, and likely find yourself curious about where the character's tragic origin and dark sensibilities came from. For answers, look no further than the five-part miniseries, Daredevil: The Man Without Fear, written by legendary Daredevil scribe Frank Miller and illustrated John Romita Jr. and Al Williamson.

In the latest installment of 90s Nirvana, ComicBook.com's recurring feature that examines, celebrates and critiques famous storylines and comics from the 90s, we break down the Man Without Fear. Some critics and fans have declared Man Without Fear the definitive origin story for Hornhead, but 90s Nirvana will determine whether or not the mini is a neo-noir work of art, or just an overly decompressed origin rehash that ignores all of Daredevil's bright and swashbuckling characteristics. 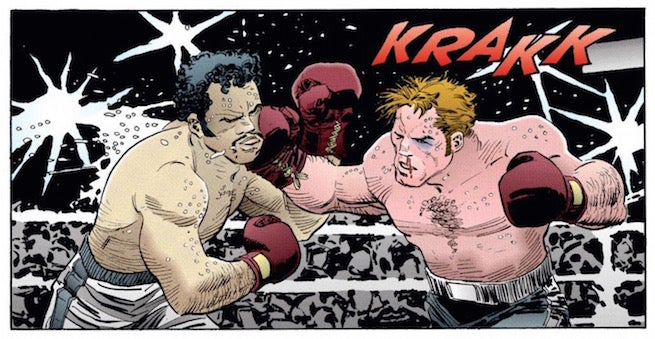 1. The Ballad of Battlin' Jack

In Daredevil's original origin story, Matt's father, down-on-his-luck prize fighter Jack Murdock, is depicted more as a plot device than a sympathetic character. As such, the reader never gets a compelling argument on how Jack's death influenced Matt's path in becoming the vigilante hero known as Daredevil. By slowing the story's pace down, Miller uses Jack's tragic circumstances – a good guy who finds himself in a really bad situation – to establish pathos for the character. Jack is bullied by a mobster and his henchmen into becoming an enforcer in Hell's Kitchen. But when he metaphorically spits in the face of his abusers by refusing to throw his championship fight, Jack is resigned to his violent fate because he accepts he can't beat a broken system. With his father as cautionary tale, Matt fights back against bullies and becomes a lawyer to fix the system. It's an explicit choice by Miller that subsequently connects all of Daredevil's characterization dots from past to present. 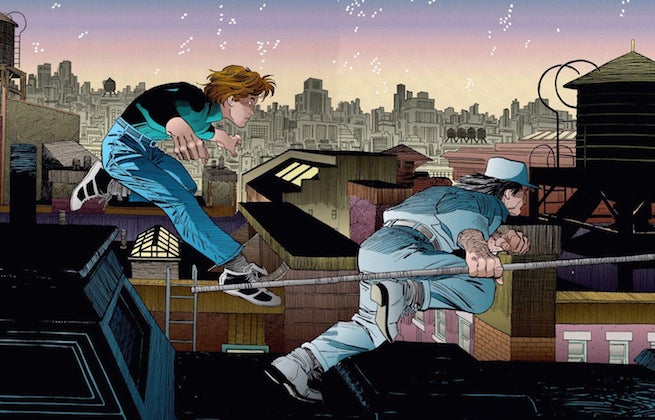 Man Without Fear understands that even with a gift like "radar sense," Matt would still need training and practice to become an acrobatic crime fighter. So, Miller places Stick – a character he first created during his run in the 70s – in Matt's origin as the tough loving sage who helps the young man harness his new abilities and emerge as an expertly-trained hero. Similar to Jack Murdock's characterization, the original Daredevil stories offered no context behind Matt's prowess as an amazing fighter. Man Without Fear's decompressed approach provides clarity and moves past expecting the reader to suspend disbelief. 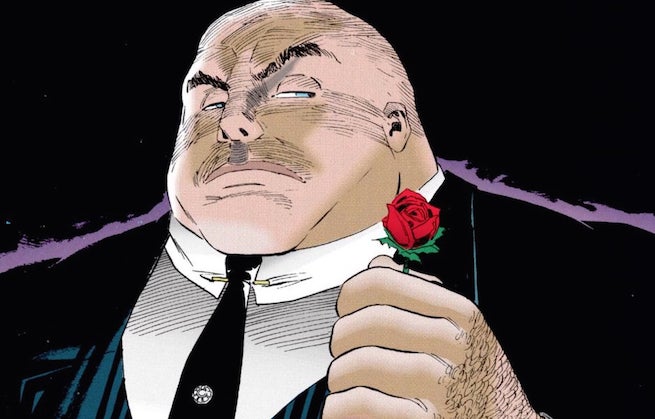 Shh… don't say his name. Wilson Fisk wasn't even a creation when Daredevil debuted in 1964, but it still took more than a decade before Miller had the bright idea of making Kingpin and Hornhead adversaries. As it does with Stick, Man Without Fear places Fisk in Daredevil's early continuity. But he keeps the character in the shadows, which would help explain how the nemeses didn't physically acknowledge each other until years later. However, the reader is clearly meant to exit this story with the understanding that without Fisk's machinations, Matt may have never have had a reason to become a costumed hero. This creative choice makes Fisk even more essential to Daredevil's existence. 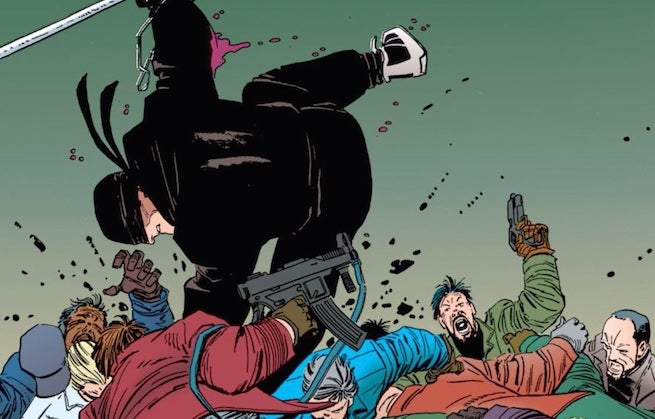 JRJR has called Man Without Fear his favorite project in comics, and it's easy to see why. Romita brings a level of raw, kinetic energy to so many splash pages and panels throughout the comic. Though from a production standpoint, the comic might be JRJR's most challenging work ever. The story reportedly evolved from a 64-page graphic novel into a five-part mini, which meant JR had to create new breakdowns and transition pages a few times over while the series was was in development. 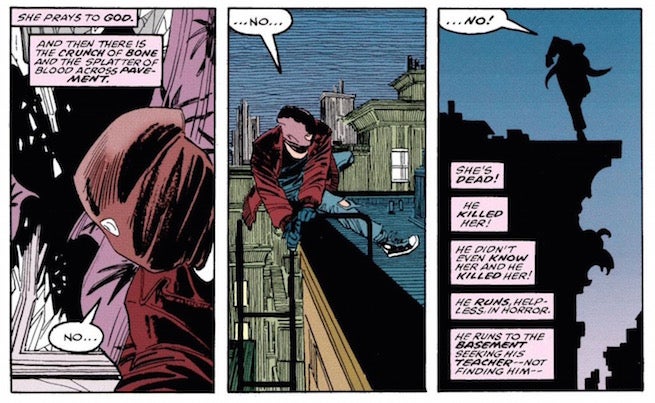 1. A Hero That Kills

Not every superhero can be a saint, but Man Without Fear introduces a somewhat uncomfortable plot detail when Matt inadvertently kills a woman by knocking her out a window. The moment is meant to demonstrate Matt's immaturity during his early vigilante days, but having him murder doesn't add anything to our understanding of the character's motivations. The series revisits the moment to explain Matt's gun-shyness in combat, but Miller could have achieved the same goal through less violent means. The fact that the victim is an unnamed woman at a brothel – signifying her expendability – makes the moment more of an ill-fitting plot device than an actual character-building experience.

Miller pushes the envelope a fair bit with Elektra's characterization. Elektra is introduced as an uncontrollable wild child that bewitches Matt for all the wrong reasons. That's fine, but things get squidgy when the creators over-sexualize the character. When she first meets Matt, Elektra leaves a trail of her clothing (all the way down to her panties, indicating that she's naked), in the woods for him to follow, and in a later scene, she strips down to what basically looks like a swimsuit/singlet to fight (and murder) some would-be attackers. Similar to Matt killing someone, this characterization doesn't really add a deeper understanding of Elektra. And when you consider how many of Miller's future stories portrayed women in similar fashion, it's difficult to gloss over this level of objectification.

Man Without Fear has a clear agenda in that it embellishes characters and plot elements that Miller introduced during his inaugural run on Daredevil. Unfortunately, such an approach neglects things that preceded Miller's time with the character. We see this primarliy in the characterization of Matt andFoggy Nelson's friendship. Law partners and best friends, the decompressed mini could have spent some serious time building up the characters, but outside of one scene, where Matt tortures a college kid who was bullying Foggy, the details of their brotherhood are left to the imagination. Compare that to Mark Waid's current run on Daredevil, which really explores Matt and Foggy's dynamic, and it makes Man Without Fear even more of a missed opportunity.

While this section of 90s Nirvana is typically reserved for silly, goofy moments (like Batman ordering a pizza or Peter David inserting his ashes into a story), Man Without Fear plays it very straight throughout. Obviously, such a serious approach adds a level of gravitas to the story, but the series is unquestionably light on laughs.

Man Without Fear is truly one of the great Daredevil stories, but it's interesting to look at this series more than 20 years later and notice some of the Frank Miller-isms that would later define the creator for better or worse. As such, some of the character choices and overall lack of emotional warmth knocks the final score down a notch. But, Man Without Fear is an unquestionable achievement. It's plainly clear why Marvel Studios referenced this story so heavily for Daredevil's television debut.

Who Dies in Stranger Things 4 Part 2?