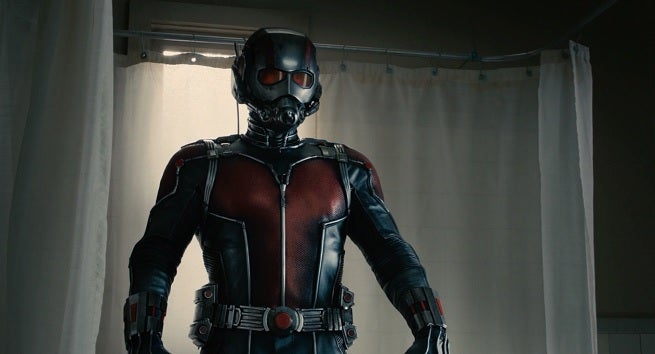 Yesterday was a big day for Ant-Man. But despite the splash made by the first official trailer and poster, the biggest update might have been in the film's deeper credits.

In their official description Ant-Man, Disney and Marvel Studios announced Adam McKay and star Paul Rudd as the film's official screenplay writers. While Rudd mentioned last year that he and McKay were extensively reworking Edgar Wright and Joe Cornish's original script, it looks like they replaced it an entirely different treatment to Edgar Wright's Ant-Man story.

This diminishes Wright's influence on the film even further. Wright was initially hired by Marvel to develop, pen, and direct the Ant-Man film. He was just about to roll cameras last year, but dropped out at the eleventh hour over "creative differences." Marvel then hired Peyton Reed as the replacement director, and Adam McKay to rework the script. McKay, who's credits include Anchorman and Step Brothers, then brought Rudd along to rework Wright's screenplay with him.

But it looks like their retooling turned into a complete do-over. It supports what's been said throughout the film's production. McKay told Collider late last year that he and Rudd made exhaustive changes to Wright's treatment, saying that their version was "a little bigger, a little more aggressive, and funnier in places." Wright still retains official credit for the film's story however, along with a producer credit. It will be interesting to see if any of Wright's distinct fingerprints will appear on Ant-Man, or if the film's new creative team scrubbed them clean.

Demon Slayer Calls Back to Rengoku With Tengen's Big Confession

PlayStation Plus Slammed by Subscribers as Sony Hits "New Low"