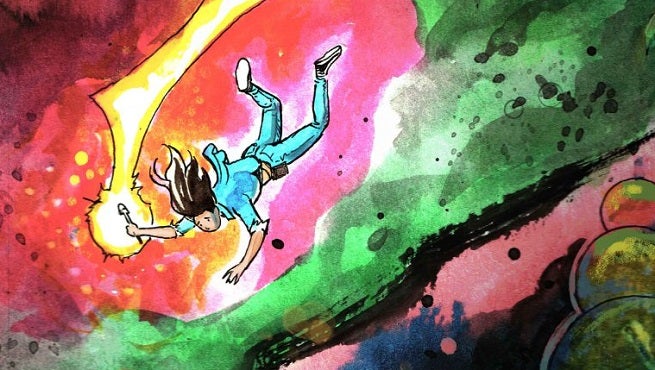 This week saw the release of Amelia Cole #19, the first chapter of the series' fourth story arc, Amelia Cole and the Impossible Fate, which sees both Amelia and Hector, the former Protector of the Blended world before Amelia, shunted through space and time to the magical and mundane worlds, respectively.

In a series that's been fairly comfortable building the "unknown" world at its heart, this is a major change of pace, and one that will likely have repercussions throughout at least this arc.

We spoke with writers Adam P. Knave and D.j. Kirkbride about the issue.

This interview contains spoilers. If you haven't read Amelia Cole #19 yet, get it here and read along with us. 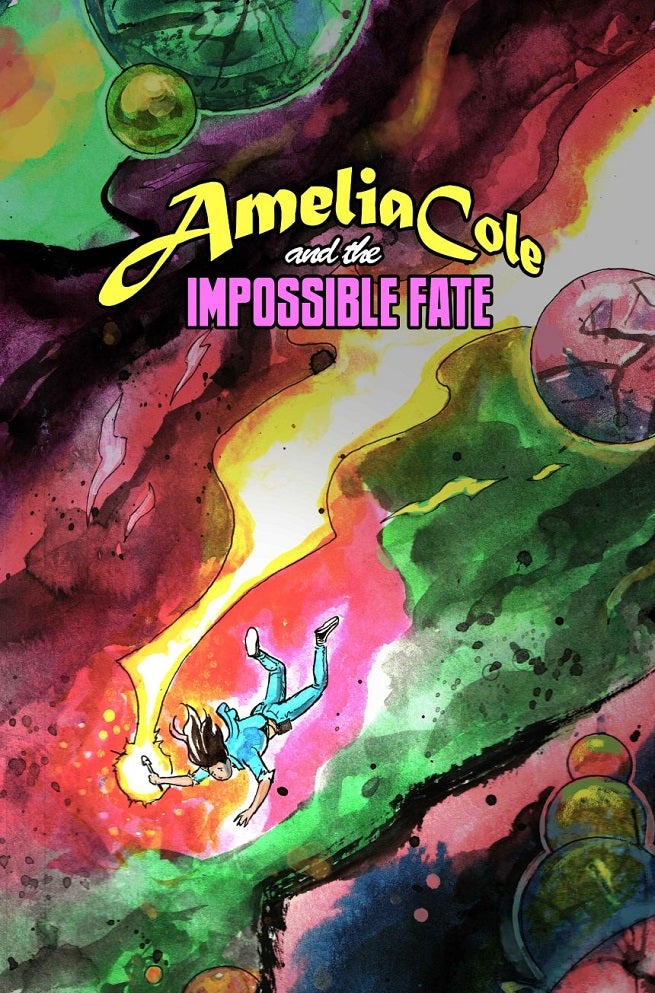 We get what looks like another different look to Nick's art here. Do you feel like the look of the book is evolving around his style, or around the story, or both?

APK: The story and art both keep evolving as we go. Which is the way it should be, really. So when discussing things, we, of course, also heard from Nick with ideas of how he wanted to grow his art and that informs things going forward just as the story helps inform parts of his art choices.

DJK: He just keeps getting better and better, which blows my mind, because he was great right from the start!

I'm guessing "Kirboom" along with the Kirby dots is intentional?

DJK: Oh yeah. It was a very obvious nod to The King. Oddly, we first called the "between worlds" look as "Ditko-space" in the script, thinking of Doctor Strange kind of mind-bending visuals, but that Kirby krackle is too fun not to include, too.

It establishes right away that we're going to divide and conquer the POV this series. I think it's more definitive and cleaner than ever before, possibly becuase it's Hector and not Team Hector. Is that fair?

DJK: Unknown World was pretty much all Amelia, though we did have Hector captions from his first appearance. Hidden War and Enemy Unleashed had two parallel story lines, in the city and the desert respectively.

Now, hey, why not have THREE separate story lines? Muahaha! So, we have Amelia solo, Hector solo, and then their respective teams they left behind. This is a good chance for all of our characters to grow and become more self-sufficient -- while also possibly realizing why they need each other.

APK: Don't all creative teams think three ongoing storylines in 12-14 pages an issue is a good sane idea? Are we alone in this? 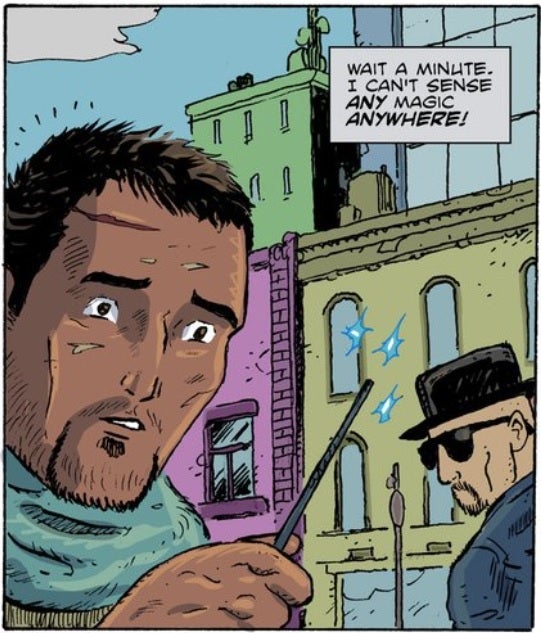 What pushed you guys into the decision that Hector should end up in the non-magic world?

APK: Hector had always been around a world with magic in it. Putting him in the magic only world wouldn't have given us half as much story to play with. But seeing this guy who has never been around just people who have no magic would be a brand new experience for him.

DJK: It's just the most awkward position we could put him in, isn't it? Amelia knows both of those world, so, while she'd be surprised at being sent to either, the Magic World is the most difficult for her due to her past run ins with the law there. We basically put each of them in the toughest spots they can be in... because we're jerks.

I have to wonder: Is there any relevance to Harry's Diner? 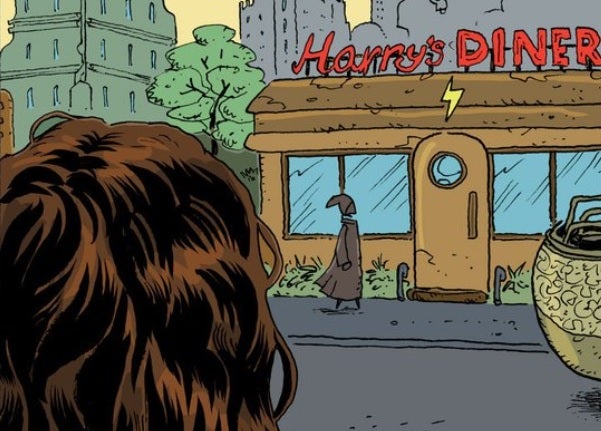 I think Buns of Anarchy might be the silliest Easter egg we've had yet. Also, it's an Easter egg attached to a giant, pink rabbit. So...well played.

DJK: Haha! We wanted a monster that was big and imposing, yet super goofy looking. After the devil horned Persuasion Demons, the lizard lady, the magic-sucking monsters, not to mention that creepy Council, we just wanted something silly. The "Buns of Anarchy" was, like "Harry's Diner," all Mr. Brokenshire

APK: The monster rabbit is named Franklin and enjoys knitting, smashing windows, and broccoli. The Buns of Anarchy themselves go around terrorizing burrito shops, so they're a menace that needs to be stopped.

I'd kind of forgotten she was a fugitive in the magic world. That had to contribute to why she ended up there, just from a storytelling perspective, right?

APK: I don't think it did, at least for me. Getting back to where we left issue 1, in terms of locations was part of the fun for me. Her fugitive status let us showcase how much she's changed, or hasn't changed - and that itself is part of what we can do with her there.

DJK: As I mentioned earlier, though, Amelia being wanted there DOES make it the more dangerous of the two worlds for her. If that wasn't one of the original reasons for it, it definitely came up almost immediately. 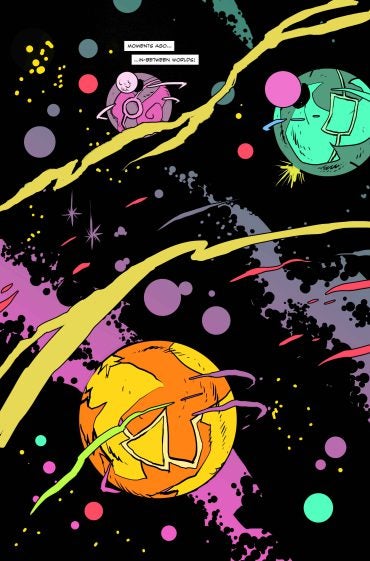 Was it fun getting to play in the magic world again? The visuals are so much more out there and unusual than the Unknown World for the most part, and we didn't really get to spend much time there.

APK: I think D.J. has always held it against me that I pushed to get us to the Blended World as fast as we did, and didn't get to see the magic world in all its glory. Understandable, really, we finally get a chance to really explore what that would look like, and it gives us a chance to think bigger and crazier.

DJK: The first issue twist was crazy and scary enough from both Amelia's perspective and MY perspective, that it was totally worth doing.

I don't hold it against you, Adam, so sleep well tonight knowing that. HOWEVER, it always did feel like a missed opportunity for some crazier locations and visuals, so it's great we found our way back.

APK: We were always going to find our way back, though. Too much fun not to set up rules and then find our own loopholes and deal with that fallout.

Does "nice spell for a cop" indicate that things have changed a bit since she was here last?

DJK: It's more about Amelia's attitude, really. While she's still not for blindly following the powers-that-be, of course, she's a little less anti-establishment for the sake of being anti-establishment now than she was when she was causing a ruckus in the magic world, then hiding out in the non-magic world. She's grown as a character and still might be leery of the badge -- but after meeting folks like Officer Freeman, and even fighting alongside Hector, she knows that it's not the uniform, but the person IN the uniform that matters.

APK: And hey, her last job had her AS the authority figure. She understands them a bit better, even if she doesn't always think too highly of their skills. Looking back that was a really snarky line, wasn't it? I love it all the more for being in-character levels of snark.

Glass Onion: A Knives Out Mystery Features Brilliant Tribute to Among Us