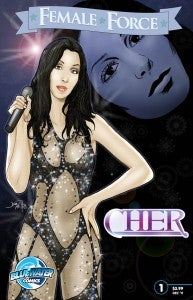 Musical artist and pop culture icon Cher will be featured in an upcoming comic book by Bluewater Productions. And no, it isn’t a zombie-Cher story (no matter what happens to her, she keeps coming and coming). It’s a biographical comic.

‘Female Force: Cher’ is the latest in Bluewater’s books on strong and influential women that are shaping modern history and culture. Says, Darren G. Davis, Bluewater publisher, ‘We have been creating the biographies of the famous in a sequential art form for almost two years and it was only a matter of time before we got to this icon. Her life has been marked failures and successes, but she still stands boldly for herself and for her friends and we had to tell her story.”

And while younger generations might only know Cher because her song ‘Believe’ was a running gag in a ‘Buffy the Vampire Slayer’ TV episode, Cher’s career has spanned over five decades. From early success with husband Sonny Bono, to platinum singer and award winning actress, she’s had a lot of success in her life.

Writer Marc Shapiro said Cher's life and career “reads like a comic book.” “The clothes, the times, the attitudes of the decades she's lived through. The different styles of music she's been involved in. So much of what Cher has experienced is so flamboyant, over the top and just plain out there,” said Shapiro. “She has been very much the real life equivalent of a superhero, and writing about Cher, to a large degree, has been just about letting my imagination go."

Add Cher To the List of Comic Book Subjects