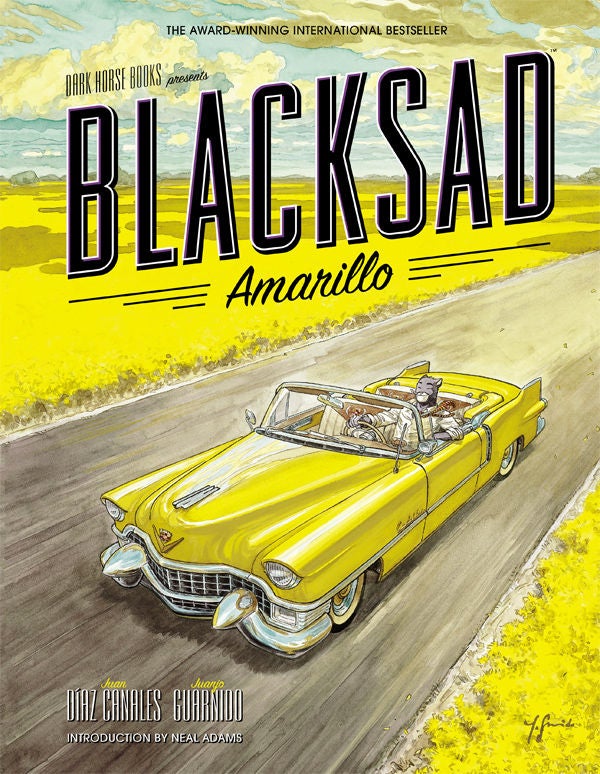 Writer Juan Díaz Canales and illustrator Juanjo Guarnido’s masterpiece Blacksad has returned with its newest installment, Blacksad: Amarillo. For those of you unfamiliar with Blacksad, it is a series of noir-influenced detective stories set in late 1950’s America and filled with anthropomorphic animal characters. Blacksad, the comic’s namesake, is a black cat detective who is often down on his luck and stumbling into trouble.

The story picks up immediately after the events of the previous volume, Blacksad: A Silent Hell, in New Orleans. Blacksad has been left penniless with nowhere to go. His luck seems to change for the better when he’s offered a job driving a yellow Cadillac back to Tulsa, Oklahoma. But like in all good noir tales, good luck is merely a guise which allows the bad kind to sneak up. Blacksad crosses paths with two beatnik writers, Chad (a lion) and Abraham Greenberg (a buffalo and allusion to beat poet Allen Ginsberg). After that fateful encounter, everything begins to go quickly awry. Murders, FBI Agents with a grudge, and a lost heiress all appear as characters are consumed in a vortex of violence and bad choices.

Blacksad has always been focused on those themes. Violence is central to the noir genre upon which these stories are modeled. Yet “Amarillo” seems interested in exploring the nature of violence and the choice to act violently more than any previous volume. It places equal emphasis upon beat writer Chad as a protagonist. His story acts as a parallel to that of Blacksad’s; they are two cats of different colors. The comic’s beginning and ending both focus on Chad. Blacksad may still be the hero of this series, but at the end of this comic he is left to stand witness to Chad’s story.

At the start he is seen being forcefully held underwater by Abraham, his antagonistic friend. They discuss the role of art and writing. Abraham is equal parts destructive and self-destructive. He lights his manuscripts on fire and attempts to throw Chad’s new novel into the pool. Chad appears to be Abraham’s victim, but it does not take long for his own wayward tendencies to be revealed. He steals the Cadillac left in Blacksad’s care and later, drunk and furious that Abraham has mailed the sole copy of his novel to Tibet, murders his friend.

These are the inciting decisions for the drama that takes place in “Amarillo”. Chad’s initial act of violence leads him down a destructive path where many more die and suffer. Each death holds something in common. The motivations that build to the act always seem reasonable. A man is angered that someone has attempted to destroy his masterpiece. A woman is frightened that her attempted rapist may kill someone else. The manager of a circus is desperate to keep his enterprise from failing. Each character that kills or is killed seems reasonable until the moment that someone dies. In the aftermath of each death, there is no triumph of accomplishment though. The faces of those still alive always reveal the same emotions: regret and despair.

Guarnido’s beautiful watercolors capture the emotion and tone of these sequences perfectly. His smooth lines and compositions capably convey to readers what they should feel about each moment. In the panels before every act of violence there is an unstoppable momentum. In the four panels leading to the murder of Abraham, Guarnido builds an incredible amount of tension. Moving from Chad’s shocked expression at the loss of his novel, he then places the two friends in direct conflict. Chad fills a panel with shoulders and arms tightly bound, muscles straining against his shirt, while Abraham slumps back relaxed. The tension in Chad’s frame fills the panel and the dichotomy between his posture and Abraham’s creates an even greater rift between the two. In the two subsequent panels, both of their faces are shown in opposition to one another. They are twisted by anger, eyes slanted and cheeks and mouths curled. Hatred is palpable in the work that leads to the fatal “BLAMMM!!”

Yet the moment after the shooting is entirely still. Chad’s face has changed from being compressed inwards to reflect anger, to being pulled outward in surprise. Smoke hangs suspended in the air. Without any words or effects to provide a frame of time, it forces readers to linger on the act. All of the anger and reasons that led to this are gone, and only Abraham’s dead body remains with one hand hanging loosely in the air. Each act of violence is illustrated with this terrible sort of beauty. The escalation to the act seems inevitable, but the aftermath is always lacks in reason.

At the party, before Chad murders Abraham, a third friend tells them, “No calculated act of violence is meaningless.” This sentiment is revealed to be the thought of a man without any grasp of what violence is, the foolish notion of a flamingo with no understanding of that which he speaks. In “Amarillo” every act of violence is meaningless. It is an act committed by desperate and angry people who feel they have no other choice. Nothing is ever made better as a result though. Each subsequent act of violence committed by Chad and those around him results in the death of friends and the worsening of his own situation. Even when it appears that he may escape the clutches of the law, his demeanor and words are those of a broken man. He may be capable of escaping a trial, but he cannot escape his own actions.

Blacksad’s story reflects upon these ideas, as he is both someone experienced in violence and who has now chosen to shirk its temptation. He begins this story by reflecting upon his own life, telling his friend Weekly that he wants to find a new job where he won’t have to be involved in gunfights and nobody dies. With a look of remorse and pain he notes, “All that hard luck on my tail is starting to wear me down.” Blacksad is someone whose life has been largely defined by violence, both inflicted upon him and, occasionally, by him. The results have led him to a point where he has one friend and no prospects.

Although his path leads him through car chases and fist fights, Blacksad opts away from violence at every possible point in the story. He never once attempts to kill another character, even when he is being wronged at almost every point. This plays out in a drastically different tone in his sequences. Whereas Chad’s story is steeped in pathos and tragedy, Blacksad’s is defined with a muted sort of joy. He makes friends and reconnects with family. Although things rarely go well, Blacksad is seen finding happiness while eschewing the sorts of decisions that dominate Chad’s path.

These two narratives are connected in that both are formed not by fate, but by the choices of Blacksad and Chad. Despite the continued references to luck, both good and bad, nothing happens to either cat by chance. Every consequence they suffer is a direct result of their own decisions. This is a lesson that Blacksad has already learned. When his nephew asks him why he does not carry a gun, he responds, “Good guys don’t carry guns, Ray, ‘cause we know they always wind up shooting someone.”

That wisdom is something Chad and others learn throughout the course of the story. There are two instances in which a character, having hurt someone else, acts selflessly in order to redeem their actions. Both times when asked what they are doing, they respond, “One good thing… I hope.” Despite the darkness that surrounds much of the comic, no one is beyond redemption. The key to that redemption is found in accepting responsibility and making a decision to do a good thing, instead.

Blacksad: Amarillo is a masterpiece, another installment in one of the finest comics being published today. Canales and Guarnido have crafted a meditation on violence and its effects as powerful as anything else found in this decade. It is a story about murder, about actions which only seem to carry purpose until they cannot be undone. It is a story about the American consciousness and its obsession with violence. Yet it is also a story about power of self-determination and alternatives. It is a story about choices, and the ability of every person to stop the cycle of violence.

At it’s end, Blacksad: Amarillo is about one good thing… I hope.

Blacksad: Amarillo - "Every Act of Violence is Meaningless"