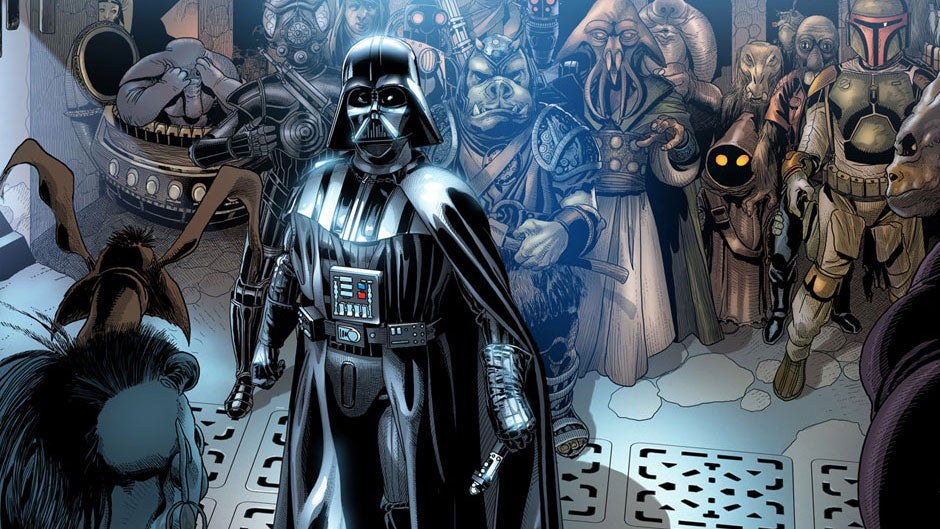 Kieron Gillen has a knack for writing bad guys. Loki in Journey Into Mystery, Lucifer in The Wicked + The Divine, and a whole lot of Nazis in Über compose some of the most striking character profiles in his prolific comics career so far. It follows that he was a wise choice to write one of the greatest villains in all of cinema and pop culture: Darth Vader. Vader is a man who has betrayed his friends, killed countless enemies, and butchered defenseless children. He is a monster without hope of redemption (no matter how many Sith lords he may chuck into reactor shafts). Yet Gillen and artist Salvador Larroca managed to tell a story that invests readers in Vader's goals and may even make them root for the Sith lord, in Darth Vader #1.

It's not the first time that this sort of twisted villain has been made into an oddly approachable protagonist. Hannibal Lecter in Silence of the Lambs stands out as one of the most charismatic and fascinating characters in all of film, despite lacking any morally redemptive qualities. The success of Lecter relies on a two-fold strategy. First, he is composed to be a fully realized character with a rich inner life. You cannot summarize Lecter in a sentence or a paragraph. His desires are complex and various, and his thoughts and plans are always just barely obfuscated. No matter how terrible his goals, it's a thrill to see Lecter succeed in his machinations. The second part is the inclusion of an equally horrifying antagonist who Lecter can be pitted against. Buffalo Bill is every bit as terrible as Lecter himself, and his death at the hands of Clarice Starling makes Lecter's escape much more palatable. These elements can easily be seen in many other great villainous protagonists, including modern examples like Walter White and Tony Soprano. Gillen and Larroca include both of these elements in their presentation of Vader.

Past iterations of Vader in comics have focused on the world around the character. Despite having his name in the title, he would only appear from the shadows to deftly dispatch foes before fading back into legend. Gillen is not interested in treating him like an icon incapable of being addressed; Darth Vader #1 focuses squarely on Vader and his story. He is still a powerful and menacing figure, one of the deadliest and most fearsome men in the galaxy. This does not mean he is without rivals or problems. Vader still serves Emperor Palpatine and has just suffered one of the greatest military defeats in history. It was his plan that eventually led to the destruction of the Death Star, and he is held accountable.

This presents Vader as a character with flaws and weaknesses. His absolute confidence has led him astray and he is now being challenged within the Empire he helped to build. Rivals like General Tagge and Palpatine's own mysterious plans form considerable challenges for Vader to confront. He may have no problem dispatching Rebels, but his own allies pose a more serious threat.

Both Vader's allies and enemies are no more likable than the Dark Lord of the Sith himself. When he is not dealing with the masters of the Empire, he encounters gangsters and bounty hunters who only look good by comparison for not having willfully engaged in genocide. The closest thing to a hero in Darth Vader #1 is a flashback to Vader's confrontation with Luke Skywalker in Star Wars #2. It's difficult to root against Vader based on the alternatives provided. He is no more likable or moral, but he is the most interesting character in each scene, and as a result the default pick.

Gillen makes a smart choice in refusing to provide narration, internal or external. Readers are not encouraged to sympathize with Vader. Instead, he is an enigma keeping only his own counsel. Part of the joy of reading Darth Vader #1 comes in deciphering his choices and coming to understand his motives. He is a challenging, complex character and Gillen's presentation reflects that.

Any narration would underwrite the power of the quiet moments when Vader is left to his own thoughts. Gillen and Larroca have struck upon a rich vein of potential stories between Star Wars and The Empire Strikes Back. While the character arcs and revelations of the Luke, Leia, and Han were well-mapped in those movies, Vader remained a cipher. His discovery that Luke is his son occurs entirely off screen. Gillen recognizes the transformative potential of this and slowly begins to move the pieces into place for that revelation.

Larocca's depiction of lightsaber fights sets an official trend at Marvel Comics in which every time a lightsaber appears, it looks incredible. He focuses on tight shots of the blade and opponents, creating a before and after sequence. One moment there are a pair of Gamorrean guards, and with a flash of light they are in pieces. It's fast and slick, capturing the effect and style that made lightsabers ignite imaginations in 1977.

That dedication to the look and feel of the original films is not as helpful in the rest of the comic. In the opening sequence in Jabba's palace, Larocca relies extensively on characters and imagery from the films. In a splash of Vader standing in the midst of Jabba's entourage, it's possible to trace each character to one of two scenes from the films. Instead of feeling like a rich, alien atmosphere, the result is underwhelming. Fans of the old extended universe might gladly point out IG-88 or Ree-Yees, but it really appears unimaginative. Even the panel that introduces Jabba's palace is pulled directly from Return of the Jedi, suggesting a paused frame of the film.

This too familiar imagery along with the consistent inclusion of well-known characters like Jabba and Boba Fett reads like fan service and distracts from the strengths of Darth Vader #1. Rather than expanding the Star Wars universe, Gillen and Larocca use pre-existing elements with only two notable exceptions. It is similar to George Lucas' urge to tie everything together in his prequel films, making C-3P0 a creation of Darth Vader. Rather than growing the story, these sorts of decisions make the story feel smaller and more contrived.

Darth Vader #1 is at its best when focused on its villainous protagonist. Gillen and Larroca have an excellent grasp of the characters' gravitas and appeal. They manage to make him an understandable individual without undermining the terror associated with his presence. Vader is a frightening presence on these pages. Hopefully, he will have an opportunity to explore more of the galaxy as the series continues.

Darth Vader #1 is available for pre-order at your local comic store and at this link: https://comicstore.marvel.com/Darth-Vader-2015-1/digital-comic/36677