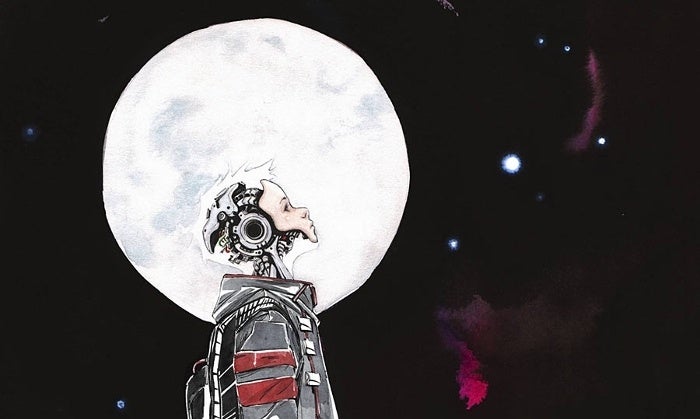 When you reflect on Jeff Lemire's best comics there is one element that creates a coherent thread throughout them all: childhood. Whether it is in the frozen, rural stories of Essex County, the twisty science fiction of The Underwater Welder, or the post-apocalyptic landscape of Sweet Tooth, childhood is a significant part of each story. The experience of childhood features prominently in the first issue of Descender, Lemire's newest comic with co-creator Dustin Nguyen, which already promises to be one of his most fascinating works to date.

Descender #1 introduces readers to Tim-21, an android who awakens at an abandoned mining colony ten years after a cataclysm shakes The United Galactic Council (UGC), a future space-faring civilization comprised of nine core planets. The disaster is caused by nine massive robots called Harvesters who destroy large swaths of the population and infrastructure before disappearing just as mysteriously as they first appeared. As a result humanity has turned on robots resulting in automatonic genocide. And so Tim-21, a small companion robot with the mind and attitude of a child, awakens alone to a world that wants him dead.

That is a terrifying scenario no matter your age. The threats and tension found in Descender #1 are incredible and just like in all great science fiction, Lemire and Nguyen reflect our reality within the alien world they have constructed. The UGC is a government fracturing under pressure between internal groups ten years after a terrifying attack. It is difficult to not perceive parallels between the UGC and the USA just over a decade after 9/11. Their response to the Harvesters destruction is defined by fear and militarization. Left without an easily accessible target, they strike out against those they perceive as being responsible whether or not they bear any pertinent connection to the actual threat. There is a significant increase in militarization both public and private. Descender reflects the worst of our societal and political responses to terrorism over the past 13 years.

The choice to examine these issues through the eyes of a child is a spark of brilliance. Comics like Ex Machina and The Boys have attempted to tackle the post-9/11 climate as well through the perspective of adult politicians and superheroes. In doing so they have always created an air of judgment. Whether it was Mayor Mitchell Hundred pushing for a new law or Billy Butcher cracking skulls, they approached the world as they desired to change it. Tim-21 is a character who possesses an innocence absent from these other stories. Where adults would judge, he is simply trying to understand.

Tim-21 learns of everything that has happened while he was asleep through a series of newsreels on a gorgeous two-page spread. A holographic display reveals historical images in a spiraling pattern over Tim-21's head. The design is such that it appears to be a massive, unfiltered dump of information. However, a series of very well placed captions help to guide the eye back and forth horizontally along the page and through the chronological flow of information. It is the most impressive composition of Descender #1, one that simultaneously creates the feeling of overwhelming chaos and imparts information in a clear, concise manner.

Even more telling is Tim-21's reaction to this shocking avalanche of information. His face is shown in a close up on the bottom right hand corner of the spread. None of the emotions we as adults might feel in response to this news are present. He is not angry or afraid, instead he stands in awe at the massive paradigm shift. Tim-21 lacks the life experience to fully comprehend what this will mean for him; it is simply the next step in his adventure.

That difference between an adult and child's response to this premise is absolutely key to the tone of Descender #1. Tim-21 keeps moving from the moment we awakens, collecting his backpack and a delightful companion. At no point does the thought of hiding or despairing even occur to him. Fear is replaced by an indefatigable sense of hope. All of the adversity and danger that awaits are framed by Tim-21's perspective making the socio-political connotations seem much more manageable. There is fear present though, but it lies with the reader and the adults on the periphery of Tim-21's story.

Context is added through the perspective of Dr. Quon, a famous roboticist, and several other adults aware of Tim-21's existence. Their actions and speech serve to contrast those of Tim-21. Innocence is replaced with world weariness, directness with sarcasm, and innocence with fear and anger. It is a dichotomy that Lemire has beautifully tapped into before in the relationship between Gus and Jeppard in Sweet Tooth.

Nguyen's art suits the perspective and themes of Descender perfectly. Best known for his work on Li'l Gotham, Nguyen has a unique style that manages to seamlessly merge serious subject matter with a sense of whimsy. On Li'l Gotham he would punctuate holiday themed romps with shockingly resonant moments of emotion and catharsis. He brings a similar sensibility to Descender with less exaggerated forms.

This style helps to present Descender from Tim-21's point of view. Nguyen's brushstroke lines and curved forms create a world where everything feels fresh and new. Even when Dr. Quon is shown haggard with plenty of stubble, he doesn't appear to be ugly or repulsive. Instead, the extra lines and detail appear to be stains that require some work to improve upon. Only in rare instances does anything appear frightening, and that's because these exceptions really ought to be.

The use of watercolors helps to enhance Tim-21's perspective as well. Mellow hues of purple and orange are used to color the sky providing it with soft gradients that appear natural, yet otherworldly. Nguyen navigates between subtle brilliance and sterility depending on the setting. Many interiors are a pallid gray or white, perfectly clean and organized. When the story shifts outdoors and into a city, the world lights up with the endless possibilities of exploration.

The possibilities do not lie in the settings alone. There is far more to Tim-21 than meets the eye as revealed in a splash page where he encounters a companion. His body is capable of separating into many distinct section revealing various tools inside. This is the first time in Descender #1 where Tim-21 does not appear entirely human, even though his expression and reactions remain completely recognizable. Nguyen's designs for both robots and aliens are simple, yet distinctive, allowing the eye to linger without distracting from the narrative.

Descender #1 is a stunning debut. Lemire and Nguyen are holding up a mirror to post-9/11 politics and encouraging us to consider our world not only through the lens of science fiction, but through the eyes of a child. It is a beautiful introduction that promises a thoughtful exploration of how we respond to tragedy and adversity without ever losing sight of the hope and wonder of existence.

Advance Review: Descender #1 Considers Our World Through the Lens of Sci-Fi and a Child's Eyes