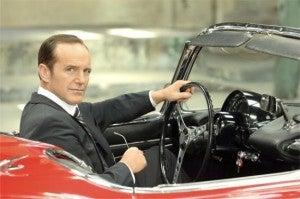 Agents Of S.H.I.EL.D. just finished airing for East Coast viewers. All week ABC has been teasing that viewers should stick around for an after the credits scene. As fans of Marvel Studios movies know, Marvel is famous for including just a little something extra post credits, and ABC wants to carry that fun over to the TV series as well. If you haven't watched the episode yet, then be warned that spoilers follow for the after the credits scene. If you just can't wait or have seen the episode, then keep reading because we will be covering exactly what happened. While ABC teased it as an after the credit scene, the scene actually came right after the conclusion of the episode, but before the credits started. As rumored, Samuel L. Jackson showed up as Nick Fury, and he gave Agent Coulson a thorough ass-chewing for destroying a S.H.I.E.L.D. plane. Here's the dialogue from the scene. Nick Fury said, "Really? Really, Coulson? Six days? It only took you six days to take a completely renovated piece of state of the art machinery and turn it into scrap." Agent Coulson replied, "My team acted with my authority." Nick Fury said, "Don't talk to me about authority. Do you know how much this plane costs? It's got a bar, a really nice one. Talking to me about authority, you know I have the authority to downgrade your ass to a Winnebago." Agent Coulson replied, "I know that, sir." Nick Fury said, "Well, I want it fixed, just like you found it. So don't have Fitz and Simmons going and making modifications... like a damn fish tank." Agent Coulson replied, "Yes, sir." Nick Fury added, "And the new girl, she's a risk." Agent Coulson replied, "I know, sir." Nick Fury said, "You know, sir." As he walked away, Nick Fury asked, "How's Lola?" Agent Coulson replied, "She's fine, sir. Thanks for asking." As he left, Nick Fury mumbled, "Talking to me about authority." On the phone, Agent Coulson said, "Yeah, we're going to have to kill the fish tank." Marvel's Agents Of S.H.I.E.L.D. airs on Tuesday nights at 8 PM ET on ABC. 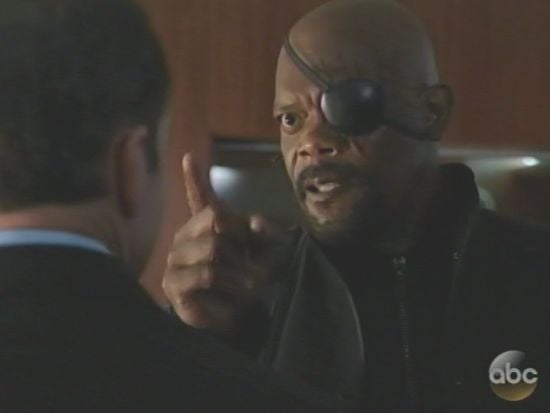 Agents Of S.H.I.E.L.D. After The Credits Spoiler