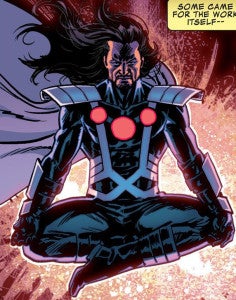 Earlier today, Marvel released the official episode description for the third episode of their forthcoming ABC series Marvel's Agents of S.H.I.E.L.D., in which a scientist appears whose name might strike comic book fans as familiar...

"The Asset" – When the brilliant scientist, Dr. Franklin Hall, is kidnapped, Agent Coulson and his S.H.I.E.L.D. agents must race against the clock to locate him. Skye is their only way in--pushing the team to their limits when the entire plan turns upside-down"

Hall is, of course, the supervillain Graviton, given powers in an accident in the lab--which may be what happens when the plan turns upside-down, if I'm guessing. If I were guessing, I'd also say that Ian Hart is the odds-on favorite to play the character; he was already confirmed as having joined the cast as an unidentified scientist.