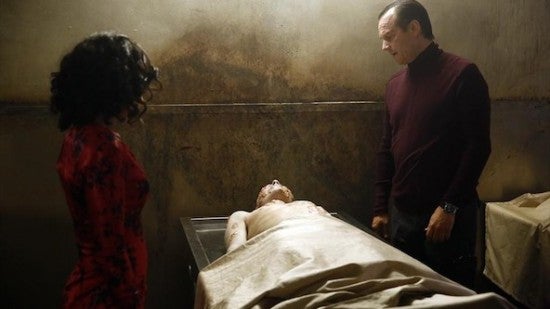 The episode opens with Raina folding paper in her cell. She puts her creation on a shelf with many others. Gunfire comes from the hall. Ward opens her cell door and gives her a present. “A gift from the Clairvoyant,” he says. A flower dress is inside.

Coulson is watching news footage of S.H.I.E.L.D.’s fall. Skye comes in and tells him only three S.H.I.E.L.D. bases are secure. Coulson plans on continuing the fight against Hydra.

Ward takes Raina to a barber shop to meet the Clairvoyant, John Garrett. Garrett clues her in to the fact that he doesn’t have any supernatural gifts. Raina is disappointed. Garrett invites Raina to sit in a barber’s chair. When she does, he says, “Welcome to Hydra,” and triggers a trap door in the floor.

Fitz is repairing the Bus with Simmons and Trip.

In the control room, Skye tells Coulson that the Cube has been taken back by S.H.I.E.L.D. Coulson gets a transmission from Glen Talbot. Talbot is sending in a peacekeeping force to take control of the S.H.I.E.L.D. operation. Talbot says they’re just getting the lay of the land, but Coulson and his team don’t trust him. Coulson expects they’re trying to shut down what’s left of S.H.I.E.L.D. Coulson initiates Odyssey, which means they’re getting out.

The team is trying to getting the Bus ready to fly. Trip wants on the crew, but Coulson doesn’t trust him. Simmons backs Trip up. Coulson relents, but makes Trip Simmons’ responsibility.

Ward answers the phone. Skye tells him about the identity wipe, but he’s unphased. They flirt a bit before getting off the phone. Garrett comments that he doesn’t think even Romanov (Black Widow) could pull off Ward’s straight man act. They begin arguing about Skye and the fact that shooting her was not part of the plan. Ward was only supposed to find info on Coulson’s revival, but things got messy when Garrett realized Coulson didn’t’ know anything.

Garrett tells Raina that they’re restarting phase 3 of Centipede. Garrett reveals several mutilated corpses he’s been testing on. Garrett managed to take some random vials from the Guest House, but hasn’t had any luck testing them. Ward gives Raina the information he took from the Bus. Garrett and Ward head to raid the Fridge.

The Bus is in flight. Skye has taken everyone’s badges and turns them into Coulson. Coulson places them in a safe behind the picture hanging behind his desk, but just then they notice numbers lighting up on his badge. Coulson believes they’re from Nick Fury.

Garret and his team are gearing up to raid the Fridge. Raina tells Ward she was disappointed in the Clairvoyant because there was a question she wanted to ask. Ward says he’s known Garrett since he was teenager. He tells her how he infiltrated the team: selflessly saving Fitz to gain their trust, romancing May to neutralize the biggest threat, playing the loner to get Coulson to want to help him. Ward says he owes Coulson something, but he’s owes Garrett everything.

May comes to Coulson. She wants to take his weapon, but he doesn’t go with it. She questions Coulson’s faith in Fury. May questions whether Hydra was involved in his surgery. She lets slip that someone else was in charge of Coulson’s surgery, someone only Fury knows. Coulson still refuses to hand over the weapon and tells May to get out.

Fitz, Simmons and Trip are discussing Coulson. Fitz wants to stick behind him, but Trip and Simmons doubt it. Fitz says now is the times they stick with someone they believe in.

Garret and Ward arrive at the Fridge. Security won’t let them in without Hand. A helicopter flies up and starts firing on them. They use this to convince the guards to let them inside. Once in the elevator, Ward kills the guards. They put on gas masks before getting out of the elevator.

Ward and Garret are leading their team into the Fridge. Garret reveals that the Slingshot program is a hoax. They actually keep the technology they find in a room in the Fridge called the Toy Store. Garret grabs a plasma gun they found in Peru.

The Bus touches down in Canada. Coulson is going out, but gives the team the choice to follow or not. They all follow.

At the Fridge, Garrett uses the gun to free inmates of the Ice Box, hoping to keep Coulson busy. Ward uses the plasma gun to bust a hole in the floor of the Fridge’s bottom floor.

Coulson and his team are travelling through the cold. Fitz is scanning, but can’t find any signs of life. Even Fitz is now starting to doubt. Skye asks May about why she was spying for Fury. May says the doctors were worried he might be made unstable if he learned what was done to him. May says he was fine until today. They reach the coordinates and begin searching. Coulson tells them they have to find something because the Bus is out of fuel. He insists that the coordinates must mean something and begins having a bit of a meltdown. He throws his badge and its shot out of the sky by an automated turret.

Coulson walks out from behind cover at the turret. The turret asks for him to identity himself. He gives hi name and a hidden passage opens up.

Returning to their hideout, Raina informs Garrett and Ward there’s a problem with the hard drive. Skye programed it to erase itself if anyone other than her accessed it.

Inside the passage, a man tells Coulson’s team that they’ve entered a secret base that he calls Providence. He shows them inside and tells them his name in Agent Koening. He informs that that Fury is dead and the Fridge has fallen. Upon hearing it, Skye immediately calls Ward. Koening asks to speak to Coulson in private.

Koening tells Coulson that he’s been in isolation since the invasion of New York and then tells him that Fury is alive, but no one else can know, by Fury’s orders.

Ward gets off the phone with Skye. Ward and Garrett now know about Providence, but also believes Fury is truly dead. Garret is changing clothing and reveals metal on his chest. Garrett is sending Ward back to get the password for the hard drive. He begins beating Ward to make his story believable.

In the final scene, Ian Quinn comes to Garrett, upset about his former quarters at the Fridge. Quinn is complaining about how bad his life has become since meeting Garrett and joining up with a fake Clairvoyant. Quinn says he won’t do anything else for Garrett. Garrett says he has special gift, and reveals a container with gravitonium inside. Quinn thanks him.