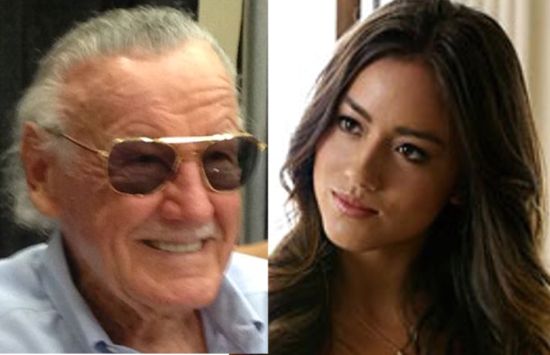 Remember when Stan Lee tried to kiss Agents of S.H.I.E.L.D.'s Chloe Bennet on the red carpet at the Thor: The Dark World premiere. In the video that circulated online of the incident, it looked like Lee was attempting to kiss Bennet on the cheek, when she suddenly turned her head. After seeing Lee's lips headed straight for her mouth, Bennet then pulled back, making for an awkward moment. On Monday night's Jimmy Kimmel Live, Kimmel showed Bennet a photo of her awkward moment with Stan Lee, and Bennet didn't appear to think it was her cheek that Lee was going for at all. Bennet said, "Well, here's the thing. We were at the Thor premiere, and I saw him. I freaked out. His show Stan Lee's Superhumans is one of my favorites, ever. And I saw him, and I'm like 'Stan Lee! I'm Chloe! I'm on Marvel's Agents of S.H.I.E.L.D.' And he's like, 'I should watch that.'" When Jimmy Kimmel asked if Lee really said that about not having watched the show, Bennet replied, "Yeah, he really had no idea." "He just kind of like saw a low cut shirt I think, and just went in to kiss me. And in a split second in my mind, I was like, 'Ok, you've got to make a decision. He's going for my mouth. It was a straight aim. There may have been tongue. I don't know,'" added Bennet. "And I was like, 'Kiss or turn or what.' So I like double-chinned it, which is what that was." When Kimmel asked if she felt like she should have tongued him since it was Stan Lee, Bennet said, "I really should have. But he did a cameo on our show. So he'll be on our show in the next episode. So I'm glad that didn't happen. It would have been like a really awkward run-in after an awkward date. He probably actually would not have remembered."