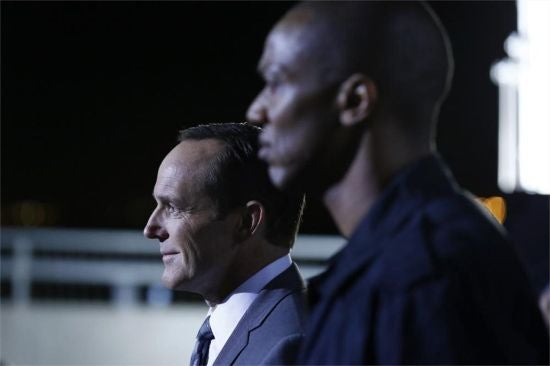 Marvel has released three sneak preview clips for tonight’s Agents of S.H.I.E.L.D. Episode 10, which is called “The Bridge.”

The first clip is a montage of various scenes from the episode, which revolves around the return of Mike Peterson (as played by J. August Richards). In the second clip, an inmate is eating lunch at Havenworth Federal Penitentiary. Three men come crashing through the ceiling and break the inmate out. In the third clip, Agent Coulson, Mike Peterson, Agent Ward, and Agent May are walking through what appears to be an abandoned warehouse. Agent Coulson tells Agent Fitz to dial Hayward’s number, and a ringing sound come from inside one of the containers. A man with super-strength bursts out of the container and attacks Agent Coulson and his team.