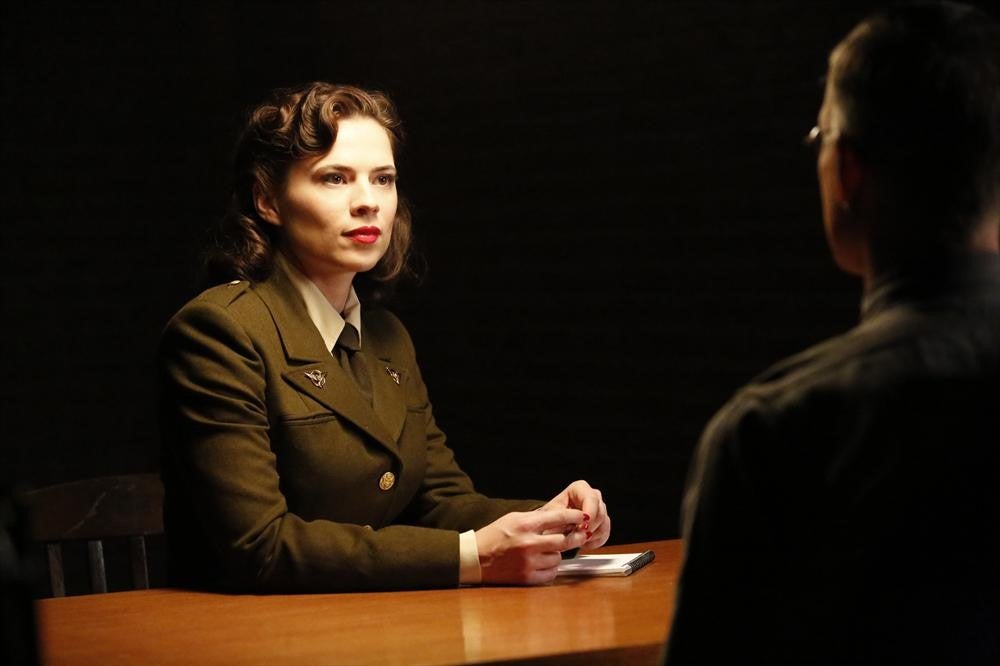 The episode opens in Austria, 1945. Whitehall is interrogating someone who was digging in the ground. The man says he has heard the same stories that they had heard. The Obelisk is there. Whitehall has the ma touch it and he does and dies. Whitehall brings in another woman, Asian like the man before her. They force her to touch the Obelisk. It reacts, but she does not die. Whitehall wants to study her, when another Hydra soldier comes in with news of Red Skull’s death. They cage the woman, and prepare to leave.

Present da, Whitehall is disappointed with his scientists’ progress studying the Obelisk. He brings in the Doctor. The Doctor offers information on the Obelisk, claiming to be an expert. Whitehall assumes the Obelisk is a weapon, but the Doctor says it’s a key and only kills to protect itself. He calls it the Diviner, and says it will do something much cooler if brought to a specific place.

Coulson is heading to Hawaii. They’re still looking for Ward and interrogating Bakshi. Coulson thinks they need to stay ahead of the enemy by finding the city before Hydra does. Morse has finally gotten Bakshi talking, though he hasn’t said much. Hunter and Mack discuss concerns about Coulson’s health. Simmons enters and changes the subject to the interrogation. Morse tries to plant doubt in Bakshi’s mind about being brainwashed, but Bakshi says he’s part of a grand history going back to Red Skull. Morse leaves and shares info with the others, as May comes in, saying she thinks Whitehall has firsthand knowledge of Red Skull, because Bakshi calls him a “disciple.”

Senator Ward is in his vehicle, arriving at his family’s summer home. He’s speaking to what sounds like a mistress when Grant Ward busts the window and throws him out of the car.

Arriving in Hawaii, Coulson gives Trip and Skye a very specific set of cloak and dagger sounding instructions. Meanwhile, he sets Fitz to developing muscle memory to activate a device in the field.

Morse and Hunter discuss Bakshi. She believes Bakshi crossed Whtiehall at some point, and working for Whitehall is a second chance. Simmons bring one of Agent Carter’s old files to May. The file refers to Werner Reinhart, who is said to be Whitehall’s commanding officer, but is actually a name that Whitehall goes by.

Flashback to 1945. Carter enters an interrogation room with Whitehall. Whitehall wants a deal. He offers information about a way to save humanity, information on all the items Carter and her team recovered from his hideout. He talks of a myth from the east of a star that fell from the heavens, angels come with gifts to save humanity. He says he’s based his life on the story, but the angels were actually conquerors.

In present day, The Doctor corrects Whitehall, saying those “angels” were here to end mankind, with a few special exceptions. He says those special few would use the Diviner as a key to open the temple in the city. Whitehall is hesitant to trust the Doctor. The Doctor says he just wants to be reunited with his family, in the afterlife.

Ward has his brother bound, and his walking him through the woods. They argue, with the Senator saying he rescued Ward. The Senator says their parents were awful, but they didn’t light the match. Ward says he takes responsibility for his actions. He picks up a shovel. Christian realizes he’s still thinking about the well, and says it was Grant Ward that nearly killed their brother Thomas. He says their parents buried the well, but Grant says they just covered it up.

Fitz is working on the device, but he’s still not able to perform the task in time. He thinks Coulson is testing him, but Trip says to trust Coulson. They leave for the Australian outback.

May’s team is going through Carter’s SSR files that never got integrated into S.H.I.E.L.D., and therefore were never seen by Hydra. Simmons recognizes Reinhart as Whitehall. May discovers that he grew old in a prison called The Rat, and must have found a way to reverse his aging.

At The Rat in 1945, Agent Carter tells Reinhart that he will be left there. We see time lapse of Reinhart’s captivity. The cell changes around him. In 1989, Reinhart, now elderly, is being transferred at Alexander Pierce’s request. The agent there to perform the transfer hails Hydra, and says the woman is still alive. They take him to Austria, where some village elders are, and the woman from 1945, who hasn’t aged at all. He plans to experiment on her.

May’s team discovers that Reinhart changed his name when he changed his age. Hunter leaves with the file and gives it to Morse, to use in interrogating Bakshi. Bakshi tries to turn it on Morse by bringing up the things Morse did to ingratiate herself to Hydra while undercover. Morse reveals what they know about Whitehall. Bakshi slams his face into the table to break a cyanide capsule in his cheek.

The Wards are still arguing about who was responsible for putting Thomas in the well, as Christian continues to dig. Christian suddenly hits Grant with the shovel, but Grant catches him before he gets away. Grant pulls off the cover to the well and forces Christian to look down. Grant threatens to throw Christian in the well, and Christian admits he did it to Thomas, that he wanted him dead. He says Thomas was the only one their mother didn’t torture. He wanted Thomas to feel their pain, but didn’t have the courage to do it himself. Grant says that’s all he wanted to hear, and helps Christian up and hugs him. Grant says its time they went home.

In Australia, Coulson and team gear up to go into the field to infiltrate a satellite system. Coulson says something feels off as they enter the satellite station. The Hawaii site goes offline, and their six minute window begins. Communications become jammed, and they’re ambushed by Hydra. Trip is shot while protecting Fitz. The Doctor shows up and offers to help.

The Doctor begins working on Trip. He calls Coulson Phil, and then realizes he shouldn’t’ have done that. With Trip’s life in his hand, he forces Coulson and Fitz to disarm. The Doctor hints to Coulson about the city. He says whatever is in the city, his baby will be in the center of it. Coulson calls her Skye, and the Doctor gets angry. He tells Coulson how to save Trip to keep him busy while he makes his escape. The system goes online, and Skye begins her work. Trip stabilizes.

Whitehall is talking to someone about second chances. The scene flashes back to him dissecting the un-aged woman, and then him de-aging. He tells his man that he took everything he could from the woman. The person he is speaking to is Grant Ward. Whitehall reveals a news report on a murder suicide with Christian Ward and his parents. The report plays Christian’s confession to Ward as if it was a suicide note.

Hunter questions Morse’s motivations when questioning Bakshi. They argue about Hunter’s inability to trust Morse, and then go have sex in a van.

Coulson returns with Fitz, and Skye shows that they’ve begun mapping the earth. The program finds a map for the city.

The Doctor returns to Whitehall, as he’s talking to Ward. Ward says he knows Coulson’s team like family.

Flashback to a younger Doctor holding his dead love, and promising to do to “him” what he did to her.

Agents of S.H.I.E.L.D. Season 2 Episode 8: The Things We Bury Recap With Spoilers