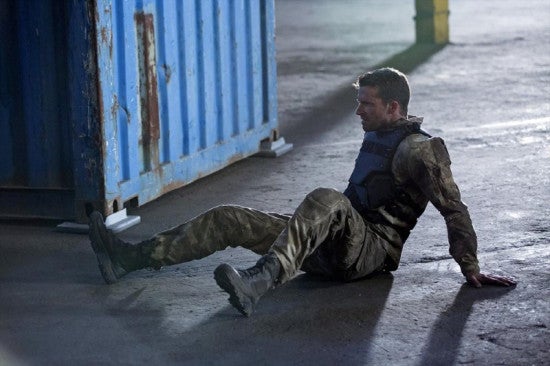 The opening scene for next week's new episode of Marvel's Agents of S.H.I.E.L.D., titled "The Bridge," has been released online via the show's social media accounts. You can see it embedded below.

The episode, which features the return of J. August Richards as Mike Peterson, the Extremis-enhanced character he played in the Joss Whedon-directed pilot episode, will be the first half of a two-part midseason finale leading into next week's final episode of 2013.

In the episode, Centipede launches a daring assault on a prison, drawing the attention of S.H.I.E.L.D. when a trio of Extremis soldiers crash through the ceiling and abscond with the mysterious man who appeared at the end of "Girl With the Flower Dress."

In a shocking cliffhanger episode, Coulson takes the war back to Centipede, and this time he brings in Mike Peterson for some super-soldier support. As they get closer to the truth, startling secrets are revealed and an unexpected twist threatens the team.
Start the Conversation