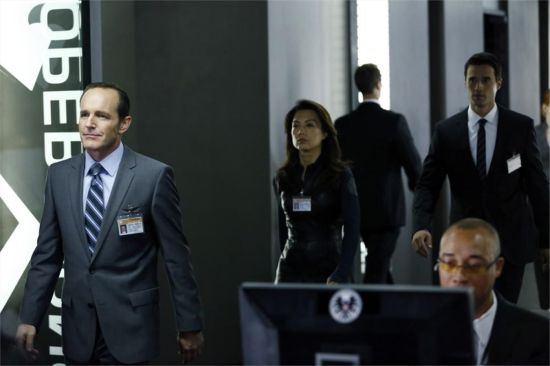 The episode begins with Coulson, being led with a bag over his head, through the halls of a dank building. He quips to the large foreign men who brought him there, and one punches him. Then their boss comes in, and selects a torture device. Coulson asks him if he has the intel on him, saying that they know, and that they have three minutes...Agent Shaw.

Melinda May joins the room and the three take out the bad guys. They work their way out of the building, coming out in a frozen wasteland where they stand in front of dogsleds that are rocket-powered and bring them to the Bus.

Back in the Bus, Simmons is removing a device of some kind from the undercover agent's sinus cavity. Coulson tells the pair that they're headed to The Hub. Everybody follows him into the body of the plane, where he tells them he can't tell them anything about the intel on the chip because it's Level 8 classified. 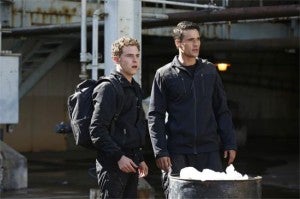 The group heads to The Hub, S.H.I.E.L.D.'s hidden headquarters where everybody is wearing the same suit. She wants Coulson's help looking for the redacted S.H.I.E.L.D. file on her parents. Coulson says maybe. Sitwell joins the group, telling them that Victoria Hand is waiting for Coulson. Fitz and Simmons go exploring the campus but Skye's "ID," her bracelet, won't let her have access to anything.

Coulson joins Hand, who tells them that a separatist group has created an "Overkill device" to declare their independence from Russia and Georgia. The device uses vibrations to set off other people's weapons. She wants Ward and another person who can identify the device on sight to go on the mission. Outside, Fitz is having trouble getting through the automated security doors, and Ward indicates him and says, "Seriously."

On the plane, Simmons is shocked Fitz is going into combat. He's trying to remain calm, maintaining he can do it. He tells her not to do anything dangerous while he's gone. She tells him that she made him a sandwich for the trip.

May tells Ward he has to disable the device by 6 a.m. and call for extraction. Fitz joins the group, saying they have to get moving because time isn't on their side. Skye is concerned about not going with them, but Coulson tells her the decision is above his head and made by the smartest people there are.

Ward goes into a bar to look for a Georgian contact, but when he does so, a bunch of people pull guns on him, telling him his friend is dead and he has no friends there.

On the Bus, Skye wants May to tell give she and Simmons an update on the mission, but May won't talk and shoos them out of the room. Skye tells Simmons she's going to get some information from Coulson.

At The Hub, Coulson and Victoria Hand are talking; he catches himself telling her that Tahiti is a magical place and stops himself. She tells him that he'd better hope his agents are as good as he thinks.

Back in the field, a woman who appears to be in charge of the people who took Ward and Fitz comes in and demands answers from them. They try to convince her that they're on her side--they are, since she claims to be no friend to the separatists, but she doesn't trust them and orders them shot. Just then, though, the power goes out and the room goes black.

Back at the Hub, Skye is trying to get something out of Coulson. He tells her she has to trust the system.

"He's acting like a robot version of himself right now," Skye answers when Simmons asks her how the conversation went. Skye convinces her to help her find information on the mission.

In the bar upstairs from their captors' hideout, Fitz saves their bacon by fixing the electricity, which brings the sporting event everyone was watching back on the screen. Everyone celebrates, and the woman in charge orders he gets a drink--but the bad guys are still keeping their hands on Ward ominously; Fitz tells her they need to get down to business.

Shortly thereafter, they're on board a truck full of beer kegs. Ward complains taht Fitz overpaid to get their escape, but Fitz boasts that he's the one who took out the power with a localized EMP and that his plan had worked. The truck rumbles to a stop and there are gunshots outside.

After waiting a few moments, Ward kicks a pair of the kegs out, then shoots them and the pair manage to take out the border patrol who are incapacitated by the blast of alcohol...but reinforcements are coming.

On board the Bus, Coulson goes to May while she's doing yoga and starts talking to her about how much he likes the setup on the plane. He tells her that he finds himself agreeing with Skye and it makes him feel soft. He uses her silence to talk himself into trusting the system.

Inside The Hub, Simmons has figured out a way for Skye to hack into S.H.I.E.L.D. and find the mission files. She's trying to gain access to a computer terminal when she's approached by Agent Sitwell.

Back at the border, Fitz and Ward are working their way through a drainage pipe.

Agent Simmons and Sitwell are talking about the panel, and when he figures out she's on a comm circuit with someone, he calls for help; she shoots him with the "Night Night gun" and runs to Skye. Skye says they need to get May.

Back in Russia, Ward and Fitz are hiding out when Fitz opens up the sandwich Simmons made for him. He offers half to Ward, who throws it away. Ward is upset that Fitz brought a sandwich that the dogs tracking them could smell; Fitz tells him off for being a control freak. Ward gives him some food to replace it, which he says is odorless.

Inside the S.H.I.E.L.D. system, Skye is distracted from her mission by the prospect of her parents' files. She nearly runs out the clock on their mission trying to access it, but then finds that Ward and Fitz are alive and on the border, but no extraction is planned. As she's figuring this out, Coulson approaches her, and she tells him she won't trust a system that sent Ward and Fitz in to die.

At the mission site, the pair are hiding inside a sleeping bag that allows them to blend in with the road. They use it to hitch on board a truck.

Back at The Hub, Skye and Coulson are fighting over the fact that she's not capable of being trusted with a secret. She asks him if he knew there was no extraction plan for Ward and Fitz; he tells her that's classified, and leaves.

Back in Russia, the pair 's truck drops them at their destination, where Ward says he's going to signal for extraction. While Fitz is ranting about the science of what he's doing, Ward, realizes that there's no extraction plan coming. Fitz is watching Ward take out the guards through a special monitor he mounts on the exterior, when Ward brings him to find the Overkill device. Once they crack it open, Fitz says it's going to take a while.

Coulson enters the situation room, where he confronts Hand about the fact that there's no extraction plan. She tells him that neither Black Widow nor Hawkeye ever have an extraction plan, but he says they always know that going in. Hand tells him he needs to trust the system.

At the Overkill Device, Ward tells Fitz there's no extraction plan; that they're on their own once the device is deactivated. The pair are bickering, with Fitz trying to prove his worth and telling Ward that Coulson also told him to watch out for Ward.

Back at the Hub, May, Simmons and Skye are planning an extraction. Coulson tells them he's joining their cause.

Fitz deactivates the Overkill device and Hand tells the troops that they're ready to attack the facility; before the Agents can leave the device to make their escape, alarms start to blare. Fitz starts using a specialized weapon to take out a numebr of the Separatists' weapons while Ward fights the people who are coming into the room and S.H.I.E.L.D. attacks from above. Once everyone is down, they make their way out the doors, only to be met by dozens of armed soldiers and a S.H.I.E.L.D. group going at it. The Bus flies over, with the two realizing that their team has come to rescue them.

Back at The Hub, Sitwell and Hand are discussing the mop-up; she seems pleased that Coulson figured out a way to pull off the extraction, while Sitwell is clearly annoyed. On board The Bus, Simmons asks him about the sandwich, and he tells her it was delicious. Skye punches Ward on the shoulder and Ward credits Fitz for getting them out. Fitz is bragging to Simmons about the mission; she tells him about shooting Sitwell.

In her room, Skye is sitting around all melancholy when Coulson comes in and tells her he found her file. It wasn't about her directly, but about the person who dropped her at the orphanage; an unidentified, female S.H.I.E.L.D. agent. He put in a request to dig into the files for more information.  She hugs him and he looks...bored?

He goes to May, telling her that he can't tell Skye why a S.H.I.E.L.D. agent dropped her at the orphanage; that he can't, because some things were meant to stay secret. He asks for her help finding out "what really happened," and May says she'll try. She says, "Poor girl."

The P.S. involves Coulson making a phone call, asking The Company for access to a file designated BCY307604. His authorization code is X-2896. He's looking into a death and recovery file on a S.H.I.E.L.D. Agent, but he's rejected since he doesn't have enough access.

Agents of S.H.I.E.L.D.: The Hub Recap With Spoilers