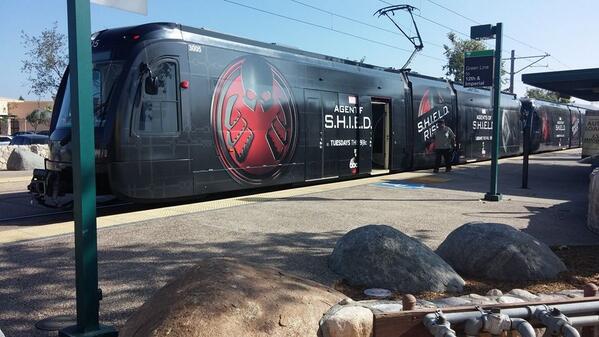 By this time next week, much of downtown San Diego will be decked out in comic book and pop culture imagery, as Comic Con International: San Diego takes over the convention center, the baseball stadium, the bayfront and more.

Right now, though, Marvel are clearly the most aggressive; in a city already featuring Guardians of the Galaxy banners on street lights, Variety's Marc Graser has spotted an Agents of S.H.I.E.L.D.-branded train rumbling through town.

#AgentsofSHIELD got a jump on Comic-Con. Its #SDCC train is already in San Diego. pic.twitter.com/BhmBQ14Nxm

Agents of S.H.I.E.L.D. Train Spotted in San Diego Ahead of Comic Con