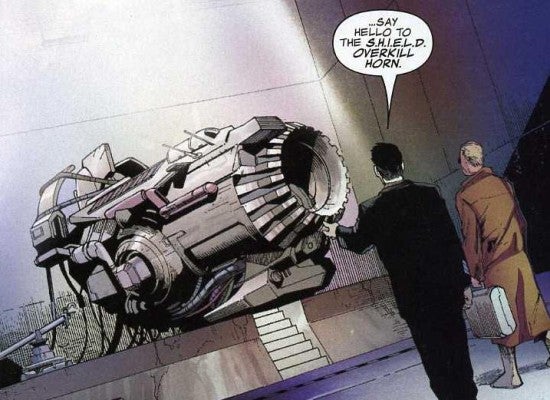 One of the things that has made Arrow so popular among comic book fans this season is the fact that every little background concept, antagonist or background character could turn out to be familiar from the comic book source material.

It's something that fans have often lamented they'd like to see Marvel's Agents of S.H.I.E.L.D. do better--and this week, they certainly did.

If the addition of Agent Sitwell from the movies and Victoria Hand from the comics wasn't enough for you, know this: the huge, potentially deadly weapon that Ward and Fitz were sent into Russia to deactivate? That's an artifact from Iron Man comics.

According to the Marvel Comics Wiki, "The Overkill Horn was designed during the Cold War, to seek enemy weapons thousands of miles away. It was used twice, before being classified as Z-class weapon, too dangerous to be used again, and kept in a weapons storage beneath the Pentagon, until Nicolas Weir released a Nanomolecular Assembler Cloud which began trasforming it and reconfiguring it to his exact specifications."

Wht do you think--did you recognize the Overkill Horn?

Agents of S.H.I.E.L.D. Used a Marvel Universe MacGuffin This Week