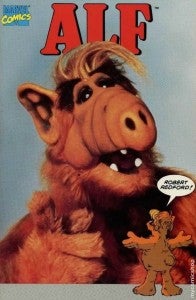 A feature film adaptation of the popular '80s sitcom ALF will move forward with Sony as its distributor, according to a new story in The Hollywood Reporter.

Creator Paul Fusco, who voiced ALF for the TV series, an animated spinoff and a number of side projects over the years, will produce, along with his co-creator and fellow ALF TV producer Paul Patchett and Jordan Kerner, Sony's contribution to the mix, who produced last year's live action-GCI hybrid of The Smurfs. Like The Smurfs, ALF will be rendered by computers in this new interpretation, with the puppet version of the character put away until the next reboot.

While obviously no casting is official yet, it's widely assumed that Fusco will remain the voice of ALF.

"ALF" is an acronym for Alien Life Form, but also used for the character name--in the same way that "E.T." served both purposes in Spielberg's '80s masterpiece. The series revolved around a wisecracking, cat-eating alien who crash-lands on Earth and stays with a suburban family who hides him from the U.S. government while he tries to return to his native Melmac.

The series was a sensation for a couple of years, spawning Burger King toys, a comic book series and more before the public got ALF fatigue and the series was quietly cancelled. The affable alien went on to be a regular feature on VH1 specials and Hollywood Squares, and Fusco has been trying to generate interest in a feature film for a while now.

“I think the timing is right. That’s a big important thing, timing,” Fusco said back in May. “There have been movies out there of characters that I didn’t think were on the same parallel as ALF that got movies made, so I think it’s time. I think it could be a home run on a lot of levels.”