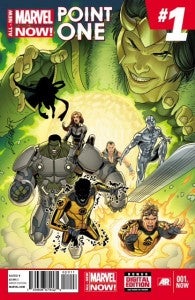 Marvel Comics have released a sneak peek at All-New Marvel NOW! Point One, the one-shot due in stores on January 8 and meant to send the Marvel Universe off in its next big, new direction.

"All-New Marvel NOW! Point One kicks off 2014 in style with six bold new stories that offer a glimpse into the exciting future of the Marvel Universe," said Axel Alonso, Editor In Chief, Marvel Entertainment. “From the voyage of self-discovery of the new Ms. Marvel to eye-popping cosmic adventures of the Silver Surfer to the globe-spanning espionage of Black Widow, All-New Marvel NOW! Point One is THE place for new and longtime fans to dive in.”

Once again, the biggest creators bring you the biggest characters in the biggest stories…and it’s happening NOW! For more on All-New Marvel NOW!, please visit www.marvel.com and join the conversation on Twitter with hashtag #AllNewMarvelNOW.