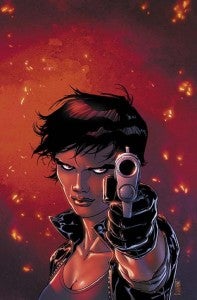 In a marketplace full of white guys, DC Comics announced today that Amanda Waller will become one of the handful of women of color to have her name in the title of a Big Two comic in March when the Suicide Squad: Amanda Waller one-shot hits from the creative team of Jim Zub and Andre Coelho.

The character, a fan-favorite who has appeared in other media including Justice League Unlimited, Arrow and the Green Lantern movie, has been a bit controversial since the launch of the New 52, when the "classic" Amanda Waller--a heavyset, imposing woman nicknamed "The Wall"--was replaced by a version who looks more or less like every other female in most superhero comics (read: like a supermodel, but with a gun).

Now, alienated from the organizations she's been leading for years, Waller will apparently face off against a powerful enemy with an axe to grind--and it'll give Jim Zub, whose run on Birds of Prey was over before it started--an opportunity to take the reins on one of the DC Universe's most significant female characters.

As head of both Suicide Squad and A.R.G.U.S., Amanda Waller has made a lot of enemies over the years. And now, without either of those groups at her disposal, one of those enemies has come to kill her! She must stop him all by herself or die trying…

Amanda Waller Gets Her Own One-Shot in March

Fallout 76 Is Now Free-to-Play for a Limited Time

Paper Mario Fans Are Horrified By Peach's Crease Yourself Comment