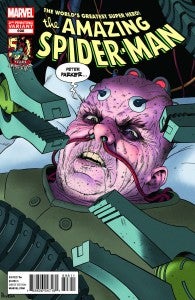 After weeks of writer Dan Slott warning retailers that they hadn't ordered enough copies of today's blockbuster Amazing Spider-Man #698, Marvel Comics wasted no time this morning in issuing a "we told you so" statement, along with the announcement of a second printing set to hit stores in the coming weeks.

The second printing, which will feature a variant cover, will be stores on December 19.
Start the Conversation