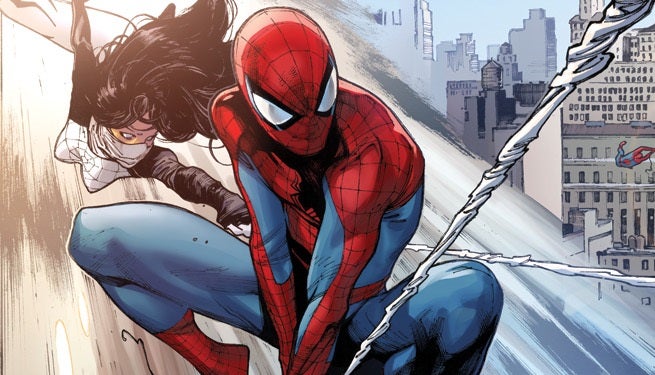 Marvel Comics has released a preview of Amazing Spider-Man #9, the first chapter of the epic, multiverse spanning Spider-Man event, Spider-Verse, from the creative team of Dan Slott & Olivier Coipel.

In Spider-Verse, Peter Parker and thousands of Spider-Men and Spider-Women band together to stop Morlun and his kin from exterminating spider-powered heroes across the entire multiverse.

“The sheer scope of this event and the amount of Spider-Characters in it,” shares Spider-Editor Nick Lowe, “are mind-boggling, but what’s crazy is that Dan Slott and Olivier have been able to squeeze everything but still have a story that has heart and truly counts.”

Alone, Morlun was nearly enough to eradicate Peter Parker. How can Peter stand against an entire family of Morluns? This deadly family stalks the multiverse, exterminating spider-powered heroes as they go. It will take the combined powers of thousands of spider-powered heroes if they are to have a single hope of survival. Even then, they may not be enough.