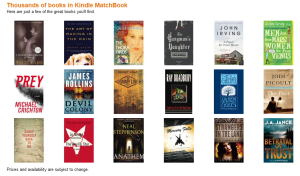 Amazon announced yesterday that they will be taking a page from the Apple Playbook with Amazon MatchBook, which will allow publishers to include free or deeply-discounted ebooks as a toss-in when customers buy the physical copy from the popular online retailer. Purchases made on your Amazon account back to the company's founding in 1995 are eligible for the program, and electronic backup copies of your books will begin to be available (for select titles and select publishers) beginning in October. Amazon expects more than 10,000 titles to be available at the time of launch, although many of those will be self-published works and Amazon Books publications, the authors for which reportedly opted in to such a program when they signed their initial royalty agreements. Amazon MatchBook is a bit like iTunes Match, a program by which your CDs and other previously-purchased content can be synched to your iTunes account by paying an annual fee for the program. Your "matched" content will be available for download on demand to your iTunes-compatible PC or mobile device, much the same as Amazon's program, where books you've purchased will be available for download to any Amazon app. The major difference, besides the fact that you're paying a la carte on the Amazon MatchBook program rather than subscribing to a service, is that since there's no practical way to "prove" ownership to Amazon, the program is, at least so far, only available to those items you've purchased at Amazon. 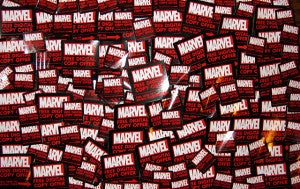 While it's not yet clear which publishers will take part in the program--and not only has no comic book publisher admitted to having signed up, but no comic is pictured in the dozens of sample titles on the Amazon Kindle MatchBook website--what's potentially interesting is the precedent it's setting in the publishing industry--that, like the Blu-ray market, digital copies may become standard as a "throw-in" when readers have purchased a hard copy. That's a standard that Marvel Comics has been adhering to--at least for the limited number of comics and graphic novels for which they choose to do so--as opposed to DC Comics, who charge a little extra for digital editions and offer readers the opportunity to buy a version that comes without digital bundled in. The difference is minute, since Marvel only bundles in digital for their $3.99 comics and most DC titles are $2.99, but select titles can be upgraded to a digital bundle for an extra buck. What's different is the terminology and the audience perception: calling the digital copy "free" as part of the purchase rather than making it a perk you can add for a little extra money changes the conversation somewhat, and potentially skews toward the consumers by creating a status quo where charging extra for digital is considered unusual. Now, the ball is in Amazon's court to find a comics publisher willing to be the first to take the plunge. Image Comics seems an obvious choice, given their recent commitment to DRM-free digital comics, but so is Valiant Entertainment, who have an existing relationship with Amazon through their Kindle Worlds "professional fan fiction" program.