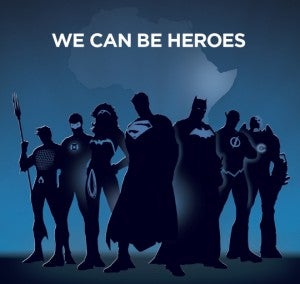 Tomorrow's episode of Anderson Cooper's talk show Anderson will feature a segment on DC Entertainment's highly-publicized We Can Be Heroes campaign, which is meant to fight drought and famine in the Horn of Africa. [Insert joke about "DC's new gay hero" here.] The chat host has had a busy week, making headlines by kicking an unpleasant guest off the show and then, two days later, criticizing the Obama campaign. Maybe he's making nice on that last score, though; We Can Be Heroes is a cause that's drawn support from Dr. Jill Biden, the wife of U.S. Vice President Joe Biden. "This is a tragic situation affecting millions and millions of people. Everyone has the ability to be a part of the solution and efforts such as We Can Be Heroes help bring us closer to that goal," Dr. Biden in one of the campaign's first press releases. According to the organization, she visited refugees in Kenya in August 2010 and has worked to raise awareness of the crisis. "I commend the efforts of DC Entertainment, Warner Bros. and other organizations who are using their global reach to help raise awareness of the crisis." DC's blog, The Source, had this to say about the episode, which airs tomorrow at 3 p.m. EST in most markets:

"Last summer, Anderson Cooper travelled to the Horn of Africa and met with refugees suffering from drought and famine. He is one of the few reporters willing to devote time to cover the crisis. Thanks to Anderson for encouraging people to be a hero by giving to the campaign! For listings in your area, go here."

Anderson Cooper to Feature DC Entertainment's We Can Be Heroes