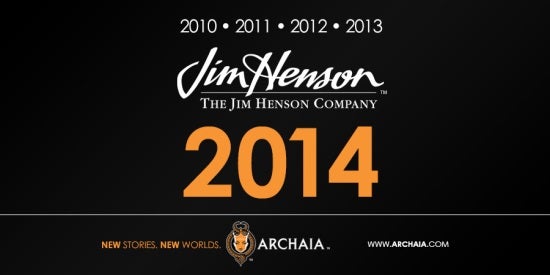 It looks Archaia Press has plans for 2014 involving the works of the late Jim Henson, if the teaser image they released this morning is anything to go on. Jim Henson was, of course, the legendary puppeteer, artist and creative vision behind The Muppets, Sesame Street, and many other iconic characters. As implied in the teaser, Archaia has been producing comics based on Henson's work since 2010, including comics based on The Storyteller, The Dark Crystal, Labyrinth and Fraggle Rock. Archaia is now an imprint of BOOM! Studios, which had been producing comics based on The Muppets until Disney, who now owns the property, purchased Marvel Comics and transferred the rights to them. No hint yet as to what specific properties will see publication in the coming year. Perhaps more stories from The Dark Crystal or Labyrinth universe? There's always room for more all ages comics if Archaia wanted to revisit Fraggle Rock. The Jim Henson Company did have a hand in the creation of Neil Gaiman and Dave McKean's movie MirrorMask as well, so maybe we'll see an adaptation of that? Seems a longshot, but it would be pretty cool.

Archaia Has Plans For Jim Henson's Creations In 2014