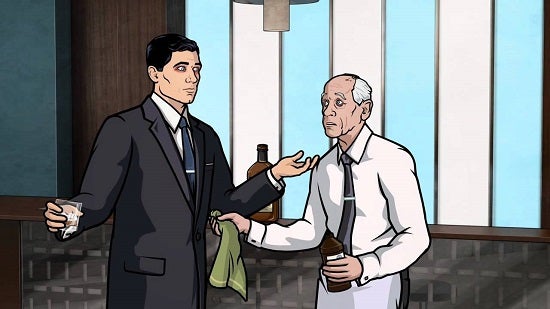 Archer star H. Jon Benjamin conducted a Reddit "Ask Me Anything" (AMA) conversation with fans today, and while most of the questions were pretty run-of-the-mill, one in particular stuck out.

When asked whether Woodhouse was Archer's father, Benjamin responded with a seemingly surprised "Wow...that is a real possibility."

The parentage of the show's title character has been in question for the entire run of the show, with a number of candidates having already been thrown out there and no solid answers. Woodhouse is the fiercely loyal, and perpetually abused, family butler--think Alfred Pennyworth if simple mistakes resulted in him being told that he was going to have sand rubbed in his eyes.

One fan objected, noting that in flashbacks we've seen the first meeting of Archer's mother Malory and Woodhouse, and that Malory was already very pregnant at the time. Another dismissed the concern with a simple, "People lie."

The only memory Archer has of his biological father took place on his sixth birthday, when his dad gave him a stuffed alligator. He woke up from his trance/dream/whatever state before he could remember his father's face. Woodhouse is depicted as being passed out in the bathroom when the father arrives.

Archer's H. Jon Benjamin: It's a "Real Possibility" That Woodhouse Is Archer's Dad

Fallout Fan Vote Reveals the Best Game in the Series