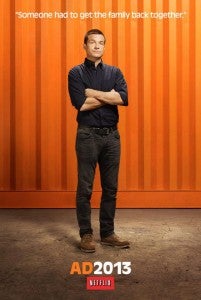 , Netflix unveiled a series of nine character posters for the upcoming fourth season of Arrested Development, set to begin streaming on the popular movie website next month.

But there were no characters in them.

Rather, each character got a familiar prop from the series that cleverly alluded to their identity, along with a catchphrase that would confirm it for those in the know.

This time around, though, there are nine more posters, one for each principal character...and there are characters on them!