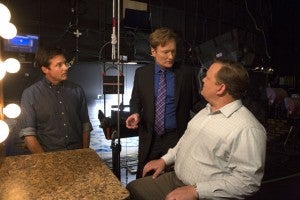 It's an interesting choice for a first official still--only one member of the Arrested Development cast appears in this image, which shows Michael Bluth talking to Andy Richter and Conan O'Brien. Without context, it's hard to speculate why he might be there or what might be said, but even money is on at least one joke about premature cancellation from your network television show. Netflix, who are distributing the show, have done a pretty decent job keeping things under wraps so far. The entire fourth season of the series will be unveiled all at once in spring 2013. They debuted this still through--surprise, surprise--O'Brien's Team Coco Productions. Richter, who starred in the series when it was on Fox, is one of a number of previous guest stars already confirmed to be returning for the new season (and more rumored). Among those being widely reported are Carl Weathers, Liza Minnelli, Judy Greer, Scott Baio and Henry Winkler.