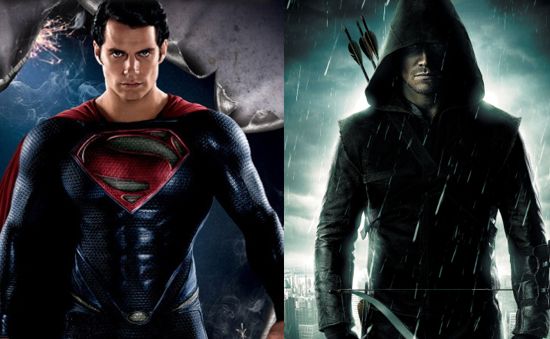 There have been a ton of rumors circulating that DC Comics TV series like Arrow and the upcoming Flash might connect to Warner Bros. movies like Batman Vs. Superman and Justice League. Arrow star Stephen Amell has repeatedly let his desire be known to be a part of Justice League movie.

However, despite the rumors, it appears there are no current plans being made to connect the DC Cinematic Universe and the DC TV Universe. Fandango put the question of the DC Comics film and TV universe connecting to Arrow and Flash executive producer Greg Berlanti.

“We haven't had any of those conversations other than to say, what characters are we allowed to use this year and advocate or request certain ones that are of interest to us,” said Berlanti. “And every now and then, they'll say, 'You can't have that guy.' They don't say why, and we figure out why later on.”

Berlanti added, “Getting to participate in any way in the story – considering how much they meant to me as a kid – is really, I just feel lucky about that all the time. And it evolves the way it's supposed to…When it comes out naturally, that's when it's best. And that's been the fate of Arrow, and I guess that's the path we'll follow.”