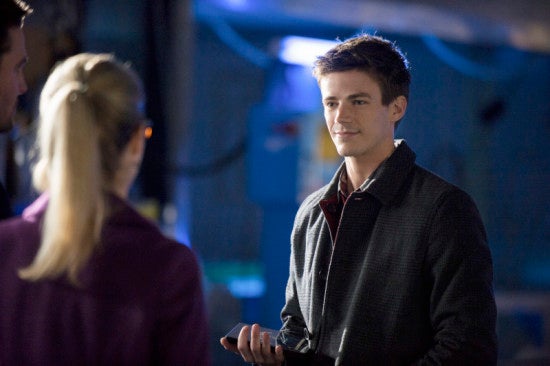 The CW have released an official episode description for "Three Ghosts," the midseason finale of Arrow that pits Oliver Queen and Barry Allen against Cyrus Gold (The Acolyte here; in the comics, he's Solomon Grundy) and Brother Blood.

The second part of a two-part story featuring Barry Allen (and his final appearance, apparently, before Grant Gustin will headline his own pilot as The Flash), the story threatens to kill a character and teases a lot of development among the supporting cast, putting Roy Harper in danger and building a relationship between Felicity Smoak and Barry Allen that could perceivably be carried over into his pilot.

Check it out below, followed by a few educated guesses on our part... 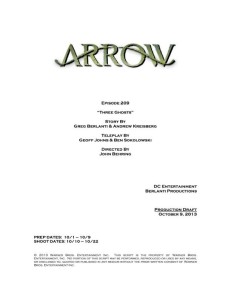 OLIVER IS VISITED BY GHOSTS FROM THE PAST — After a fight with Cyrus Gold AKA the Acolyte (guest star Graham Shiels), Oliver (Stephen Amell) is drugged and left for dead. Determined to cure him, Felicity (Emily Bett Rickards) makes a risky decision. The cure causes Oliver to hallucinate, and what he sees forces him to confront his past. Meanwhile, Barry (guest star Grant Gustin) continues to help Felicity, and their connection grows stronger. The Arrow asks Lance (Paul Blackthorne) to look into Gold, but when the stakeout on Gold goes bad, someone is killed. Roy (Colton Haynes) is captured and tortured by Brother Blood (guest star Kevin Alejandro). John Behring directed the episode with story by Greg Berlanti & Andrew Kresiberg and teleplay by Geoff Johns & Ben Sokolowski (#209).

Alright, so "Three Ghosts," and Oliver confronting his past through them? It seems the smart money would be on his father as well as Malcolm and Tommy Merlyn (assuming he doesn't know by this point that Malcolm is alive, but we're guessing he won't). That would give fan-favorite actor Colin Donnell, who was written off at the end of the first season, to reappear. Another possibility is that Oliver will see some of the people he's killed. That might exclude his dad but still leave at least one of the two Merlyns, along with somebody significant like Count Vertigo.

The risky decision Rickards uses to cure Oliver from his drug-induced state? Well, there are two big drugs floating around this season, and both of them have been weaponized at one point or another: Vertigo, and Miracle. The likely candidate here is Miracle, since that's what Brother Blood and his group has been using as a weapon right along--but when they know there's a chance that it will actually make him more powerful, is that something they'd inject him with? Perhaps the weaponized Vertigo from last night's episode is a more likely candidate.

When Quentin Lance stakes out Cyrus Gold, it goes bad and somebody gets killed? Given that Cyrus has Deathstroke-like powers, that seems pretty bad for Lance--as does the fact that they recently revealed his middle name to be Larry, the name of Black Canary's dead husband...but we're guessing it goes the other way. It would actually be more engaging to give Lance yet more problems at work, having killed somebody while on an unauthorized personal errand--and Gold, of course, could then rise from the apparent dead. With the Miracle coursing through his veins and his brain dead, could we see a more zombie-like Gold taking on the role of Solomon Grundy by the end of the season?

And Brother Blood facing off with Roy Harper? Is this an '80s issue of Teen Titans? We're guessing this is where Brother Blood's identity becomes known to Team Arrow and that from here on in, it becomes a political arms race between the vigilantes and Blood. It will also be interesting to see who might show up, since it looks as though Deathstroke's abilities will be at least partially Miracle-driven, and he's similarly a former Titans foe.

A video posted to Facebook yesterday, seen below, in which they tease "Roy having scenes with other people besides Thea," and stopping to hover over the possibility of sharing some screen time with Slade. After naming off a number of characters in Starling City in the present day, Amell enthused "Slade!" and the pair awkwardly explain why it couldn't happen--just awkwardly enough to be either a hint or a really tantalizing mislead.

It's too bad that Barry Allen is so young; if Roy Harper is going to be fighting Brother Blood and Deathstroke, it would have been nice to have Wally West by his side.