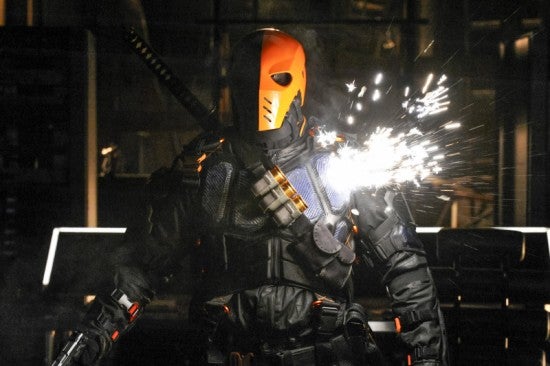 Deathstroke takes it to Team Arrow in their home in a newly-released clip from tomorrow's episode of Arrow, titled "The Man Under the Hood." The episode, which sees the first on-screen appearances of Caitlin Snow (Killer Frost) and Cisco Ramon (Vibe) from The Flash pilot set to spin off from Arrow, sees the group down a member (Roy Harper left town at the end of last week's episode, "Deathstroke") and unprepared for the attack, which feels reminiscent of Bane lying in wait for Batman at the end of Knightfall (or, you know -- not entirely unlike Oliver's fevered nightmares in "Three Ghosts"). Check out the clip below. "The Man Under the Hood" airs tomorrow at 8 p.m. EST.