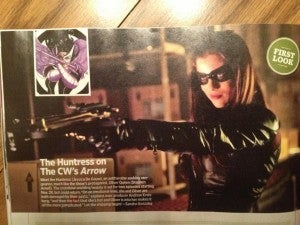 The new issue of Entertainment Weekly, in stores today, has fans's first look at Helena Bertinelli, also known as The Huntress, as she'll appear in the November 28 episode of Arrow, titled "Muse of Fire." The episode is co-written by DC Entertainment Chief Creative Officer Geoff Johns. At right is a scan of the image, provided by Green Arrow TV. "On an emotional level, she and Oliver are both damaged by their pasts, and then the fact that she's hot and Oliver is into her makes it all the more complicated," executive producer Andrew Kreisberg told the magazine. Jessica De Gouw's character is set for two episodes, but could come back for more.

Arrow: First Look at The Huntress