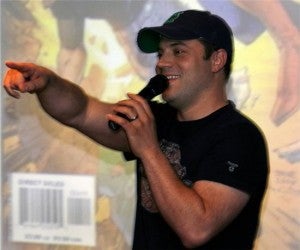 DC Entertainment announced last night via the DC Comics blog, The Source, that Geoff Johns, the company's Chief Creative Officer and the fan-favorite writer of Green Lantern and Aquaman, will tackle an upcoming episode of the CW series Arrow, which follows the exploits of DC's Green Arrow.

"I'm thrilled to be writing this episode of Arrow,  said Johns, "and while I can't give too much away, I think comic fans are going to like what we have in store for them – keep an eye out for the Huntress."

The episode in question, "Muse on Fire," will be the seventh of the season. Jessica De Gouw appears in the episode as Helena Bertinelli, the Huntress, and Jeffrey Nordling will play her father, crime boss Frank Bertinelli.

Johns wrote some of the fans' favorite episodes of the later seasons of Smallville, featuring appearances by the Legion of Super-Heroes, the Justice Society of America, Blue Beetle and Booster Gold. He also, according to a tweet quoted by Green Arrow TV, may have more than one episode in the offing for the first season of Arrow.

"The 1st episode of ARROW I wrote w/ @mguggenheim & @AJKreisberg shooting 2day," Johns tweeted, which not only indicates that he'll share the writing credit with Arrow's showrunners but that he may have written more than one episode with them.

Of course, it could also just be that he expects the show to be picked up for a second season, and that he'll write another episode then. Johns seemed to limit himself to once a season for Smallville in spite of the popularity of his episodes, so it wouldn't be surprising to see him do the same with Arrow.