This week's episode of Arrow, titled "The Scientist," introduced Barry Allen to the world of the show in a way that it's no secret has been designed to lead to a pilot for The Flash.

It'll be Barry's first time on the small screen in a while; there was a short-lived Flash TV series once already, and he did appear on an execrable pilot for Justice League of America that never got picked up, but when the animated Justice League and Justice League Unlimited series happened, it was Wally West who was The Flash in the comics and he stepped in to fill the role on the cartoons. Wally arguably fit those better, as he was a more acerbic and youthful figure in the comics. They're trying to pump some of that into Barry here, it seems.

The series is already starting to get some seeds planted for it; not only will it have Arrow's rogues gallery to choose from and presumably Felicity Smoak to rely on for intel...but it also seems as though we've got an archenemy in the offing. So it's probably not surprising that there would be one or two nods to Barry's future.

The episode, though, is co-written by longtime Flash scribe and certifiable Silver Age DC nerd Geoff Johns, and so it didn't feature one or two--it featured a ton of wink-and-a-nod moments hinting at DC's future as the Fastest Man Alive.

Here's a list--and let us know if we missed one: 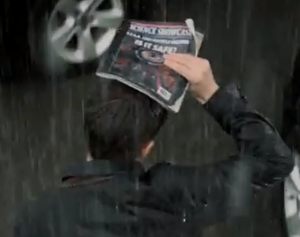 One of the first shots of the episode--and our first exposure to Barry--is the cover of a science digest dealing with the S.T.A.R. Labs particle accelerator.

Ever since it was first mentioned at the beginning of the season, fans have been speculating that a mishap with the device could be responsible for giving Barry his speed powers...and now we're seeing a headline blaring "Is it safe?" and Felicity debating Barry as to whether it's a good idea to even turn it on. There's a further reference to it on the news later, just in case you missed all of this or didn't get that it might be important.

Barry Allen stands in front of a rack of chemicals (poorly and dangerously organized chemicals, at that--the kind of thing that might create a suspiciously impossible to replicate accident!) when lightning crackles in the distance.

Is that an homage to Barry's comic book origin, suggesting that it won't happen exactly like that in the series because of the particle accelerator? Or is it EXACTLY how it will go down on the show because the particle accelerator will create some kind of weather or geological effect, as was implied by Felicity talking about seismic activity as a result of the Large Hadron Collider? I guess we'll see next week...! 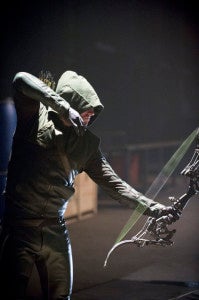 There's a bit of an on-the-nose criticism of Oliver if I ever heard one. Faced with the fact that Barry had lied about who he really is in his mission to solve his mom's murder, Felicity responds, "What do we do every day?"

The comparison of Oliver's vigilante activity to Barry's lifestyle...well, it's hard to ignore that, sooner than later, Barry will be donning a pair of red tights and following in Ollie's footsteps.

The killer of Nora Allen was a blur or a tornado, but when Barry looked at it just right, he could see a person inside? Sounds like somebody with super-speed, right?

Well, in the comics, her killer was in fact Eobard Thawne, "Professor Zoom."

Who's he? Well, that's a bit of a prickly one. Long story short, he's the descendant of Cobalt Blue, a supervillain who Barry and his nephew Wally West, who succeeded Barry as The Flash in the comics (and then preceded him, since Barry returned later), faced off against at different times. Cobalt Blue, also known as Malcolm Thawne, was Barry Allen's twin brother.

Yeah, different last name. Weird, right? Well, basically it boils down to this: two women gave birth on the same night--Nora Allen to twins and Charlene Thawne to a stillborn child. The doctor, in a misguided attempt to be "fair" (he'd been drinking), gave one of Nora's children to the Thawnes, telling her that one of the twins was stillborn. So everybody gets a baby, everybody wins! Or something.

Centuries later, Eobard Thawne is his distant descendant, taking on the role of the Reverse Flash in the 25th Century. Ironically, Eobard never successfully embraces the legacy of Cobalt Blue and instead turns into a twisted reflection of the Allen side of the family tree.

Arrow: How Tonight's Episode Told The Story Of The Flash