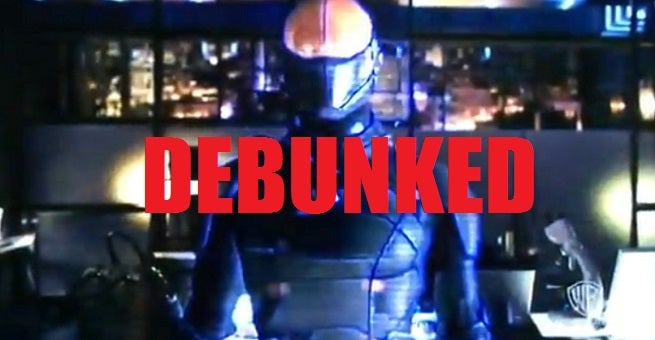 As many of our readers suspected, the Arrow story we ran yesterday is a mistake.

The image purported to be the first look at the new A.T.O.M. Exosuit, which appeared in a video from SpoilerTV and has spread around the Internet, is not real footage from this week's fall finale of The CW's Arrow.

While the low quality of the video and the prevalence of international spots that spoil much more than U.S. teasers (we've seen this often for The Walking Dead, for instance), led us to believe that it was genuine, a closer look at the Warner Bros. watermark made us question that stance and reach out for confirmation.

A number of readers objected to the footage on the grounds that the WB logo was there at all, but in many international markets Warner Bros. does have their own branded TV stations. the absence of a CW watermark is not a guarantee of a bad image -- and Spoiler TV often finds things before they're widely available, often being one of the first sites to post things like promotional photos from upcoming episodes of Arrow and The Flash, so the site hosting the video had some credibility in their coverage.

That said, while the rest of the trailer features the "TV" directly to the right of the WB logo and "Television" underneath, those elements are absent from the watermark above. Complicating that analysis was the fact that the poor quality of the image, combined with the background coloring of elements around the WB shield, made it difficult to be certain those elements were missing at first. 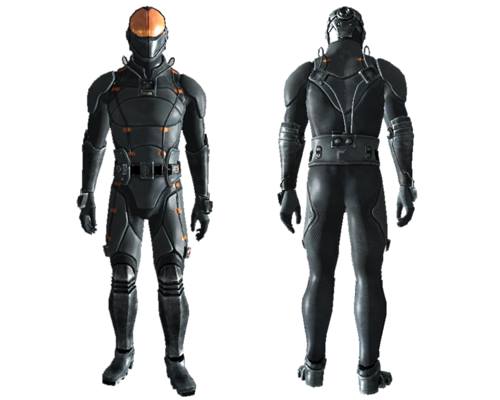 As for the suit itself, many readers noted that it appeared to be the Chinese Stealth Armor from Fallout 3, which was presumably chosen by whoever perpetrated the hoax because it somewhat resembles the CGI mockup of the suit teased in a recent episode of Arrow.

You can see that at right.

More on this later.