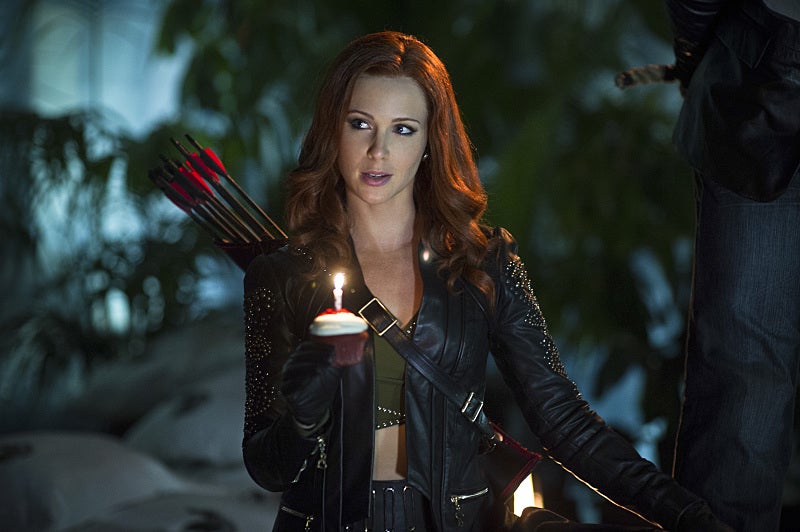 "Draw Back Your Bow" opens with a flashback to Deathstroke's Mirakuru riots months prior (from the end of Season Two). As Deathstroke's soldiers attack a woman, Carrie Cutter, Arrow stops them. He leaves behind an arrow that he fired on the soldiers, which Cutter keeps for herself.

In the present at Stanzler's death scene, Arrow retrieves the arrow that killed him and his two guards. The arrow head is shaped like a heart.

Back in Oliver's time in China, he and Katana try bonding while Maseo goes out on a mission. When Maseo doesn't return home, Katana begins to worry. She and Oliver decide to search for him, starting with his last known location. As they stake the site out, Katana reveals her and Maseo's history. She and Maseo used to live in Japan, but had to flee because they upset "some very powerful men." Finally, members of a drug triad show up to the site. Oliver tries asking them what they know about Maseo, but they attack him. Katana rescues him, and gets the men to reveal what they know. Unfortunately, the goons say that Maseo was killed by the triad. Katana and Arrow return home, but find Maseo waiting for them there. Apparently, the triad thugs had the wrong information.

Felicity stops into Ray Palmer's office, where she—of course—finds him Salmon Ladder pull-ups, shirtless. (Side note: The CW should really start selling their own Arrow branded Salmon ladders.) Ray asks her if she will come to a business dinner with him. She tries says no, but Ray bribes her with a blue Coutur dress. She accepts.

Back in Arrow's base, Arrow and Diggle investigate the heart-shaped arrow that killed Stanzler. As they theorize who the killer may be, they assume it's a man. They want Smoak to run some forensic tests, but she's too busy. Arrow and Diggle find her on TV at a press conference with Ray Palmer. Feeling a bit jealous, Oliver pounds away at the killer's arrowhead. It shatters, revealing a hidden message inside, like a fortune cookie. The message has an address: 15 Baron St. Arrow and Diggle rush to the address, which is filled with totems to Arrow, and more hear-shaped arrows.

The killer reveals herself to Arrow and Diggle over a broadcast. She reveals that she's a massive admirer of Arrow's. Since Arrow spends so much time taking care of others, the killer says she's going to take care of Arrow—by killing more criminals. She texts Arrow a picture of her next victim, a drug dealer, awaiting execution at an unknown location.

Arrow returns to his base, where he finds Roy reading a news story about the cop he mistakenly murdered while overdosed on Mirakuru. Oliver tells Roy that he shouldn't torment himself over it, but Roy ignores the advice. Felicity shows up, where she and Oliver try finding leads on the admirer's identity. Felicity asks for the night off so that she can go to the business dinner with Ray. Oliver begrudgingly allows her. Before she goes,Felicity traces the phone number that the admirer texted Arrow with, and identifies her as Carrie Cutter, a former Starling City cop. Arrow recognizes her from somewhere, but hasn't made the connection that it's the women he saved months before.

Identifying a bag of fertilizer in Cutter's image of the drug dealer, Smoak surmises that they can only be at one specific florist in Starling City. Arrow takes Aresnal to the florist. When the two arrive, they split up to cover ground. Cupid ambushes Arsenal and knocks him out. She then tells Arrow that they need to be together, before hanging the drug dealer. Arrow cuts down the noose, but allows Cupid to escape. When Arsenal and Arrow return back to base, Diggle says that Cutter has a history of obsessive stalking. Oliver decides to visit the Starling Police psychiatrist that deemed Cutter unfit for duty. Arrow visits the psychiatrist. She tells Arrow that Cutter suffers from obsessive fixations. The only way to break Cutter from them is to deliver her the harsh truth. Lying to Cutter will only anger her.

After talking with Oliver, Diggle senses his jealousy towards Felicity and Ray's budding romance. Diggle decides to take control of the situation, and confronts Felicity about her dinner with Ray. He accuses it of being more than work function. Felicity says that Oliver had his chance at dating her. And if Oliver has a problem, she says, then he needs to discuss it himself. She meets Ray later that night. He gives her a diamond necklace worth $10 million. Felicity is moved by the gesture.

Elsewhere, Cupid meets up with her accomplice. The Smoak to Cupid's Arrow, the accomplice runs an algorithm to track all of Arrow's known locations, and which locations he visits the most. His program deduces that Arrow's most-visited location is the Verdant night club. After killing her assistant, Cupid heads for Verdant.

Back at the base, Arrow receives a call from Detective Lance. Lance found Cupid's dead accomplice. Angry, Arrow demands that Smoak should be helping out more with the mission instead of having dinner with Ray. When Diggle presses him on his frustrations with Smoak and Ray, Oliver admits that he is upset to see Smoak move on towards a new lover. He leaves to find Cutter.

At the business dinner with Ray, Smoak receives a text from Diggle. She quickly helps Diggle locate Cutter's location at Verdant, then and uses her charm to seal the business deal that Ray was gunning for. Judging by the She calls Ray inspiring individual. Across town, Cutter enters Verdant's opening night. Arrow calls her. He says that he'll meet with her, just at any location but Verdant. Cupid says that if Arrow doesn't show up at the new location, she'll return to Verdant and kill everyone there.

Arrow arrives at Cutter's chosen scene—the location where he saved Cutter during the siege of Starling City. Arrow tells Cutter that she's not well, and says that he has no feelings for her. He then says that he understands her pain, saying that he has someone in his life that he loves, but can't be with (clearly referring to Smoak). Back at the Arrow base, Smoak and Diggle hear the entire speech. But Cupid thinks that Arrow is lying. Sent into a rage, she attacks Arrow. They fall through a large subway gate underground, blocking Arrow's communications signal. Cupid says that if she can't have Arrow, then no one can. She almost allows a train to run the both of them over, but Arrow moves them out of the way. They're alive, but Cupid is crazy enough to believe that it was Arrow's way of proving his love. Sorry Arrow, but it looks like you'll have a super stalker for the foreseeable future.

Arrow and Diggle turn Cupid over to A.R.G.U.S. and Amanda Waller. Cupid is given a spot on Waller's Suicide Squad. Over at Verdant, Thea starts flirting with the club's new DJ. The two kiss. A piece of advice, lover boy: Beware jealous ex-boyfriends with Mirakuru running through their veins. But Arsenal isn't the only archer who's about to get burned. Smoak returns to Queen Consolidated, where she meets Ray Palmer. The two kiss as well. But unbeknown to them, Oliver sees the entire smooch. Oliver returns to Verdant, furious. He find Roy there, and the two decide to spend the evening having dinner with Diggle and his family.

After kissing Felicity, Ray returns to his office. He access files on his prototypical A.T.O.M. suit, projecting a holographic image of the suit. Here comes the Atom!

Across town, a man is killed by an unidentified assailant. The assailant's weapon of choice? A boomerang. That's right folks, Digger Harkness—a.k.a. Flash villain Captain Boomerang, is in Starling City. Talk about a Flash/Arrow crossover appetizer.

Arrow Recap With Spoilers: "Draw Back Your Bow"